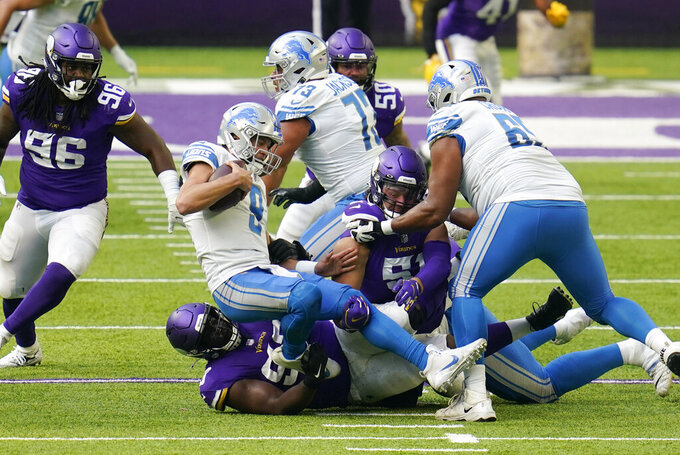 Detroit Lions quarterback Matthew Stafford (9) is sacked during the first half of an NFL football game against the Minnesota Vikings, Sunday, Nov. 8, 2020, in Minneapolis. (AP Photo/Jim Mone)

MINNEAPOLIS (AP) — Detroit Lions quarterback Matthew Stafford spent the practice week in COVID-19 protocols, not getting on the field with his team and unsure he would be able to suit up for Sunday’s game in Minnesota.

Another set of protocols cut his game day short.

Stafford left Detroit’s 34-20 loss to the Vikings in the fourth quarter for concussion testing after a sack, adding to a tough week for the team’s longtime franchise quarterback. Stafford, who previously passed COVID-19 testing, also passed concussion testing and was cleared to travel back to Detroit with the team.

“The week was obviously a different one, a little bit of a stressful one,” Stafford said. “No excuse, got to come out and play better.”

It was nearly Daniel’s game from the beginning.

Stafford was placed on the Reserve/COVID-19 list earlier in the week. That list was created for players who either test positive or have been in close contact with an infected person. Stafford passed all tests and, after flying to Minnesota privately on his own, was able to play Sunday.

Being placed on the list was just one of his worries leading up to the game.

On Friday night, one of his daughters fell off a high chair and landed on her head, according to an Instagram post by Stafford’s wife, Kelly. In the Instagram post, Kelly Stafford had worried about getting help for her daughter because of Stafford’s status on the COVID-19 list.

“So here I was with zero family around, panicking about hunter and realizing NO neighbors would come over because everyone thought we had covid,” Kelly wrote in Saturday’s post. “I will never understand why the NFL players health information is released to media and the whole world.. I am honestly pleading that they stop.”

After Sunday’s game, Stafford said his daughter was doing better. Kelly revealed in the Instragram post that her daughter had sustained a concussion.

Throughout the week, Stafford was left to prepare himself mentally by participating in meetings via video conferencing and watching video of practices.

“Mentally, just trying to be in every meeting I could be,” Stafford said after the game. “Our video department and coaches did an awesome job making sure I was able to get in all those and be a part of it. Obviously, Chase ... did an outstanding job preparing the guys. They were the guys out there in practice getting the reps and they did a nice job. I was just trying to do my part to make sure I was mentally and physically ready to go.”

Stafford completed 16 straight passes in the first half during a strong start, but turnovers ruined his day in the second half.

He threw an interception to Eric Wilson in the red zone when he didn’t see the linebacker. On the next drive, he was intercepted by linebacker Eric Kendricks in the end zone.

“Just mistakes,” Stafford said. “I felt like I was playing at a pretty good clip there for a little bit. Obviously, some throws I’d like back. The two interceptions were bad decisions. The first one was a bad decision. The second one, just a poor throw, probably got to throw it higher.”

The game added to a tough season for Stafford.

Three months ago, the Lions removed Stafford from the COVID-19 list after saying he received a false positive test result. The news received attention due to his stature in the league and because his wife had surgery last year to remove a brain tumor.

Kelly Stafford had plenty to say on her Instagram page in August after the false positive test, lashing out at the league for publicly putting her husband on the list.

“It weighs on me,” Stafford said of the continued off-field concerns. “I got a lot more grays in my beard now than I used to. That might just be age, too. I love playing this game. This year has been difficult for everybody; everybody in the league, everybody around the world. This is a really unique situation and a really tough one. I’m one of the people that’s lucky enough to get to do their job.”