Steelers, Broncos meet with plenty of questions at QB 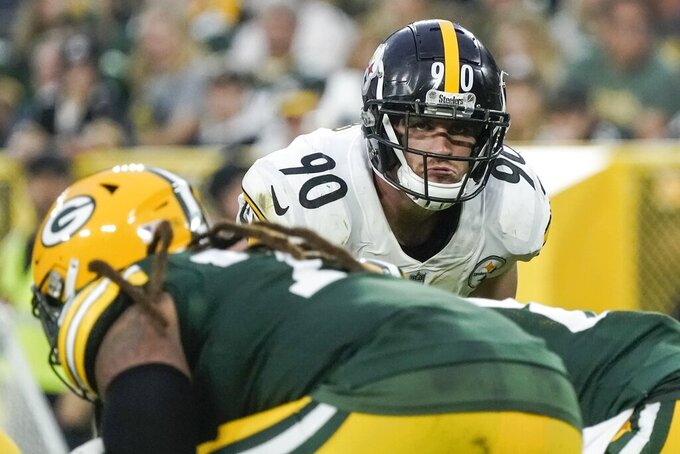 Pittsburgh Steelers' T.J. Watt looks to rush during the second half of an NFL football game against the Green Bay Packers Sunday, Oct. 3, 2021, in Green Bay, Wis. (AP Photo/Morry Gash)

PITTSBURGH (AP) — The number of Ben Roethlisberger doubters is growing by the week. Roethlisberger isn't among them. Neither is Denver Broncos coach Vic Fangio.

Fangio remains plenty wary of the 39-year-old Pittsburgh quarterback as the Broncos (3-1) travel to Heinz Field to take on the struggling Steelers (1-3).

“The one thing is that there’s a narrative out there that he’s gone down and I don’t see that,” Fangio said. "I’ve been watching this guy a long time. He’s still capable of doing everything he’s always done. He throws a great deep ball and has good pocket feel. I don’t buy into that narrative at all.”

Roethlisberger is the 27th-rated quarterback in the NFL, has thrown as many interceptions as touchdowns (four) and is dealing with injuries to both his left pectoral and his hips.

“Well, we know it’s early,” Roethlisberger said. “We’ve played some good football teams and we feel like we’re making some progress. We just have to find a way to, at the end of the game, have a ‘W’ on the board. You can play well and all those things and get better, but at the end of the day, you want to win the football game.”

The Steelers haven't dropped four straight since 2016. That team recovered from the midseason swoon to reach the AFC championship game. This group simply needs to find a way of falling further behind in what looks to be an ultra-competitive AFC North.

Even with the Broncos off to their best start since 2017, they remain a work in progress. Their first three wins were against teams who are a combined 2-10. A dismal blowout loss to Baltimore at home last week — a game in which starting quarterback Teddy Bridgewater left with a concussion — did little to silence their skeptics.

A win in Pittsburgh, even against the current semi-disjointed version of the Steelers, would go a long way to showing Fangio is making progress in his fourth season.

"Practice this week has to be more amped than it’s been in weeks prior, and then it can’t just stop there right. It has to carry over to a tough environment going into Pittsburgh and finding a way to win on Sunday.”

Bridgewater spent the week in the concussion protocol, meaning there's a chance Drew Lock gets the start. Lock started in Pittsburgh during Denver's visit in Week 2 last year before being knocked out with a shoulder injury in the first quarter of what became a 26-21 loss.

Lock didn't exactly thrive after going in for an injured Bridgewater against the Ravens. He completed just 12 of 21 passes for 113 yards with an interception, though Fangio made it a point to lay the blame on an entire offense that managed just 254 yards.

“I still think his below-average play was just a part of our whole offense that day,” Fangio said. "We just weren’t very good offensively last Sunday.”

The Steelers haven't been good offensively all season. That needs to change and change quickly if they want the questions about whether Roethlisberger's issues are fixable or not to stop.

The Broncos have a terrific 1-2 punch out of the backfield in Melvin Gordon II and rookie Javonte Williams. They combined to average 6.5 yards a carry last week but were underused by OC Pat Shurmur (only four carries after halftime, 16 altogether in 23-7 loss to Ravens).

Williams, who leads the NFL with a 37% missed tackle rate according to Pro Football Focus, had a carry-the-entire-Ravens defense run of 31 yards.

“I’m really not surprised, but I am still wowed at the fact he dragged a dude 17 yards,” said fellow rookie Caden Sterns. “That’s crazy. You don’t see that very often.”

The Steelers put rookie offensive linemen Kendrick Green and Dan Moore Jr. in a difficult spot in asking them to become part of an entirely overhauled group and come together in time to salvage the twilight of Roethlisberger's career.

The early going has been rocky, though there were small signs of progress last week in Green Bay after the team ran for a season-high 62 yards and saw Roethlisberger hit only five times in 45 drop-backs.

Green, who largely played guard at Illinois before the Steelers took him in the third round and moved him to center, doesn't think the team is asking for too much, too soon.

“I feel like if you can’t deal with pressure, you know, the NFL is probably not for you, right?” Green said. “So (winning) is expected, that’s what I feel like. That’s in the job description, you know what I mean? So it’s something we take pride in.”

The Broncos feature perhaps the league’s top safety duo in Justin Simmons and Kareem Jackson, but Sterns is making the most of his limited opportunities.

He’s not angling for playing time in the Broncos’ base defense, however.

“The two safeties we have are the best in the league and I’ll argue with anybody who says differently,” said Sterns, a fifth-round pick from Texas. “… My role is to play dime and I’m going to do that 100%.”