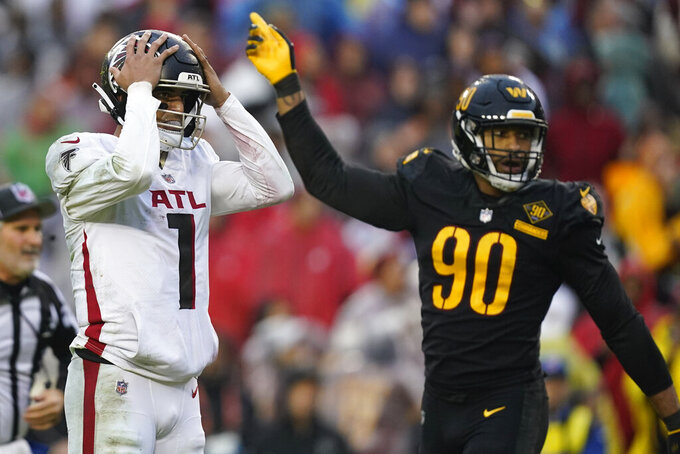 Atlanta Falcons quarterback Marcus Mariota (1) and Washington Commanders defensive end Montez Sweat (90) reacting to an interception thrown by Mariota during the second half of an NFL football game against the Washington Commanders, Sunday, Nov. 27, 2022, in Landover, Md. Washington won the 13-19. (AP Photo/Patrick Semansky)

TURNOVER DIFFERENTIAL: Steelers plus-2; Falcons minus-1.

STEELERS PLAYER TO WATCH: WR George Pickens. The rookie returns to Georgia less than a year after helping the Bulldogs capture a national title. He quickly has developed a rapport with Steelers rookie QB Kenny Pickett, who has made it a habit of looking for the 6-foot-3 Pickens whenever he runs into trouble. Pickens' 14.2 yards per reception ranks in the top 15 in the league and he is the only receiver on the team who consistently makes plays down the field.

FALCONS PLAYER TO WATCH: RB Cordarrelle Patterson. With Kyle Pitts done for the year and rookie WR Drake London struggling to contribute, there's even more of a burden on multidimensional Patterson to give the offense an explosive element. Over the past two weeks, he's averaged nearly 5 yards per carry and set an NFL record with his ninth career kickoff return for a touchdown. This week, he'll be facing a kickoff unit that allowed the Colts to average 45 yards per return last Monday.

KEY MATCHUP: Falcons QB Marcus Mariota vs. Steelers' pass coverage. Mariota is looking to bounce back after throwing a crucial interception at the goal line that cost Atlanta a shot at beating the Commanders. He may have a chance to open up a run-oriented offense against the league's 30th-ranked pass defense.

KEY INJURIES: Steelers RB Najee Harris is dealing with an abdominal injury sustained in the first half against Indianapolis. His status is uncertain. ... Backup RB Jaylen Warren missed the Colts game with a hamstring injury and could be out again. ... Falcons TE Kyle Pitts already was on injured reserve, but the team revealed that he's done for the season after undergoing knee surgery. ... G Elijah Wilkinson was designated to return from injured reserve and could play against the Steelers if the Atlanta coaches deem him ready. ... OLB Arnold Ebiketie (forearm), OL Chuma Edoga (knee) and DL Jalen Dalton (toe) have been slowed by injuries.

SERIES NOTES: The Steelers are playing in Atlanta for the first time since 2014. ... Atlanta's previous win in the series was a 41-38 overtime triumph in 2006. ... The Steelers went more than a quarter-century without losing to the Falcons, ripping off nine straight victories and a tie between Atlanta's wins in 1970 and 2006. ... Pittsburgh S Damontae Kazee was a fifth-round pick by the Falcons in 2017 and spent his first four seasons with Atlanta.

STATS AND STUFF: The Steelers are attempting to win consecutive games for the first time this season. At 4-7, Pittsburgh is off to its worst start under head coach Mike Tomlin. The Steelers need to win five of their last six for Tomlin to avoid the first losing season of his 16-year career. ... Pittsburgh is 40-29-1 all time the week following an appearance on “Monday Night Football.” Tomlin is 13-7-1 on a short week. ...The Steelers’ 59 wins on five days' rest rank second in NFL history behind San Francisco (61). ... Pittsburgh is 37-31 in domed stadiums, including 13-7 under Tomlin. The Steelers’ .650 winning percentage in domes under Tomlin is the best in the NFL by a non-dome team since Tomlin took over in 2007. ... Pittsburgh’s improving running game is taking some of the pressure off Pickett. The Steelers have topped 100 yards in four straight, with backup RBs Benny Snell and Anthony McFarland chipping in during the second half against Indianapolis with both Harris and Warren unavailable. ... Steelers WR Diontae Johnson, a Pro Bowler last season, is still searching for his first touchdown of 2022 despite having 94 targets, by far the most on the team. ... Pittsburgh LB T.J. Watt was quiet last week against Indianapolis (three tackles, one QB hit). Fellow OLB Alex Highsmith, however, collected his 10th sack. ... Falcons rookie RB Tyler Allgeier leads the team with 552 yards rushing. He is 82 yards away from surpassing Jerious Norwood for the second-most yards by a rookie runner in franchise history. Williams Andrews tops the list with a 1,023 yards in the 1979. ... Mariota has thrown 30 passes in only two games this season. ... In a rare bright spot for the defense, Atlanta's 10 interceptions are its most through the first 12 games of the season since 2015. ... The Falcons haven't finished above .500 since 2017 and they'll need to win four of their last five to break that streak. Yet, despite a losing record, they are just a half-game behind Tampa Bay in the weak NFC South.

FANTASY TIP: Steelers TE Pat Freiermuth. A consistent fantasy performer, he's got 47 catches for 521 yards and has been targeted at least four times in every game but one. He'll have another chance to shine against the leaky Atlanta defense.