Steelers rookie LB Highsmith ready to fill in for Dupree 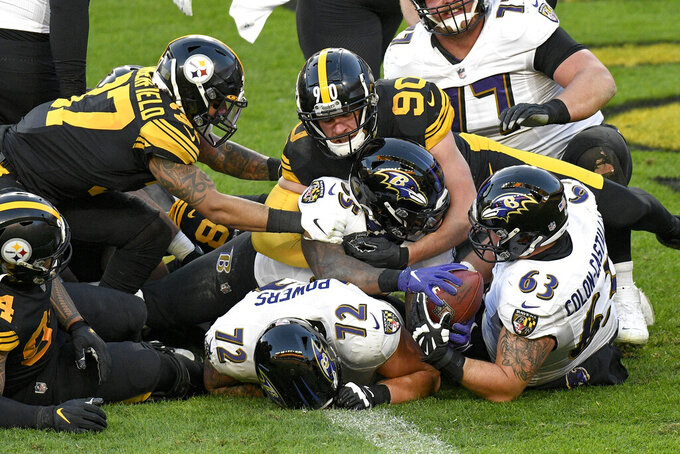 Baltimore Ravens running back Gus Edwards (35) gets into the end zone with a touchdown under Pittsburgh Steelers outside linebacker T.J. Watt (90) during the first half of an NFL football game, Wednesday, Dec. 2, 2020, in Pittsburgh. (AP Photo/Don Wright)

PITTSBURGH (AP) — Bud Dupree stood at the line of scrimmage during a stoppage in play Wednesday against Baltimore and did what the Pittsburgh Steelers linebacker almost always does when there's a lull in action.

Minutes later, the relentlessly upbeat Dupree was limping to the sideline, his right knee shredded and his season over. The immediate impact on the NFL's last unbeaten team was palpable. Perhaps no player felt it more than fellow outside linebacker T.J. Watt. The two have spent the last three seasons evolving into one of the NFL's best edge-rushing duos on the field and close friends off it.

“There's just so much going on when you hear something like that happen,” Watt said Saturday. “Holy cow, his season could potentially be over, (he's) in a contract year, (he's having) such a phenomenal year and is such a key player for what we do and who we are as a defense.”

And now he's gone, the second member of Pittsburgh's linebacking group to have his season wrecked by a knee injury. Second-year inside linebacker Devin Bush went down late in a victory over Cleveland in October. Rather than panic, however, the Steelers persevered, handing the majority of the snaps to Robert Spillane, who made the team as a special teams ace but has held his own while replacing a first-round pick.

Pittsburgh coach Mike Tomlin expects the same from rookie Alex Highsmith. The Steelers grabbed him in the third round of the draft, viewing him as a potential long-term replacement for Dupree, who is playing this season under a one-year franchise tender and is likely to hit the open market next spring.

Highsmith arrived as a bit of a project after playing most of his career at Charlotte at defensive end. Yet he's seen his playing time tick up in recent weeks even before Dupree's injury, including making a tide-turning interception against reigning NFL MVP Lamar Jackson that sparked a comeback victory over the Ravens on Nov. 1.

“He understands. If he doesn’t understand, he asks very intelligent questions," defensive end Keith Butler said. “He has a good football mind and he does what we ask him to do. You only have to tell him once, and he then he gets it.”

The Steelers (11-0) will need Highsmith, Ola Adeniyi and Jayrone Elliott all to “get it” if they want to keep their hold on the top spot in the AFC. Pittsburgh is on its way to leading the NFL in sacks for a fourth straight year and is one game away from tying the league record for most consecutive games with a sack. The Tampa Bay Buccaneers took down the quarterback in 69 games in a row between 1999-2003.

Pittsburgh's current streak happens to coincide with Dupree's evolution from first-round disappointment early in his career to a physical presence who makes teams pay for focusing too much attention on Watt.

Now the Steelers are expecting Highsmith to do the same.

“Those guys work behind the scenes every day working very diligently preparing themselves for these opportunities not only in terms of knowing what to do but just preparing themselves in terms of conditioning for when we ring their bell," Tomlin said. “We are ringing Alex Highsmith’s bell now, so it will be exciting to watch him respond to it. It will also be exciting to watch his growth because growth is associated with experience. No doubt in upcoming weeks he will be gaining a lot of that.”

Starting with Washington. Washington has won two straight games to put itself back into the mix in the NFC East. Washington has given up the third-most sacks in the league and now has to contend with the league's third-ranked defense, albeit one with some notable pieces missing.

Tomlin dismissed the notion that Dupree's absence will make Watt's job more difficult. Watt is making a compelling case for the NFL's Defensive Player of the Year. Watt's 11 sacks lead the league and he's become a weekly nuisance in opposing backfields.

“I don’t think T.J. Watt gets assistance from anyone in terms of his quality of his play,” Tomlin said. “T.J. makes his plays. I don’t think that’s going to be an issue at all. Guys like T.J. don’t depend on anyone.”

Watt doesn't expect Highsmith to become a game-wrecker like Dupree. Highsmith is not as big. He's not as fast. He's not as experienced. He's still very much a work in progress, one that Watt believes can still be a difference-maker as the Steelers barrel to their first playoff appearance since 2017.

“Alex has been preparing like he’s been the starter the whole time,” Watt said. "I have all the confidence in the guys in this locker room that we will be all right.”

NOTES: The Steelers activated DE Stephon Tuitt off the reserve/COVID-19 list on Saturday, clearing the way for him to return Monday against Washington. ... QB Ben Roethlisberger (knee) and K Chris Boswell (hip) did not practice on Saturday and are questionable. DB Steven Nelson (knee) is doubtful.