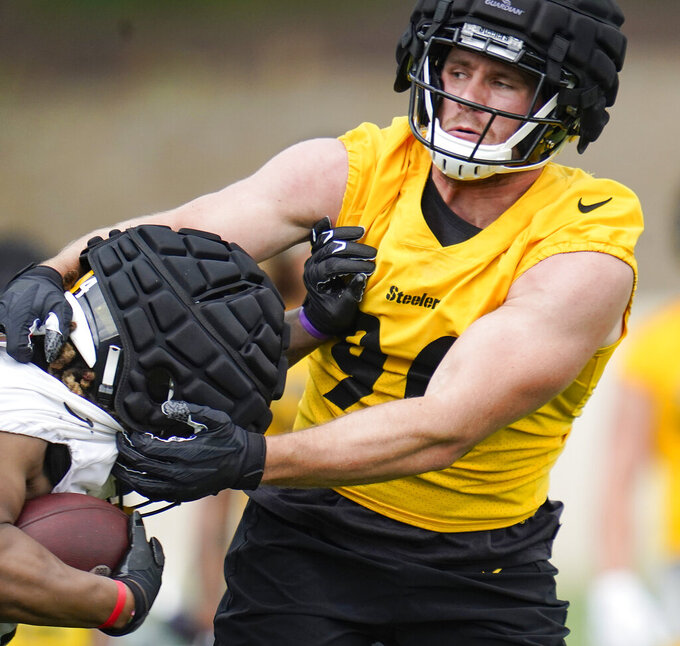 LATROBE, Pa. (AP) — There are moments on the football field when T.J. Watt goes blank. The roar of the crowd drifts away. All but one of the other 21 players on the field, too.

In those moments, it's just Watt and the guy with the ball. The NFL's reigning Defensive Player of the Year can't tell when those moments will arrive. The Pittsburgh Steelers outside linebacker sheepishly can't provide you with too many details once they do.

Which explains why Watt could only offer a small smile when asked about his run-in with rookie wide receiver Calvin Austin III — all 5-foot-9 and 162 pounds of him — during a chippy practice Tuesday. Austin had taken a little pop pass from quarterback Mitch Trubisky and attempted to turn the corner.

Watt's corner. It didn't go well. Not for Austin anyway.

“Sometimes you black out and you're just trying to have fun, get people involved," Watt said.

Those blackouts have become more frequent as Watt evolved from “J.J.'s little brother” to one of the best pass rushers of his generation. He signed one of the richest defensive contracts in NFL history on the eve of the 2021 season, then repaid that investment by tying a league record with 22 1/2 sacks and easily topping the voting as the best defender in football.

It was, by nearly every metric, a historic season. Every metric but one. The one Watt knows — beyond the sacks and the splash plays and the unique brand of havoc he creates nearly every weekend in the fall — he will ultimately be measured by not matter how many pages of the team's record the 27-year-old Watt rewrites over the course of his career.

“We've got to win a Super Bowl,” Watt said Wednesday.

Something his team hasn't particularly come close to since he arrived in the 2017 draft. The Steelers haven't won a playoff game during Watt's tenure, the latest setback an ultimately lopsided loss to Kansas City in January, a game that began with Watt returning a fumble on a botched trick play 26 yards for a touchdown to give Pittsburgh a lead that eventually vanished under an avalanche of mistakes by a defense that looked worn out.

The blowout marked the final game of quarterback Ben Roethlisberger's Hall of Fame career. It also signaled an identity shift of sorts for a team whose fortunes for most of the decade relied heavily on Roethlisberger's right arm.

Not in 2022. The offense figures to be a work in progress with free-agent signee Trubisky facing the daunting task of trying to replace a franchise icon. Pittsburgh's best chance at contending in a potentially loaded AFC North will require the defense as a whole to re-discover the swagger that was hard to come by at times last fall.

It's a swagger Watt and defensive end Cam Heyward — two of the three longest-tenured players on the roster — have been trying to imbue during the opening days of practice. The two veterans have served as the tip of the spear in a handful of dust-ups that remain a training camp fixture, jawing — and sometimes more than jawing — at the offensive players in white jerseys during practice.

For Watt, the occasional post-play flex is his way of leading by example, a signal to younger players that it's OK to enjoy doing your job.

“It’s very tough to make a play (so) when you make one, you've got to celebrate,” he said.

A self-professed football nerd who grew up in perhaps the NFL's first family of football nerdiness, the rigors of camp are something to be enjoyed, not endured. He missed the physicality of it last year when he skipped the full-contact portion of practices, a business decision he made to protect his health until he and the Steelers ironed out a new deal.

“As hard as I was working last year, you’re not able to actually show it on the field,” he said. “So it’s definitely refreshing to be able to be out there.”

Necessary, too. Watt is well-versed in Steelers lore. He knows he's the next link in a chain of great Pittsburgh linebackers that goes back half a century. Many of the legends whose company he is trying to keep have multiple championship rings back home.

Watt is still searching for his first. He knows he can hardly do it alone, one of the many reasons the formerly reticent pass-rushing prodigy is more visible — and more audible — in nearly every aspect of his life.

“In order to really help guys out and be a leader, you have to be very comfortable with who you are in this defense, in the locker room, everything,” he said. “I’m very comfortable. I feel like I have so much more to give to the game.”