Steelers use strong 2nd half to beat Cowboys 16-3 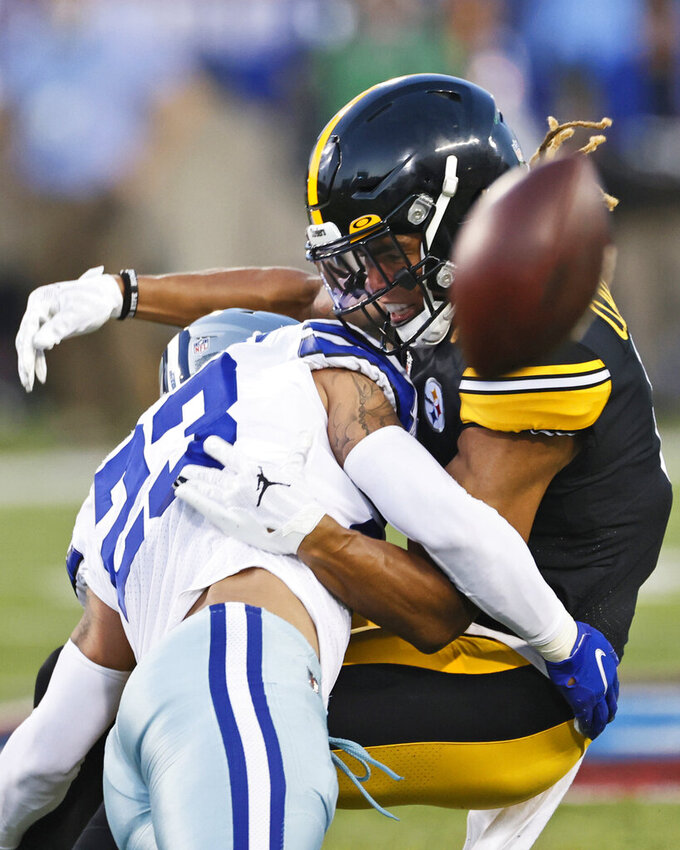 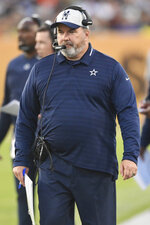 CANTON, Ohio (AP) — The Pittsburgh Steelers followed a stumbling first half with a strong final 30 minutes to beat the Dallas Cowboys 16-3 on Thursday night in the first NFL preseason game in two years.

Matthew Sexton's 36-yard punt return early in the third quarter jump-started the Steelers, and the Cowboys never challenged after it.

Last season's exhibition games were canceled due to the COVID-19 pandemic. So maybe the enthusiastic crowd was an indication that even for a match between teams using few regulars, the hunger for pro football has not faded.

Or maybe it was simply a matter of two of the league's most popular franchises being on the field in the Hall of Fame game, regardless of how many backups were in action.

“Just being in a stadium full of fans, the energy they provided,” Steelers coach Mike Tomlin said. "We were without that for the good part of a year."

Not unexpectedly for the kickoff to the preseason, the game was marked by spotty offense and special teams — until Sexton came through.

“Sexton had a big punt return, I thought that ignited us,” Tomlin added. “That was the springboard for us moving forward.”

Both sides lacked timing with the ball, helping each defense.

Pittsburgh blocked a field goal attempt by Hunter Niswander, and Steelers placekicker Sam Sloman missed from 49 yards, as well a botching an extra point. Niswander also missed from 52 yards and the opening half finished 3-0 thanks to Niswander's 29-yarder.

Sexton's runback led to a 4-yard scoring run by much-traveled running back Kalen Ballage, now with his fourth team in as many years. Sloman made amends with a 48-yard field goal after a 26-yard interception return by Donovan Stiner.

Dallas left 16 key players at its training base in California, yet in the opening half still looked superior to Pittsburgh. Not so after halftime.

“This is more about building with what we accomplished,” Cowboys coach Mike McCarthy said. "There's definitely a lot of work to do. We need to play better complementary football ...

“The (defensive) operation for the first time out, I felt good about it. We've got a lot more to offer.”

“It felt great,” said Collins, who missed last season with a hip injury. “It’s been over a year and it’s been a long process to get here. It felt good to be out there on that field with my team today.”

But this was a night to look at the back end of the roster. Both defenses were solid enough, with Pittsburgh's vaunted pass rush getting lots of pressure on Dallas QBs. Dwayne Haskins, seeking a job after flopping in Washington, quarterbacked most of the night for the Steelers, though it was holdover Josh Dobbs who connected on a 5-yard touchdown pass to Tyler Simmons to put it away.

Nineteen of the 20 living inductees to the hall were introduced before the game. Only former Pittsburgh safety Troy Polamalu, who tested positive for COVID-19 and whose attendance this weekend is uncertain, was not on hand.

The Cowboys might be the self-proclaimed America's Team, but not when they invade Northeast Ohio. Sure, this is Browns territory, but it's also just a two-hour ride from Pittsburgh.

So Hall of Fame Stadium was filled with black and gold, with a decent smattering of blue and white for the Cowboys.

Naturally, the loudest cheers from the crowd of 20,113 were reserved for Cowher, Shell and Faneca, former Steelers stars.

Pittsburgh WR Chase Claypool was shaken up on a diving 45-yard reception in the second quarter, but walked off by himself. Tomlin said he is fine.

Dallas tackle Isaac Alarcon was helped off the field in the third period.

Pittsburgh takes on the Eagles at Philadelphia next Thursday night.