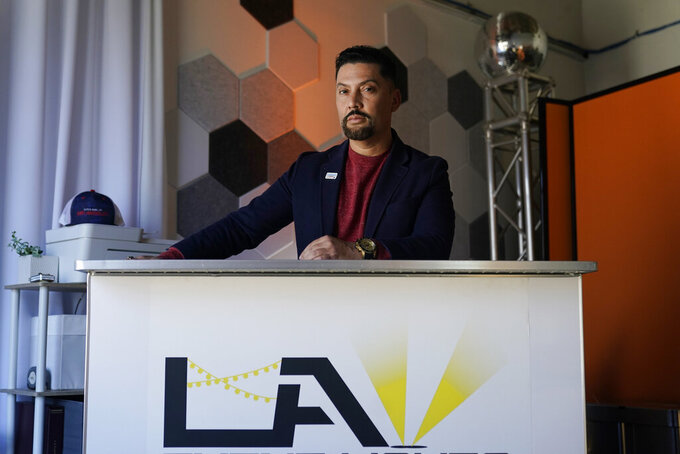 Allan DallaTorre, owner of L.A. Event Lights, poses for a photo in his downtown office Monday, Feb. 7, 2022, in Los Angeles. The Super Bowl's return to the Los Angeles area after a nearly 30-year absence is providing a much-needed boost to small businesses hard hit by the pandemic. Sunday's game and the events surrounding it are projected to generate up to $477 million for the local economy. (AP Photo/Marcio Jose Sanchez)

LOS ANGELES (AP) — The return of the Super Bowl to the L.A. area after a nearly 30-,year absence is already a big victory for local small business owners like Kyndra McCrary.

Her catering company got hired to provide food for performers working the Super Bowl, and for an NFL business networking event last week.

The jobs are a financial shot in the arm for McCrary, whose business is still working its way back to its pre-pandemic normal. Beyond this weekend, McCrary says she's hoping that the Super Bowl work will lead to bigger and better jobs.

“I think there will be a lasting impact because people who will get to try our food will remember us,” said McCrary, 40.

The Super Bowl can inject millions of dollars into a local economy, benefiting businesses beyond those hired to help stage the event.

An analysis paid for by the Los Angeles Sports & Entertainment Commission projected Sunday’s game will generate between $234 million and $477 million for the region’s economy. That includes up to $22 million in tax revenue and between 2,200 to 4,700 new jobs, according to the report by Micronomics, an economic research and consulting firm.

Many of the projected new jobs are expected to be in the event-production and hospitality sectors — areas of the local economy among the hardest hit by the pandemic. More than half are expected to be positions in hotels, restaurants and transportation, among others, the analysis found.

“A lot of the recovery that’s yet to take place is still in service and tourism-related industries,” said Shannon Sedgwick, director of research at the nonprofit Los Angeles County Economic Development. “Having an event like the Super Bowl come to the region and bringing back individuals, with their visitor spending is only going to have a positive economic benefit for the region.”

Hiring has picked up in the months since, as pandemic lockdowns eased. As of December 2021, the county’s unemployment rate was 6.2%.

“We’re moving closer to what we were, but we’re not there yet,” Sedgwick said.

The L.A. area has hosted the Super Bowl seven times, beginning with Super Bowl I in 1967 between the Green Bay Packers and Kansas City Chiefs. Most of the games have been held at the Rose Bowl in Pasadena, including the most recent one, the Dallas Cowboys’ 52-17 rout of the Buffalo Bills in 1993's Super Bowl XXVII. This week’s game between the Cincinnati Bengals and the Los Angeles Rams is taking place in SoFi Stadium, which opened in September 2020 in Inglewood.

Much of the L.A. region’s economy has changed in the decades since it last played Super Bowl host. The area has shifted gradually from a manufacturing-oriented economy to one geared toward providing services, including those that cater to tourism.

Service industries, including health care, retail, transportation and financial activities, account for 89% of L.A. County’s economy, Sedgwick said. Out of that, roughly 11% is made up of leisure and hospitality, the category that includes restaurants and bars.

In the early days of the pandemic, McCrary saw jobs catering on TV and film sets all but disappear as productions shut down. Jobs catering weddings and other big events also vanished, as did the need for many companies to provide meals for their once-packed corporate offices.

Over time, things started to pick up slowly. She estimates her business, in terms of revenue and jobs, is about 40% back to normal.

She has about five employees now, about half as many as she had before the pandemic. But she will have about 14 people working for her during her game-day gig providing meals all day for the “talent” at an NFL tailgate party.

McCrary landed the Super Bowl job through an NFL program called Business Connect. It invites companies with certified minority, woman, veteran, lesbian, gay, bisexual or transgender ownership to apply and potentially get hired to provide their services for the many events surrounding the game.

Some 225 businesses, including 26 in Inglewood, have participated in this year’s program, which offers 18 months of professional development workshops aimed at preparing business owners to apply for Super Bowl jobs, including catering, janitorial services, lighting and security.

The program tries to cap the number of businesses that participate so that a majority of them have a good chance of getting a contract, said B.J. Waymer, an NFL consultant.

Allan DallaTorre’s production event and design firm was one of the local businesses that participated in the program.

Before the pandemic, the 44-year old’s business regularly worked small movie premieres, fundraisers and other events. But much of that dried up after the pandemic hit and, until recently, has been slow to return.

“Just the networking that I’ve had with other vendors, we’ve been able to network and refer each other business,” DallaTorre said. “Every little bit helps us.”