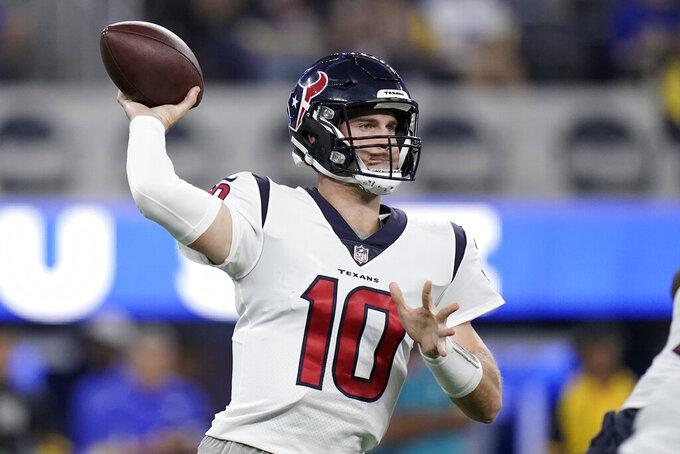 Strengths: Receiver Brandin Cooks is perhaps the team’s best player, and his veteran presence should help Mills take a step forward in Year 2. Cooks led the team with 90 catches for 1,037 yards last season for his second consecutive 1,000-yard season and sixth overall. Houston’s offensive line should also be solid with the return of left tackle Laremy Tunsil, a two-time Pro Bowler who missed the final 12 games last season with a thumb injury that required surgery, and the addition of the versatile Green, the 15th overall pick.

Weaknesses: The Texans did little to improve a run defense that ranked 31st in the NFL last season. And their secondary is a question mark with the team likely to start at least two rookies, who while talented, will need time to adjust to NFL play before improving the group. While Cooks is a solid player, the Texans don’t have a true No. 2 receiver, which could cause defenses to key in on him and limit his production.

Camp Development: Pierce, a fourth-round pick from Florida, was the surprise of camp, impressing almost daily with his hard running style and constant energy. He wowed in the team’s preseason opener when he ran for 49 yards on just five carries. He entered camp as the third-string running back behind Mack and Rex Burkhead, but neither of them has looked great in preseason, bringing speculation that Pierce could become the starter.

Fantasy Player To Watch: Pierce could be a good pick here after averaging 5.5 yards a carry in a four-year career at Florida. If he gets the starting job, he could be a sleeper pick at running back for fantasy teams.

Expectations: Multiple high draft picks and several free agent additions should make the Texans better than they were last season. Smith, the team’s former defensive coordinator, is committed to turning around the defense and believes the additions of Stingley, the third overall pick, and Pitre, a second-round pick, can transform a secondary that was terrible last year. If the rookies improve the defense and Mills takes a step forward in Year 2, Houston could win a few more games than last season, but it’s unlikely that this young team will be good enough to contend for the playoffs.

By Mark Anderson And Brett Martel 15 minutes ago
By Teresa M. Walker an hour ago
By John Marshall 2 hrs ago
By Greg Beacham 2 hrs ago
By Tom Withers 2 hrs ago