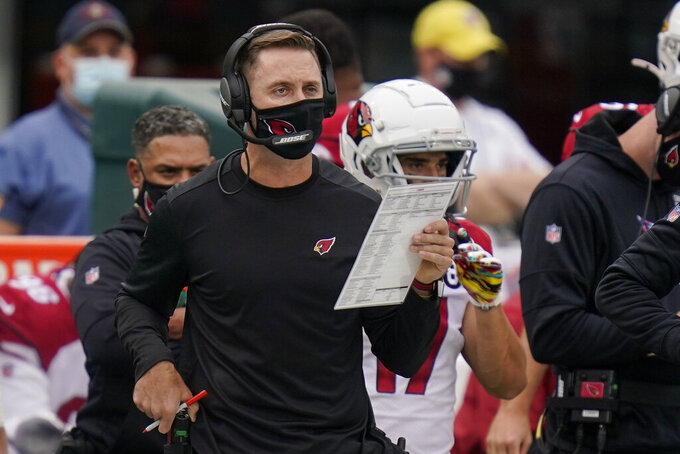 TEMPE, Ariz. (AP) — Arizona Cardinals coach Kliff Kingsbury is headed back to his home state of Texas on Monday for a pretty big football game. He's unsure if his southern drawl will make a return appearance as well.

“It’s usually after a few Coors Lights so I don’t know if it’ll really break out this trip,” Kingsbury said with a wry grin.

The Cardinals travel to face the Dallas Cowboys for “Monday Night Football” in a game that isn't short on storylines. Arizona (3-2) is one of the NFL's up-and-coming teams and trying to stay competitive in the tough NFC West.

The Cowboys (2-3) are trying to regain their footing with backup quarterback Andy Dalton, who's making his first start in place of the injured star Dak Prescott.

It'll also be a showcase for some of the premier talent that the Texas football scene has produced over the years. Kingsbury and second-year Cardinals quarterback Kyler Murray will both be making their first NFL appearances in their home state.

The 41-year-old Kingsbury was a standout prep player in the late 1990s at a high school just north of San Antonio and later played and coached at Texas Tech. He was also the offensive coordinator at Texas A&M. The 23-year-old Murray was a phenom in the Dallas suburbs, winning three high school titles before a college career at Texas A&M and Oklahoma.

The two have bonded over their Texas background and speak highly of the state's football scene, even if their playing careers were nearly two decades apart. Both say it's a thrill to go back home despite COVID-19 restrictions that mean the crowd won't be nearly as full or raucous as usual.

“He’s probably more anxious than me,” Murray said of Kingsbury, before poking fun at his age. “I’ve never actually seen his film or his high school tape. I heard it was on the news last night. I heard it was real grainy, real old clips.”

Murray has quickly matured into a productive NFL quarterback less than two years after being selected with the No. 1 overall pick in the 2019 draft. He's thrived in big moments throughout his career and certainly has good memories at AT&T Stadium, where he has a 6-0 record as a starter, including three high school state championships and a Big 12 championship.

Monday will be another big moment. Growing up in football-crazy Texas, he's used to them.

“Ever since I was a kid, peewee, whole field surrounded whenever we played games and stuff like that," Murray said. “So it was something I was used to, something that I always wanted to be a part of, to be that guy on the field and have everybody watching our team.”

One reason Kingsbury was so excited to draft Murray in 2019 was the knowledge of his Texas background and how he thrived in pressure-packed environments. The coach said Murray was already drawing rave reviews by his freshman year of high school and lived up to the hype, especially during big moments at AT&T Stadium.

“He obviously likes that stadium and has had a lot of success there,” Kingsbury said. "This is what he’s worked hard for his entire life, to have moments like this, and I know he’s excited to go out there and try to put his best foot forward.”

The Cowboys have plenty of Texas-grown talent as well. Dalton — who started for Cincinnati for nine seasons before coming to Dallas — is a Houston-area native who played in college a few miles from AT&T Stadium at TCU.

Kingsbury doesn't expect the Dallas offense to be any less difficult to stop with Dalton under center.

“A Pro Bowl-caliber player, we faced him last year when he was at Cincinnati, he had a heck of a game and he’s got great weapons,” Kingsbury said. “He’s been a tremendous player in this league for a long time and it’s going to be a huge challenge trying to slow that offense down.”

It'll also be the "MNF" debut for Cowboys rookie receiver CeeDee Lamb, who played high school football in Richmond, Texas, before teaming with Murray at Oklahoma.

Lamb’s caught 29 passes for 433 yards and two touchdowns in his first five NFL games. Murray called Lamb “a natural” and isn't surprised he's having so much success early in his career.

“We had a lot of success together, a lot of great times,” Murray said. "That’s my boy on and off the field. Wish him nothing but the best, but this weekend he’s on the other side.”

Lamb said the feeling is mutual.

“I mean, that’s my brother at the end of the day,” Lamb said. “We went to college together. Had great memories and we’re living out our dream that we’re going through now. Somebody’s got to come out with an ‘L.’ I’m not planning on it being us.”