These players won (and lost) sports bettors the most in 2021 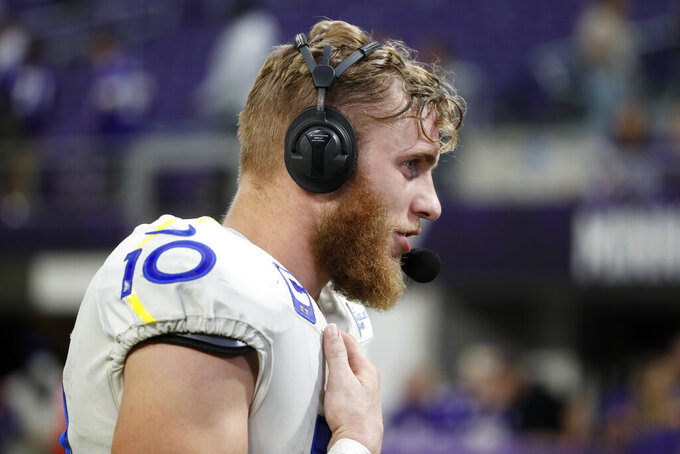 FILE - Los Angeles Rams wide receiver Cooper Kupp (10) is interviewed after an NFL football game against the Minnesota Vikings, Sunday, Dec. 26, 2021, in Minneapolis. Kupp was among the athletes who either won or lost the most money for sports bettors in 2021, according to several national sports books. (AP Photo/Bruce Kluckhohn, File)

ATLANTIC CITY, N.J. (AP) — Colts running back Jonathan Taylor, Buccaneers receiver Mike Evans and Rams wideout Cooper Kupp have not only been money on the football field this year, they've made lots of money for people who bet on them.

Los Angeles Angels pitcher/slugger Shohei Ohtani not only regularly went deep on the diamond, he also went deep into the pockets of sportsbooks.

And mixed martial artist Rose Namajunas had a smashing year, as did those who wagered on her; those who backed her MMA rival, Weili Zhang, took a beating.

They were among the highlights of year-end figures reported this week by several large national sportsbooks.

“Jonathan Taylor, every week he's being bet on to score a touchdown, and almost every week he does,” said Johnny Avello, DraftKing's head of sportsbook. “His odds are the lowest of any guy I've seen in a long time, and players are piling on him.”

Taylor scored a touchdown in 11 straight weeks before being kept out of the end zone on Christmas Day against Arizona.

Rankings of individual players mainly involved how they performed on so-called proposition bets on whether they would reach or fall short of a specified performance level.

Evans won customers the most money this year on DraftKings, followed by Bills receiver Stefon Diggs, Packers receiver Davante Adams, Taylor and Tampa Bay running back Leonard Fournette. DraftKings, like other sportsbooks, did not release the total dollar amounts won or lost by players.

Kelce lost customers the most on DraftKings, followed by Elliott and Jackson, Chiefs receiver Tyreek Hill and oft-injured Panthers running back Christian McCaffrey.

“The Chiefs didn't have a very good start to the season, and Kelce wasn't doing his part, and then when the Chiefs got rolling, they were using other weapons than him,” Avello said. “He was their go-to guy; now they've found other guys to go to.”

Teams that lost customers the most money on DraftKings included the Los Angeles Lakers, Seattle Seahawks, Buffalo Bills and Clemson in college football.

Other sportsbooks did not rank individual players but kept track of games or events on which lots of money was bet. Not surprisingly, the Super Bowl was the most-bet game for most books; another big one was the Buccaneers-Patriots game in October, when Brady's Bucs edged coach Bill Belichick's Pats in their first meeting since Brady left New England.

Caesars listed the Oct. 3 Bills-Titans game, the Dec. 13 Rams-Cardinals NFC West showdown and the Sept. 27 NFC East duel between the Eagles and Cowboys among its most heavily bet games.

Its most heavily bet teams in 2021 so far are the Buccaneers, Chiefs, Packers, Los Angeles Dodgers and Rams.

Week 6 of the NFL season was a bonanza for BetMGM customers, who raked it in on the Cowboys-Patriots, Chiefs-Washington, Rams-Giants and Packers-Bears games, and the following week, they did even better wagering on the Colts-49ers game that Indianapolis won by 12 points.

BetMGM's most bet on college football game was the SEC championship between Alabama and Georgia on Dec. 4, followed by the Michigan-Ohio State rivalry game on Nov. 27 and Alabama's national championship victory over Ohio State last January.

WynnBET listed two college basketball games — Baylor and UCLA at Gonzaga — among games that its customers won the most money on. The Sept. 18 Alabama-Florida football game also made the list, which was led by an NFL game, Vikings-Cardinals, the next day.

FanDuel did not provide similar statistics.