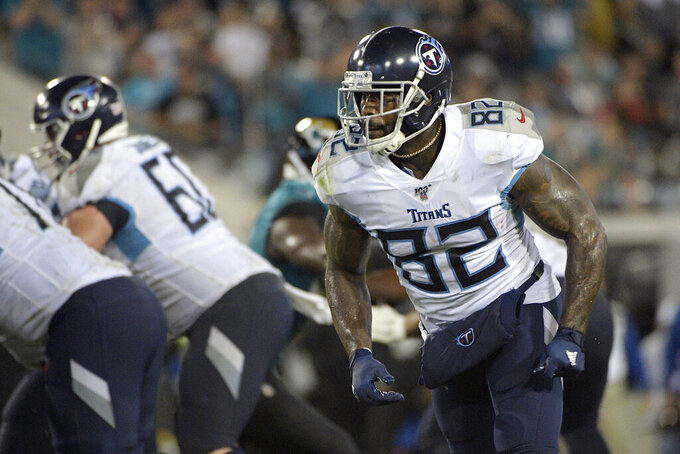 FILE - In this Sept. 19, 2019, file photo, Tennessee Titans tight end Delanie Walker (82) runs a play during the second half of an NFL football game against the Jacksonville Jaguars in Jacksonville, Fla. The Titans have placed the three-time Pro Bowl tight end on injured reserve for a second straight season, the team announced Wednesday, Nov. 27, 2019. (AP Photo/Phelan Ebenhack, File)

Walker had missed the past four games and played only five snaps Oct. 20 in a win over the Chargers after aggravating the right ankle he broke in the 2018 season opener. That injury cost him the season. Walker told reporters last week that a key to his return would be how his ankle handled practice.

The tight end had 21 catches for 215 yards and two touchdowns in seven games.

The Titans filled Walker’s roster spot by signing Ryan Santoso. The 6-foot-5, 258-pound kicker played college football at Minnesota and was an undrafted free agent in 2018 with Detroit. He spent the offseason and preseason with the Lions and was 3 of 4 on field goals this preseason.