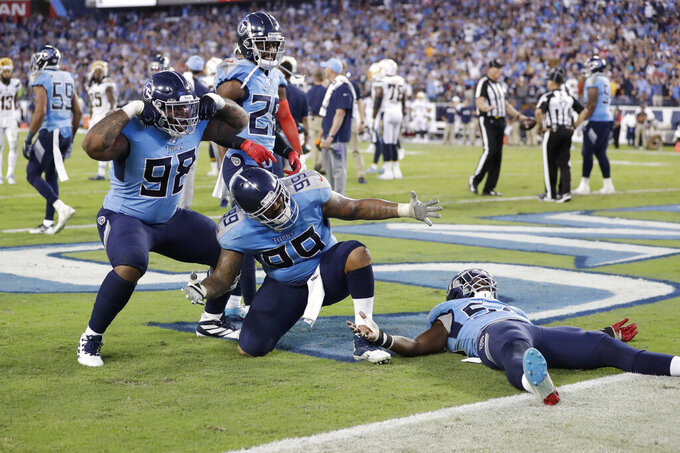 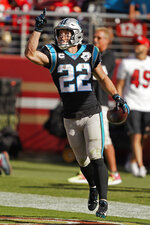 Now the former UCLA linebacker gets his first chance to tackle the former Stanford running back in the NFL. Brown said it will be a fun challenge Sunday when the Titans (4-4) visit Carolina (4-3).

Brown and the Titans are pretty confident they can contain the man with the NFL's No. 4 scoring defense. They're also rank 12th in the league giving up 96.5 yards rushing a game and ninth in yards allowed (335.6).

He had 155 yards from scrimmage last week in a 51-13 loss to San Francisco. He's been held below 93 yards rushing only twice this season — both by Tampa Bay.

Titans safety Kevin Byard said McCaffrey is one of the NFL's more elite players and able to attack from anywhere.

"We're definitely going to have to be great tacklers with him, understanding we have to get all 11 to the ball making sure we're wrapping up, swarming this guy because this guy can take it to the house anytime he touches the ball," Byard said.

Looking at McCaffrey on tape has been both agonizing and fun for Titans coach Mike Vrabel, a former linebacker. Vrabel said coaches know McCaffrey will be productive whether he's running or catching passes.

"He'll be patient, and then he's got a burst to hit the hole," Vrabel said. "If you over pursue, he cuts back. If you come in there light on the sidelines, he's going to stiff arm you. He's got a lot of tools, and he uses them very effectively."

Panthers coach Ron Rivera says McCaffrey simply picked up where he left off last season, and Carolina's biggest challenge is not overworking him while not wanting to take the ball out of his hands.

Notes: The Titans brought back center Hroniss Grasu on Thursday morning with center Ben Jones in the concussion protocol. Jones missed a second straight practice Thursday. LG Rodger Saffold also is in the concussion protocol but practiced fully. CBs Malcolm Butler (hamstring) and Adoree' Jackson (foot) practiced fully after being limited Wednesday. Brown was added to the injury report Thursday after being limited by a groin injury that kept him out of most of two games before he returned last week.