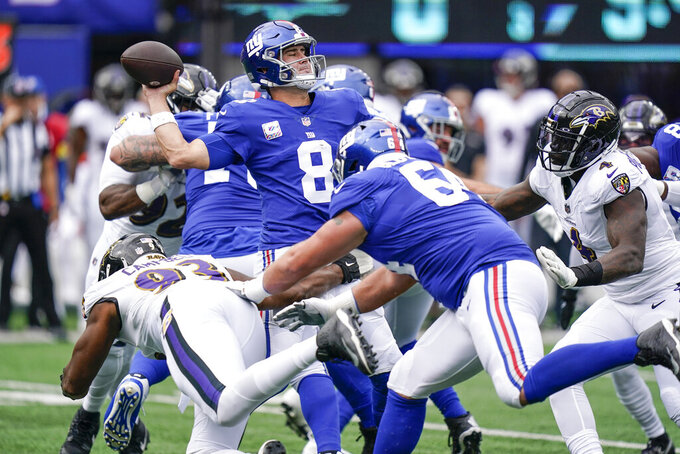 It's pretty effective too.

The Ravens sacked Cleveland's Jacoby Brissett five times in a 23-20 victory Sunday. Two of those sacks were from the 33-year-old Houston, boosting his career total to 106. The 36-year-old Campbell also had one and forced a key fumble on the play.

“If you can put pressure on the quarterback and make the quarterback uncomfortable, that creates a lot of turnovers,” Houston said. "It helps the game. It changes the game. So, any time you can get turnovers and change the momentum of the game, that’s big.”

After signing Pierre-Paul last month, the Ravens are one of two teams to have three defenders on their active roster with at least 90 career sacks. The other was the 1994 Green Bay Packers with Reggie White, Steve McMichael and Sean Jones.

Baltimore ranks sixth in the league with 20 sacks on the season. The Ravens are also tied for first with 14 takeaways. All of that has helped Baltimore's defense recover after allowing 28 fourth-quarter points in a loss to Miami in Week 2.

This is the Ravens' first season under new defensive coordinator Mike Macdonald, and after a rough start — particularly in the secondary — the defense seems to be moving in the right direction. Houston already has four sacks, just a half-sack shy of the linebacker's total from all of last season. And he's done it despite missing three straight games before Sunday with a groin injury.

“Justin Houston came up big for us today," Campbell said after the win over Cleveland. "I thought he was the best player on the field when he was out there.”

Campbell has three sacks, already doubling his total from last season. The 33-year-old Pierre-Paul has a sack as well since joining the team. When Campbell forced Brissett to fumble in the third quarter Sunday, the Ravens recovered at the Cleveland 25 and scored a touchdown soon thereafter.

“I think we’re just building and growing in the right direction. I always knew what we had in the locker room. It was just a matter of time,” Houston said.

“We’re still growing, we’re still learning how each other works. JPP is new. We’re figuring out how he likes to rush. It’s more than just a one-man show up front. Everybody has got to be on the same page, and the communication has to be big when you’re rushing up front.”

Now the Ravens head to Tampa Bay for a Thursday night matchup against Tom Brady, who for all of his struggles this season has only been sacked 10 times. It's an opportunity that Odafe Oweh, Baltimore's second-year linebacker, relishes.

“Last year he retired, and I was like, ‘Oh, I just missed him.’ He came back, so I guess it’s fate,” Oweh said. "It’s going to be good. I’m playing against the GOAT, and that brings me jitters, so I hope I’ll have the opportunity to get after him.”