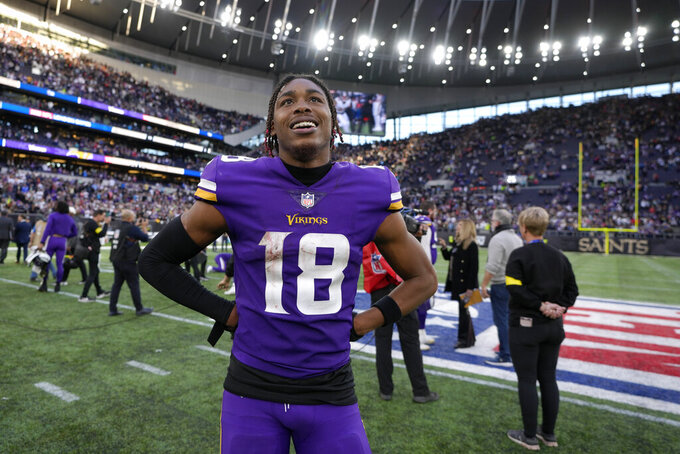 MINNEAPOLIS (AP) — The upside for the Minnesota Vikings is clear: They've finished the first quarter of their first season under new head coach Kevin O'Connell by managing to build a firm foundation with a 3-1 record.

Chemistry and confidence can go a long way toward winning — O’Connell described it as “different types of resiliency” — but there's no hiding that an experienced and talented offense he was hired to direct has left a whole lot of points on the field.

After escaping London with a 28-25 victory over New Orleans on Sunday that was aided by the luckiest of bounces, the Vikings found themselves ranked 26th in the NFL in red zone scoring. They've turned just seven of their 15 trips inside the 20-yard line into touchdowns for a 46.7% rate.

The sample size remains relatively small. Still, no team with Justin Jefferson, Adam Thielen and Dalvin Cook as the primary scoring threats should be settling for that many field goals.

“We definitely have to get in the end zone way more, just executing our plays,” Jefferson said.

Quarterback Kirk Cousins zeroed in on the third-quarter drive that was given a major boost when the Saints fumbled a punt return following the only three-and-out of the game for the Vikings.

Cousins hit Jefferson for 41 yards on the first play to the 3. But then came a delay of game penalty, which Cousins took the blame for.

Cook gained 1 yard on the backed-up first down. Jefferson wasn't able to secure a second down throw into the back of the end zone that was behind him. Then Cousins dumped one off to Thielen for 1 yard on third down after missing a wide-open Jefferson. Greg Joseph followed with his third of five field goals in the game.

“The plays are there to make, and we didn’t connect,” Cousins said. “That’s disappointing.”

Cousins recognized the squandered opportunities afterward and said he “could be greedy” in the future by not settling for the perceived safer throw.

O'Connell awarded Jefferson a game ball, not only for the 10 receptions for 147 yards and 3-yard touchdown run, but for the way he worked through the frustration of a muted impact amid frequent double teams over the previous two games.

“I’m not being a virus to the team,” Jefferson said. “If somebody’s double-teaming me, I can’t really do too much about that. That just shows you how much effect I have on the defensive side, just being a key player, just having them know where I’m at at all times.”

The defense is tied for sixth best in the league with just 3.3 points allowed per game in the final four minutes of either half or overtime. Last season, the Vikings were the worst in the NFL in those situations with an average of 9.5 points allowed.

“Across the league you have people who are kind of figuring out their rosters and their team, their identities, including us,” linebacker Eric Kendricks said. “It’s good to know that when our back is against the wall, when it’s a tight game like this, we’re on the road in London, we can pull through."

Despite the healthy return of Danielle Hunter and the addition of Za'Darius Smith, the Vikings haven't generated a consistent pass rush.

They're just 17th in the league in sacks per pass attempt after ranking fourth last year.

Third-year cornerback Cameron Dantzler Sr. had three pass breakups and one tackle for loss. His diving knockdown of a deep pass to Chris Olave on second down with 2:01 left was a game-saving play, forcing the Saints to settle for the tying field goal two snaps later.

“Cam had probably one of his better games since we’ve been playing together this year,” cornerback Patrick Peterson said. “I’m just excited to see him continue to grow into a pro.”

Tight end Johnny Mundt has been starting ahead of Irv Smith Jr. and played a comparable amount of snaps (136 for Smith, 116 for Mundt), but he dropped a key pass on Sunday on third-and-1 at the 10 in the second quarter. Mundt and Smith are tied for the eighth-most drops in the league with two apiece, according to Sportradar data.

Rookie safety Lewis Cine, who suffered a compound fracture in his lower left leg on a special teams play, underwent a preparatory procedure in a local hospital after the game on Sunday and will have surgery on Tuesday. He'll stay in London for the initial part of his recovery with a member of the team's medical staff. O'Connell said Cine was in “great spirits.”

Cook played with a harness on his left shoulder, and Thielen left the game briefly with an injury to his right leg. Za’Darius Smith was limited to 24 of the 60 snaps for the defense after being listed as questionable with a left knee injury. He had one of Minnesota's two sacks.

30.5 — The average starting field position for the Vikings, which is the fourth best in the league. They're 15th in scoring.

The Vikings host Chicago this Sunday, with a prime opportunity to crank up their pass rush. Bears quarterback Justin Fields is 5 for 20 with two interceptions and 16 sacks when facing pressure this season, according to Sportradar.