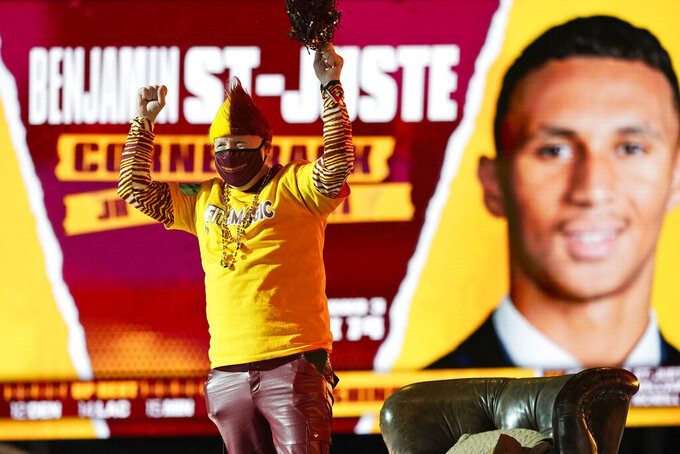 Washington may have found its long-term answer at left tackle in the second round and unearthed another third-round receiving gem.

Washington used the 51st pick in the NFL draft Friday night on Texas offensive tackle Sam Cosmi, who could fill the void left by former starter Trent Williams. With the 82nd pick, it took North Carolina wide receiver Dyami Brown, who has already drawn comparisons to 2019 third-rounder Terry McLaurin — one of the steals of that draft.

In between, Washington used the 74th pick on Canada-born Minnesota defensive back Benjamin St-Juste, who has the versatility to play cornerback or safety, a quality coach Ron Rivera values when choosing between prospects.

“I do like the potential of all the guys,” Rivera said. “I think Sam and Benjamin and Dyami are all guys that can come in and contribute early in their careers.”

Cosmi started the first eight games in 2020 before opting out of the remainder of the season to avoid injury. He was the seventh offensive lineman and fourth offensive tackle taken in the second round.

“My girlfriend and my parents, they were telling me, ‘You’re coming soon, you’re coming soon,’” Cosmi said during a conference call with reporters. “Going forward, I’ll definitely have a mental note in the back of my head of the guys that went ahead of me."

Washington is less concerned about the seven offensive tackles drafted before Cosmi and more focused on the hope he can follow Williams as a mainstay anchoring the offensive line for years to come. With All-Pro right guard Brandon Scherff set to play a second consecutive season on the franchise tag, there are plenty of questions for that unit, and Cosmi could provide at least one answer.

After Williams held out the 2019 season amid a dispute with the previous regime, Washington traded him to San Francisco at last year's draft and attempted to draft his successor in LSU's Saahdiq Charles. Injuries limited the fourth-round pick to one game — a start at left guard — during his rookie season, with veteran Cornelius Lucas getting the majority of the work at left tackle.

The 6-foot-6, 313-pound Cosmi could change that. He earned second-team all-Big 12 honors while starting all 13 games at left tackle for Texas in 2019 and even had a touchdown catch against West Virginia.

“We're going to put him out at left tackle and see how he does," Rivera said. “He played it really well in college. ... He’s going to get an opportunity to compete, and we’ll see how it goes.”

Washington used the 19th pick in the first round Thursday night on Kentucky's Jamin Davis, who Rivera believes can play all three linebacker positions.

St-Juste, a Montreal native, transferred from Michigan in 2019 played two more seasons at Minnesota. He joins a revamped secondary that includes free agent signing William Jackson and could be considered at safety.

“He does have a skillset, and he also has a body type, that lends itself to having some position flex,” Rivera said.

Brown was an all-ACC selection last season for leading North Carolina with 55 catches, 1,099 yards and eight touchdowns. Washington would love to see Brown turn out as well as McLaurin, who has 145 catches for 2,037 yards and 11 TDs in two pro seasons.

“Working with the guy I’ve been compared to, I can’t wait to see what happens,” Brown said.

Tight end and depth running back are among Washington's remaining needs, along with safety if St-Juste sticks at cornerback. The team has one fourth-, one fifth- and two seventh-round picks Saturday.

It's unclear if Washington will use one of them on a long-term developmental quarterback after passing on trading up for one of the draft's top prospects. General manager Martin Mayhew said the organization feels good about the QBs currently on the roster: free agent addition Ryan Fitzpatrick, Rivera favorite Kyle Allen, playoff-game starter Taylor Heinicke and 2020 undrafted free agent Steven Montez.

“We’re in play for everything,” Mayhew said. “We’re going to look at everything from a holistic level and make the best pick at every opportunity.”