Years after coming out, gay athletes upset by lack of change 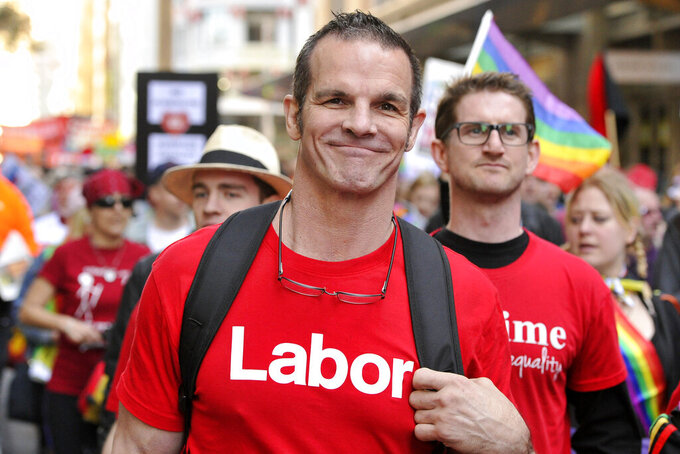 BRISBANE, Australia (AP) — David Kopay and Ian Roberts live on different sides of the Pacific Ocean. Both took giant leaps of faith when they came out.

And at a time when it had never been done in their sports.

Kopay is a 78-year-old former National Football League running back living in Palm Springs, California and known as the first professional athlete to reveal he was gay. He came out in 1975 after his NFL career ended.

In 1995, Roberts became the first high-profile Australian sports person and first professional rugby player in the world to come out as gay.

Some 45 years after Kopay's open disclosure, and 25 after Roberts', both men are united in their disappointment that a higher proportion of gay athletes haven’t come out, and that homophobic language on the sporting fields is still rife.

“It’s ignorance more than anything else, they try to hide their own insecurities by putting down other people,” Kopay told The Associated Press in a telephone interview, speaking of homophobic slurs. The call interrupted his rearranging in a new apartment of photos and other memorabilia from an eight-year NFL career that spanned five teams beginning with the San Francisco 49ers in 1964.

“It’s horrible to hear that kids are being targeted. I’ve sacrificed so much to try and change this problem,” Kopay added. “I know most people don’t mean anything when they use these horrible words, but . . . you have no idea what people are thinking.”

Roberts, who has forged an acting career since retiring, played for two more rugby league seasons after coming out. A powerful front-row forward who played for the national team, Roberts wishes he had done it sooner.

“It was the worst-kept secret. Everyone knew I was gay. I wish I had come out from Day One," the 55-year-old Roberts told the AP in a telephone interview from a movie set near Sydney where he’s working in the third season of the “Mr. Inbetween" series. “Personally, it was kind of empowering when you come out, there were some wonderful stories as well, people came to me and said how happy they were with me."

Kopay’s comments about homophobic language and Roberts’ about coming out as gay are at the forefront of two studies published Wednesday by Melbourne’s Monash University.

The first analyzed survey responses from 1,173 lesbian, gay, and bisexual people aged 15 to 21 and living in the United States, Britain, Canada, Australia, New Zealand or Ireland. Authors described it as the first study to investigate whether LGB youth who “come out” to teammates are more likely to be a target of homophobic behavior than those who do not.

“Some gay athletes who have come out as adults have said fears that LGB young people will be the target of homophobic behaviors if they come out to their teammates are unfounded,” said lead author Erik Denison from Monash’s Behavioural Sciences Research Laboratory. “We hoped this was true given young people generally have positive attitudes toward gay people.

“Being the target of homophobic behavior is harmful to the health of LGB young people and increases their risk of depression, suicide, and self-harm.”

The study also showed that young people who came out were significantly more likely to report they'd been the target of homophobic behaviors in sport settings.

The second Monash study investigated why some athletes use homophobic language.

“Sports organizations, LGBTQ advocacy groups, and government officials typically assume homophobic behavior is driven by homophobic attitudes in sports,” Denison said. “Over the last two decades, dozens of educational resources, advertising campaigns, and initiatives such as Pride Games have been developed to end homophobia in sports. These approaches do not seem to be working because studies consistently find homophobic language continues to be frequently used by male athletes.”

A sports inclusion website updated to coincide with the release of the two studies was created, it says, to “illustrate the lack of meaningful action on homophobia and transphobia in sport."

It includes a timeline of other famous sports people who came out, including Billie Jean King and Martina Navratilova in 1981, and English soccer player Justin Fashanu in 1990. Fashanu retired in 1997 and committed suicide in 1998 at the age of 37.

Roberts said he heard homophobic remarks on the field but he was heartened when, after he'd announced he was gay, the North Queensland Cowboys made him captain.

“The Cowboys, they were fantastic,” Roberts said of the Townsville-based National Rugby League club. “Yes, they had a gay captain. Yes, there were naysayers, but they would have have been in a minority.”

Back across the Pacific Ocean and to Kopay in his new apartment, where the former NFL player says he “thought coming out would make it easier for other athletes to be open about their sexuality . . . I hoped to make a difference so others in my position would have the freedom to be who they are.

“But it was such a painful experience, it was horrible,” Kopay added in a separate interview with Monash University. “I sacrificed so much . . . I couldn’t get a job, couldn’t get a coaching position, no one wanted to hire me. It was like I committed murder.”

Roberts said reasons like those are behind many players not wanting to come out until they are finished their careers.

“That is a shame,” Roberts said. “I have heard along the gay grapevine, that still happens . . . waiting until they retire because of their fears.”

“I have often been asked if I thought that more gay athletes would come out in sport, and I have always said it was just a matter of time,” Kopay says. “I could never have imagined that nearly 50 years later we would still have no openly gay athletes in America’s Big 4 sports (baseball, football, basketball and hockey). We also don’t have many around the world.

“We now have gay marriage but we don’t have any openly gay athletes in the NFL. It makes no sense.”