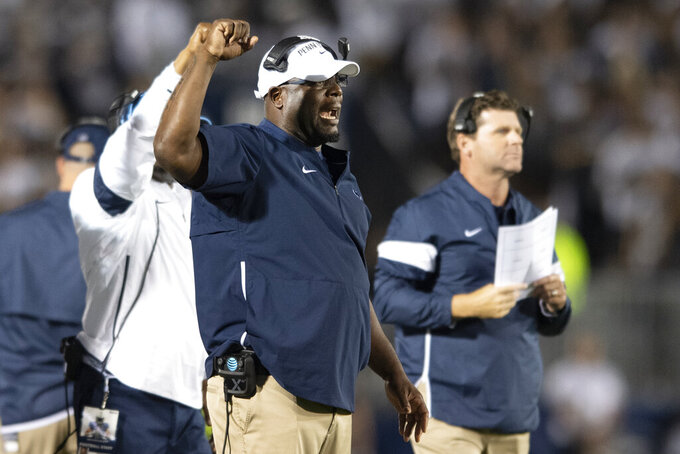 FILE - In this Sept. 7, 2019, file photo, then-Penn State defensive line coach Sean Spencer talks with his players in the second quarter of an NCAA college football game against Buffalo in State College, Pa. After spending more than two decades in the college ranks as an assistant coach, Sean Spencer is bringing his high-energy approach to the New York Giants. Spencer has a big personality and the Giants defensive linemen are learning it first hand. (AP Photo/Barry Reeger, File)

After spending more than two decades in the college ranks as an assistant coach, Sean Spencer is bringing his high-energy approach to the New York Giants.

Spencer has a big personality and the Giants defensive linemen are learning it first-hand. What would you expect from someone nicknamed “Coach Chaos?”

One of the things the 49-year-old Spencer does is run on the field after a passing play is over and chases his linemen to the quarterback. It's just a way of showing the guys they need to finish plays.

He's like that at every practice. It's his nature.

“I can’t change. I can’t change,” Spencer said on a conference call Thursday. “I’m coming hard every day. So, those guys know about my energy and they’ve got to experience it a little bit. I told them today, this that wasn’t a one-time thing yesterday. That it’s going to be like that every day.”

Spencer, who spent the past six years at Penn State working with the defensive linemen, insists he has not had a good day or done a good job unless he leaves the field sweaty.

Spencer is taking over a group that has talent. Defensive tackle Dalvin Tomlinson has gotten better in each of his first three seasons. Fellow tackle Dexter Lawrence was impressive as a rookie and end/tackle Leonard Williams was made a franchise player after being acquired midway through last season from the Jets.

Those are the anticipated starters in the 3-4 scheme. They all have potential.

“I just told them I’m here to help them reach their potential,” Spencer said. “Beyond that, I don’t care if you’re a hot or high draft pick or you are a free agent or whatever. I’m here to help you reach your potential. And that’s why coach brought me in.”

Spencer's units have been outstanding. Penn State had 45 sacks last season, the seventh-best in the country. It was the Nittany Lions' fifth consecutive season with at last 40 sacks.

This isn't Spencer first shot to move to the NFL.

About three years ago, another NFL team Spencer did not identify approached him about moving to the pros. It didn’t work out. He never hesitated when the Giants called about a spot on Joe Judge’s staff.

Spencer was old friends with defensive coordinator Pat Graham and the Hartford, Connecticut native liked the idea of returning to the Northeast. He also liked the thought of working with Judge, the young New England Patriots special teams coordinator.

The key now is getting his linemen to produce.

In some ways, Spencer hopes to rub off on his players, who include rookie defensive end Cam Brown, a player he coached at Penn State.

He was really excited on Wednesday when the Giants stepped on the field for the first time with all 80 players there. It was the start of Phase II.

When he met with his group on Thursday, he had a reminder for them.

“I wanted them to understand that this was not something that I’m just going to do on occasion,” he said. “This is how they are going to be coached. That it wasn't going to be a day off. I want them to match my energy every day.”

A three-year starter at safety for Clarion University in Pennsylvania, Spencer has been working with defensive lineman almost his entire career. He spent his first five years coaching running backs and wide receivers before gravitating to the defensive line.

He didn't talk about his approach then, but he was probably racing them to the end zone after every play.