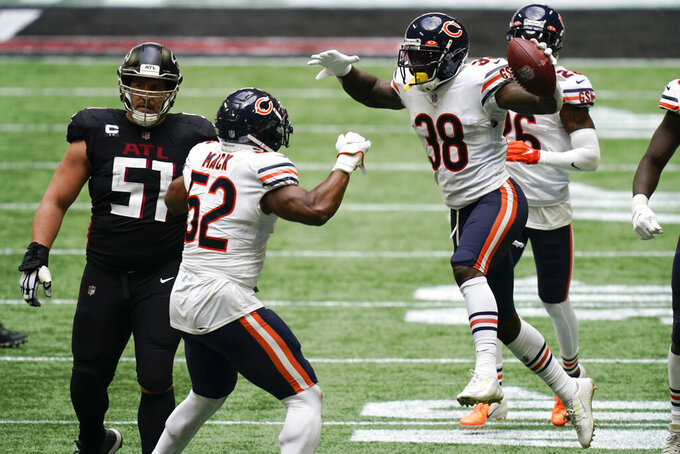 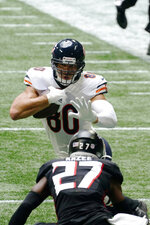 ATLANTA (AP) — No matter how bad things might have seemed a week ago, the Atlanta Falcons somehow managed to make it even worse.

This one could spell the end for embattled coach Dan Quinn, who already carried the burden of the biggest squandered lead in Super Bowl history.

The Falcons surrendered a 16-point advantage in the final 6 1/2 minutes to the Chicago Bears, who got three touchdown passes from backup quarterback Nick Foles and pulled out a 30-26 win on Sunday.

It would have seemed downright improbable — if it hadn't happened for the second week in a row.

Atlanta (0-3) became the first team in NFL history to lose back-to-back games in which it led by 15 or more points in the final period, according to STATS.

“These last two weeks have been nothing short of crushing,” said Quinn, the sixth-year coach who desperately needed a strong start to the season after two straight losing campaigns.

A week ago, Atlanta became a national laughingstock after failing to pounce on an onside kick, allowing the Dallas Cowboys to finish off their comeback from a 39-24 deficit to win 40-39 on a field goal as time expired.

“It doesn’t get no worse than this," defensive end Dante Fowler Jr. said. “We probably found the two worst ways you can lose a football game.”

Under Quinn, the Falcons also wasted a 28-3 lead in the Super Bowl after the 2016 season and lost in overtime to the New England Patriots.

Quinn faced questions about his job security after the latest debacle. He insisted that he's only focused on turning things around.

“I need to be the same guy on our best days and on our worst days,” Quinn said. “Anything past that does not help the team. All I can focus on is us finishing better. That's where my focus needs to be.”

This time, it was Foles who guided the improbable comeback after relieving erratic Mitchell Trubisky in the third quarter, pushing the Bears to 3-0 for the first time since 2013.

The former Super Bowl MVP won it with a 28-yard touchdown pass to Anthony Miller with 1:53 remaining.

“Pretty special,” said tight end Jimmy Graham, who had a pair of touchdown catches. “He was out there ad-libbing a bit for sure and checking and changing some plays. There’s one play he called, I’m like, ‘We got that?’ So it was pretty cool to see and pretty cool to be a part of.”

Foles had two apparent touchdown passes overturned by official reviews — and still managed to pull out the victory.

He tossed a 3-yard touchdown pass to Graham to make it 26-16 with 6:20 to go. The Falcons still appeared in good shape after the Bears failed on a 2-point attempt.

But Chicago got the ball back and moved quickly down the field. Foles connected with Allen Robinson on a short pass that turned into a 37-yard touchdown when Isaiah Oliver and Blidi Wreh-Wilson both missed tackles, allowing the receiver to scoot down the sideline.

After the Falcons went three-and-out on their third straight possession, Foles heaved one down the middle of the field with a rusher in his face. Miller hauled it in for the winning score.

The Falcons still had a shot, but Matt Ryan's pass was intercepted by Tashaun Gipson to seal it.

Brian Hill and Todd Gurley each ran for a touchdown and Ryan connected with Hayden Hurst on a short TD pass that helped stake the Falcons to their seemingly comfortable lead.

Of course, no lead is safe for the Falcons.

Especially with Foles recapturing some of the magic he had in guiding the Philadelphia Eagles to the Super Bowl title three seasons ago after replacing the injured Carson Wentz.

Foles spent one injury-plagued season in Jacksonville, then was acquired by the Bears to put some heat on the disappointing Trubisky.

Trubisky set up Chicago's first touchdown with the second-longest run of his career, a 45-yarder after the Falcons abandoned the the entire middle of the field. He connected on Graham on a 2-yard scoring pass to pull the Bears within 16-10 at halftime.

But Foles got his chance after Trubisky threw an interception in the third quarter that led to a Falcons field goal, pushing the lead to 26-10.

“It kind of happened out of nowhere,” Trubisky said. “I just accepted the news. I had Nick’s back like he’s had mine. The situation sucked, but it was just the flow of the game and how it happened and coach made the decision that he felt was best for the team.”

Foles pushed the Bears down the field on his first possession, connecting with Robinson on a play that was initially ruled a 21-yard touchdown pass even though Darqueze Dennard came away with the ball. After reviewing the replay, the officials ruled that Robinson never had control and awarded an interception to Dennard.

With just under 11 minutes remaining, Foles delivered another apparent touchdown on fourth down, connecting over the middle to Miller on a 17-yard throw. But a replay showed the receiver trapped the ball against the turf, turning the ball over to the Falcons on downs.

Turns out, Foles was just getting warmed up.

Bears: RB Tarik Cohen left the game in the second half with a knee injury. S Sherrick McManis was knocked out by an ailing hamstring.

Bears: Return home to face the Indianapolis Colts next Sunday.

Falcons: Head to Lambeau Field to take on the Green Bay Packers in a Monday night game to finish off Week 4.