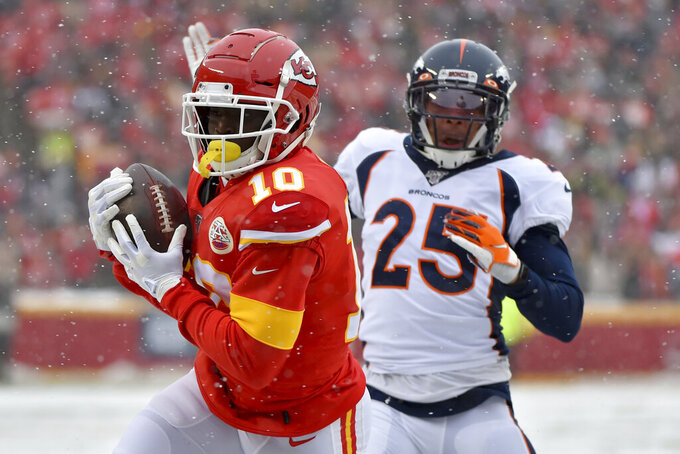 ENGLEWOOD, Colo. (AP) — The always confident Chris Harris Jr. has been down on his recent play.

The Denver Broncos cornerback doesn't feel all that worthy of a spot during a season where he's constantly shadowed the opposition's top receiver all over the field. He definitely thinks there are more deserving defensive backs, including New England's Stephon Gilmore.

That's not an easy admission for Harris, a four-time Pro Bowler filled with swagger.

"They did their thing," Harris said Tuesday.

One quick addendum from Harris: No defensive back had harder assignments week in and out than him.

"I don't think they've faced the schedule we've faced," said Harris, whose team's loss Sunday in Kansas City guaranteed a third consecutive losing season for the Broncos (5-9) and pushed their playoff dry spell to four years. "Other than that, all those other guys are worthy for sure."

Harris has just one interception this season — against Tennessee on Oct. 13. He needs one more for his eighth straight season with multiple picks, which would tie the team mark held by Mike Harden (1981-88).

Maybe it's the pressure of a contract year. Maybe it's not having fellow cornerback Bryce Callahan, who's been sidelined all season. But Harris hasn't been the same.

"I had to carry a lot of the load," said Harris, whose Broncos will host Detroit (3-10-1) on Sunday. “But I'm supposed to be able to handle that. Been able to handle that all along. The last couple of games, just haven't played (like) myself.”

“I wouldn't necessarily say he's had a down year,” Simmons said. “Maybe statistically not as great as he would have liked, but he's been an intricate part of what we've been doing.”

Broncos pass rusher Von Miller showed his emotion after the Chiefs loss by saying it "defeats my soul to go out there and play the way we play and lose the way we lose.”

"I mean, of course it's been hard the last four years," Harris said. “Me personally I've been able to overcome that and be able to shine. This year, I just haven't been able to do that. It's something that I'll try to look in and see what I can do to get better next season."

In Harris' opinion, the Denver players who deserve Pro Bowl nods are Simmons and safety Kareem Jackson, along with defensive linemen Shelby Harris and Derek Wolfe. On offense, Chris Harris pointed toward receiver Courtland Sutton, who has 63 catches for 1,019 yards this season.

Then, a thought struck him.

"Shoot, it's probably three years I didn't make it and should've made it," he said.

He's not dwelling on the thought these could be the last two games of his career with the Broncos.

"Go out there and try to give my best, play hard," Harris said. “Try to end with a good note.”

NOTES: Miller said his comments after Denver's loss to Kansas City didn't mean he wants out of Denver. "I don't want to play anywhere else," Miller said Tuesday. He said his comments were just the raw emotions in the wake of yet another loss. "Football is my identity," Miller said. ... The NFL suspended Jackson on Tuesday for the final two regular season games for violating the league's substance abuse policy. Jackson was arrested Sept. 19 on suspicion of driving under the influence.