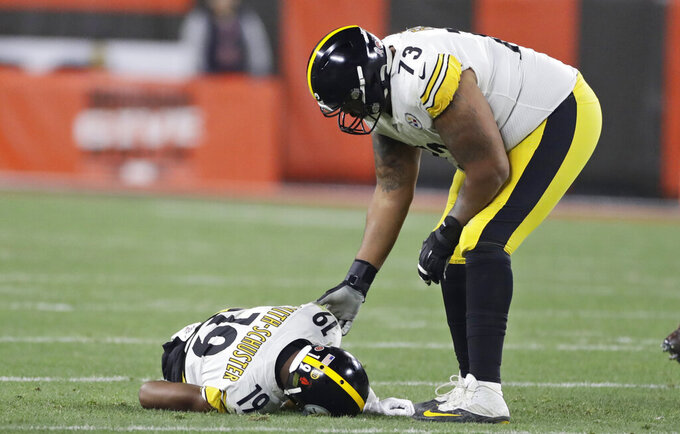 PITTSBURGH (AP) — The Pittsburgh Steelers' patchwork offense could be close to full strength on Sunday when they visit the New York Jets.

Wide receiver JuJu Smith-Schuster and tight end Vance McDonald both practiced Friday, meaning they should be available to face the Jets (5-9) barring a late setback. Smith-Schuster has missed Pittsburgh's last four games while dealing with a knee injury suffered in Cleveland on Nov. 11. McDonald sat out a loss to Buffalo last Sunday with a concussion.

Smith-Schuster admitted he “doesn't feel 100%” and will leave the decision up to coach Mike Tomlin. Smith-Schuster appeared near a return before Pittsburgh faced the Bills but aggravated the injury last week. He was limited in practice on Wednesday and was a full participant on Thursday and Friday. The Steelers (8-6) could certainly use him as they try to move closer to an unlikely playoff berth.

“I think at the end of the day, when it comes down to me playing this weekend it’s a mental game,” Smith-Schuster said. "How strong can I tolerate the pain? It’s a process I can take slow. Hopefully I am able to go this week and play with my boys.”

Smith-Schuster has just 38 receptions for 524 yards and three touchdowns a year removed from a breakout 2018 in which he finished with 111 catches for 1,426 yards and seven scores. Antonio Brown's departure last March, quarterback Ben Roethlisberger's season-ending right elbow injury in September and Smith-Schuster's own health issues have played a major role in the massive drop in his production. Yet he's stayed upbeat for a team that has won 7 of 10 following a 1-3 start.

“I think I can do a lot for this team, being a leader, being a role model for these guys,” Smith-Schuster said. "Moreso just being out there and making plays. Being able to go out there and make those contested catches, doing what I usually do.”

If Smith-Schuster plays, it will mark just the second time since Oct. 28 that both Smith-Schuster and running back James Conner — Pro Bowlers a year ago — will be available in the same game. Conner's been dealing with a shoulder injury since running for a season-high 143 yards against Miami a few days before Halloween. He played briefly against the Browns on Nov. 11 before re-injuring the shoulder and Smith-Schuster exited later in the game with a knee injury and a concussion.