Though Fields struggles, Bears can spread blame for loss 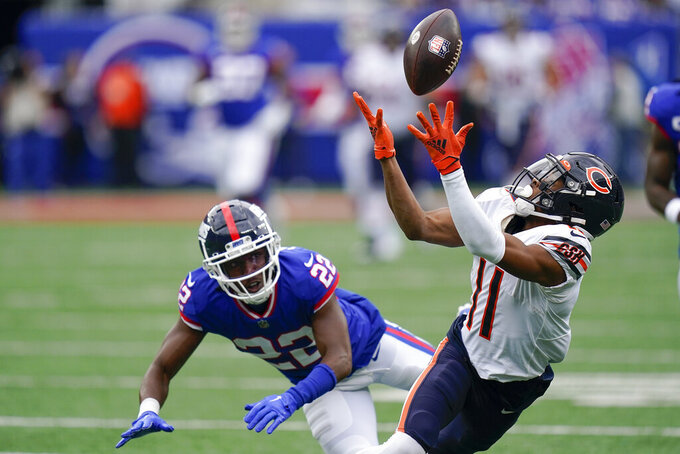 LAKE FOREST, Ill. (AP) — Justin Fields dropped back on the first play of Chicago's second possession and unleashed a perfect throw downfield that a lunging Darnell Mooney hauled in for a 56-yard gain.

At that moment, it looked like the Bears just might kick their passing game into gear. It didn't happen.

Fields had another difficult game. The defense couldn't stop the run. Rookie Velus Jones Jr. muffed a punt in the closing minutes of his debut.

There was plenty of blame to go around for Chicago in a 20-12 loss to the New York Giants on Sunday. The Bears (2-2) will try to regroup when they visit Minnesota this week.

Chicago figures to be without an important player on its offensive line for a while. Left tackle Cody Whitehair injured his right knee against the Giants.

Coach Matt Eberflus said Monday he didn't have a timetable for Whitehair's return, adding that he would have more information on Wednesday. Asked if he expected Whitehair to play again this season, Eberflus said, “Yeah, oh yeah.”

The 30-year-old Whitehair has been a fixture on the Bears' line at center and guard since they drafted him in the second round in 2016. He has started 99 games.

The Bears at least look like they will be getting kicker Cairo Santos back this week. Eberflus said Santos was at the team's practice facility after missing after missing Sunday's game for a personal reason.

Michael Badgley made all four field goals against New York after signing during the week. The Bears released him on Monday.

The run game. The Bears managed to leapfrog the Carolina Panthers and no longer rank last in the NFL in total offense. Of course, their passing game has been the problem. The Bears — third in the NFL in rushing through Sunday — had 149 yards on the ground against New York. Khalil Herbert led the way with 77 yards on 19 carries.

The run defense. The Bears ranked last in the NFL against the run after giving up a season-high 262 yards. It's one thing to get carved up by Saquon Barkley for 146 yards. But they bit on fakes and bootlegs and gave up 98 rushing yards to quarterbacks. Daniel Jones ran for 68 yards and the game's only two touchdowns, and Tyrod Taylor added 30 yards in a short stint.

Mooney looked more like the 1,000-yard receiver he was last season than the nonfactor he was through the first three games. He caught four passes for 94 yards, including that big grab early in the game. Considering he had just four catches for 27 yards coming in, the Bears will take it. He had 81 receptions for 1,055 yards last year, his second season.

Though Fields had some promising moments like that long pass to Mooney, the second-year pro had another rough game. He was 11 of 22 for 174 yards and got sacked six times by a defense that came in with three sacks in its first three games. Fields was also quick to run rather than stay in the pocket and took more hits as a result. And he missed out on a potential big play late in the first half.

The Bears had third-and-10 at the New York 35 when Mooney broke open down the middle. Fields ran for 12 yards instead of throwing for a potential touchdown, and the Bears settled for a field goal that cut the Giants' lead to 14-9.

Mooney said the play called for him to bend more to the right. But he had what looked like a clear path to the end zone.

“It's like a four-vertical play,” he said. “I think it was moreso my miss, just thinking-wise. That’s where it becomes like a hassle of just like trying to learn the playbook so much.”

0 — The number of touchdowns the Bears had on three trips inside the 20.