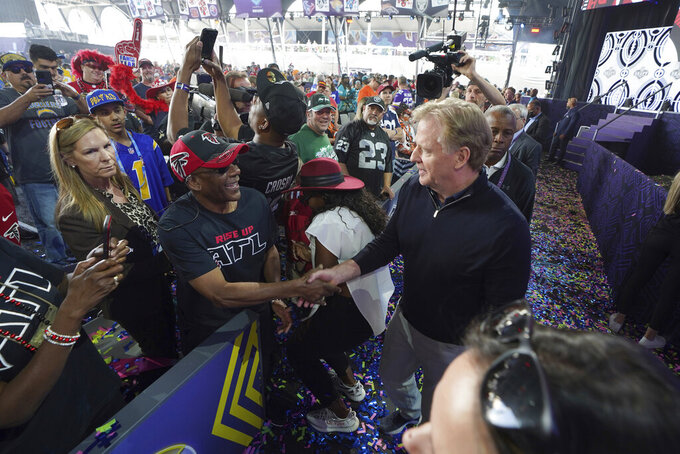 FILE - NFL Commissioner Roger Goodell interacts with fans during the 2022 NFL Draft in Las Vegas, Saturday, April 30, 2022. Las Vegas oddsmakers had argued for years that sports betting is easier to monitor where it's legal and regulated. (AP Photo/Doug Benc, File)

LAS VEGAS (AP) — Jay Kornegay, who has built a reputation as one of Las Vegas' top sports book directors, spoke at a conference in Indianapolis several years ago that included the major professional sports leagues, the NCAA and the FBI.

Only four states offered legalized sports betting at the time, and only Nevada was allowed to take single-game bets.

“What I explained to them back then is we were on the same side,” said Kornegay, vice president of race and sports operations at Westgate Las Vegas. "That integrity of the games was the utmost important thing. We wanted all games to be fair and true. We didn't want to accept wagers on something that was predetermined, so it was in our best interest to report any suspicious activity, any type of unusual betting.

“Yet we were like the plague. Nobody wanted to talk to us for the longest period of time."

That has changed dramatically, most notably in the NFL, which for years wanted to keep more than an arm's distance from Las Vegas and sports betting.

Now the NFL, as well as the other major pro leagues and the NCAA, openly embrace the city and the industry.

“By the time I got involved in the conversation with the NFL, we've gotten over the era of where the answer was just 'no' right from the start regardless of what the question was," said Steve Hill, who became CEO and president of the Las Vegas Convention and Visitors Authority in 2018.

The relationship began to thaw when NFL owners started to seriously consider the Raiders' plans to move to Las Vegas from Oakland, California. They voted 31-1 in favor in March 2017.

“There was a realization by that point that regulated gaming was a better environment than unregulated gaming,” Hill said. “And the whole gaming industry was helping to bring fans to sport. It was a real opportunity, not a negative. Nevada was obviously a leader in that for decades, but it took a while for that message to be heard and take hold."

The U.S. Supreme Court also had much to do with that new relationship when it overturned the Professional and Amateur Sports Protection Act in 2018. The act outlawed sports betting, except where it already was legal, such as in Nevada.

Now more than 30 states plus Washington, D.C., have legalized sports betting, which has created a money-making opportunity for the leagues.

“Once they got a cut, everything was fine and dandy," Kornegay said. "I get that part. I understand. I’m not sore at the decades that I worked in this industry that they frowned upon us. I wish it was the other way because I thought it was a better way to accept sports wagers in a regulated environment versus through illegal channels.”

Las Vegas sports books have tipped off authorities when they’ve noticed a betting irregularity, such as an inordinate amount of money being wagered on a particular team.

That was the case in 1994 when Jimmy Vaccaro, then the sports book director at The Mirage, alerted the Nevada Gaming Control Board, the FBI and the Pac-10 Conference that there was an unusual amount of money bet on an Arizona State basketball game against Washington. That led to an investigation that resulted in criminal convictions.

Vaccaro, now the South Point sports marketing director, said there's a general misunderstanding by leagues about how his business works. If a four-point favorite, for example, wins by exactly that many points, that’s bad news to Las Vegas sports books because the game is a push and all the bets are refunded.

“They think at times that we know the final score," Vaccaro said. "They actually talk about silly things. They talk about things that if you knew anything about this racket on our side that you wouldn't have to ask the question. You would know the answer already.”

“We had to run a proper business, and that's exactly what we did. But I think people from outside didn't view it that way.”