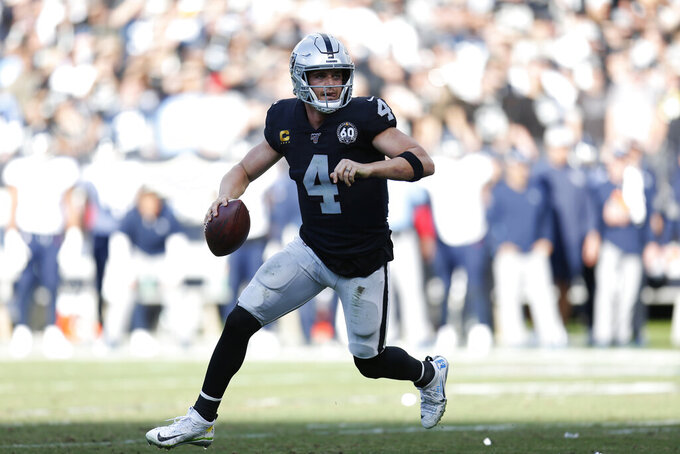 Oakland Raiders quarterback Derek Carr (4) rolls out to pass against the Tennessee Titans during the first half of an NFL football game in Oakland, Calif., Sunday, Dec. 8, 2019. (AP Photo/D. Ross Cameron) 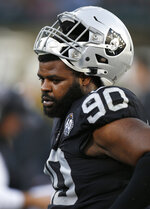 OAKLAND, Calif. (AP) — Derek Carr rolled to his right and waited several seconds for a receiver to break open in the end zone. When nobody did, Carr ended up throwing the ball away out of bounds on fourth down.

While the latest loss for the Oakland Raiders may have been long decided by the time of that head-scratching play, it was emblematic of another rough day that has put a serious damper on what had been a promising season just a few weeks ago.

Carr and the Raiders failed to score a single point in the second half on the way to their third straight lopsided loss, 42-21 to the Tennessee Titans on Sunday.

The loss all but ended the playoff hopes for the Raiders (6-7), bringing out the boo birds from the fans at the second-to-last scheduled game at the Coliseum before the team moves to Las Vegas.

"It's happened before," Carr said of the booing. "You play here long enough it will happen. We have a rowdy group and that's why we love them. They're passionate. They just want to win. Even when they're mad at you it's just like family. Even though they're mad at you they still want to hug you. They still want to do well. I understand their frustration. I showed some emotion, too. I don't think anything of it."

Just a few weeks ago it appeared as if the Raiders could deliver a final playoff run in Oakland before leaving town. They had a 6-4 record headed into a trip to New York to face the Jets but have now been outscored by 83 points in successive losses to New York, Kansas City and Tennessee.

A win against the Titans could have kept the Raiders in the thick of the playoff race and the team started off well with Maurice Hurst getting an interception on the opening drive and Carr throwing two TD passes in the first half, including a late one to Foster Moreau that tied the game at the break.

That all changed after halftime. Carr took a sack on third-and-2 from the Houston 39 on the opening possession of the half. Oakland then went three-and-out the next two possessions, leading to a pair of touchdowns for the Titans.

"On offense we just bogged down," guard Richie Incognito said. "Three-and-outs, our Achilles' heel. When we're going three-and-out and not picking up first downs and going down and scoring points, it's tough. The offense put the defense and the rest of the team in a tough position to start that second half, and they just exploded on us."

Darren Waller then lost a fumble that Jayon Brown returned for a score, making it 42-21 early in the fourth quarter and the rout was on. Oakland then had one more punt before Carr's fourth-down throwaway.

"I think he kept the play alive for 12 seconds," coach Jon Gruden said. "It wasn't like he just aborted the ball. He exhausted that play for what it was. I'm not going to be one to stand up here and say that was a turning point in the game."

That had happened earlier on a day when the Raiders allowed Ryan Tannehill and the Titans to gain 552 yards, including a 91-yard TD pass to rookie A.J. Brown.

The Raiders were hurt by the fact that star running back Josh Jacobs (shoulder), right tackle Trent Brown (pectoral) and slot receiver Hunter Renfrow (ribs) all missed the game and Moreau left in the second half with a knee injury. Oakland has also lost safeties Johnathan Abram and Karl Joseph to season-ending injuries but the team didn't want to make excuses.