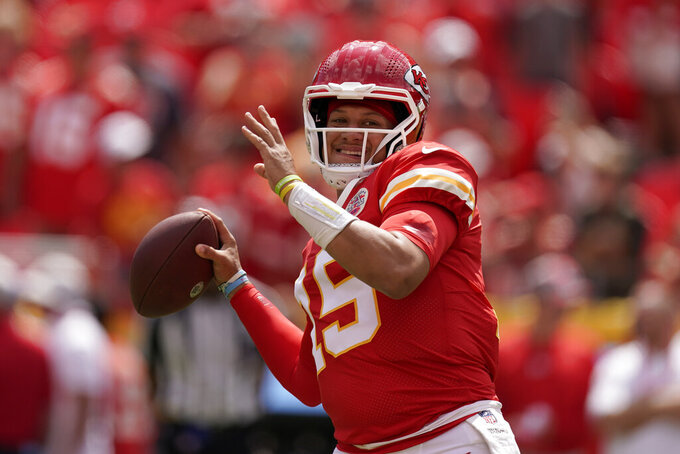 DENVER (AP) — The AFC West no longer looks like such a cakewalk for the Kansas City Chiefs now that Tyreek Hill is dashing past defenders in Miami.

Not only did the Chiefs shockingly send Patrick Mahomes' top receiver to the Dolphins for a fistful of draft picks, but their rivals all made major moves in hopes of ending Kansas City's divisional dominance.

— The Chargers invested more than $70 million on defensive free agents as they surround QB Justin Herbert with a better roster. They acquired LB Khalil Mack and ex-Patriots CB J.C. Jackson, who had an NFL-high 25 interceptions over the past four seasons. They also made Derwin James the league's highest-paid safety with a four-year, $76.5 million deal.

— The Raiders hired Josh McDaniels as coach to replace interim Rich Bisaccia, who helped lead them to the playoffs for just the second time in 19 years. They also acquired star DE Chandler Jones and traded for star WR Davante Adams, who left Aaron Rodgers to reignite his college connection with Derek Carr, his teammate at Fresno State.

With the Broncos finally solving their quagmire at quarterback, the AFC West now has perhaps the best group of QBs of any division in the league.

It should be more competitive in 2022, too, as the Chargers, Broncos and Raiders try to snap Kansas City's six-year reign atop the division.

The Broncos haven't won the West since 2015. The previous time the Chargers won it was in 2009, and the Raiders' most recent crown came way back in 2002.

The Chiefs can't replace Hill's explosive speed, but they did provide Mahomes with plenty of new playmakers to complement TE Travis Kelce. They signed JuJu Smith-Schuster away from Pittsburgh and Marquez Valdes-Scantling away from Green Bay and used a second-round pick on Skyy Moore of Western Michigan.

“We’re going to be different,” Mahomes said, "but I think we’ll still be able to go out there and have a ton of success.”

Maybe, but it's not going to be easy for the Chiefs to host a fifth consecutive AFC championship game. Aside from playing in the toughest division in football, where all four teams have legitimate playoff aspirations, the Chiefs also face the AFC South and NFC West along with the Bills, Buccaneers and Bengals.

Nobody has had more passing yards, completions and TD throws in his first two years in the NFL than Herbert, and he could take a big leap in production this season now that he's grown more comfortable in the Chargers offense.

“He’s just a lot looser than usual. He’s just a lot more comfortable. When you come in year one, kind of shy, don’t want to talk a lot,” wide receiver Mike Williams said. “But now, he’s taken control and been himself.”

“I’m really excited for this team. I think we are miles ahead of where we were at this point last year,” said Herbert, who threw for a franchise-record 5,014 yards and had nine 300-yard passing games last season.

Wilson is the Broncos' 11th starting quarterback since Peyton Manning retired, and the new transplant has huddled aplenty with the Hall of Famer who still lives in Denver and was a frequent visitor at training camp.

"We've been talking a lot,” Wilson said. “Since I’ve gotten here, he’s kind of taken me under his wing in a beautiful way. (Peyton’s wife) Ashley (Manning) has taken ‘Ci’ (Ciara) under her wing in helping with thoughts, schools, this, that and where to eat.

“The thing that Peyton and I both love is football. We can spend all day watching football together,” Wilson added. “It’s fun to be able to be around arguably the world’s greatest who has ever played the game at that position.”

And one who's been through what Wilson is about to experience.

McDaniels gets his second chance as a head coach in the same division where he flamed out in less than two seasons with the Broncos more than a decade ago.

“I feel like I’ve learned a lot,” said McDaniels. “I feel like it’s slowed down for me for sure."

A notoriously creative play-caller, McDaniels gets to direct an offense that features an established QB and one of the game's best pass-catching trios. Adams has averaged 108 catches since 2018, TE Darren Waller is one of the best at his position and slot WR Hunter Renfrow had 103 receptions for 1,038 yards last season.