Barrett, Gronkowski agree to deals to stay with Buccaneers 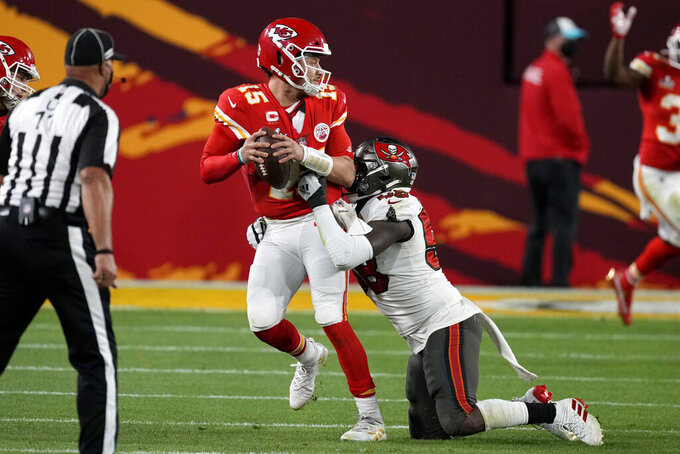 Kansas City Chiefs quarterback Patrick Mahomes (15) looks to throw a pass while in the grasp of Tampa Bay Buccaneers outside linebacker Shaquil Barrett, right, during the second half of the NFL Super Bowl 55 football game, Sunday, Feb. 7, 2021, in Tampa, Fla. (AP Photo/Chris O'Meara)

Linebacker Shaquil Barrett and tight end Rob Gronkowski, who came out of retirement 11 months ago to help Brady win No. 7 in his first season with the Bucs, are the latest players to agree to terms to stay with the team.

Agent Drew Rosenhaus represents both players and confirmed the deals to The Associated Press on Monday.

Barrett agreed to a four-year, $72 million contract. Gronkowski will return for his 11th season with Brady on a one-year, $10 million deal — up from the $9.25 million he earned after arriving in Tampa Bay from the New England Patriots in a trade last April.

Barrett has been one of the NFL’s top pass rushers over the past two seasons and earned $15.8 million in 2020, when he played under the franchise tag after leading the league with 19½ sacks in 2019.

The moves Monday were the fourth and fifth general manager Jason Licht and coach Bruce Arians have made in the past week to ensure key players on the verge of becoming unrestricted free agents would not wind up testing their worth on the open market.

The team placed the franchise tag on wide receiver Chris Godwin and signed linebacker Lavonte David to a salary-cap friendly, two-year deal worth up to $25 million before Brady agreed to an extension that will keep the three-time NFL MVP under contract through 2022.

Re-signing Barrett, however, was by far the top priority this winter. He followed his 2019 breakthrough season with eight regular-season sacks in 2020 last season and four more during Tampa Bay’s postseason run — three in the NFC championship game and one in the Super Bowl.

Barrett spent the first five seasons of his career primarily as a backup with the Denver Broncos. He signed a one-year, $4 million deal with Tampa Bay in free agency in 2019 and has 27½ sacks in 31 regular-season games since joining the Bucs.

Gronkowski played nine seasons with Brady in New England before retiring after the 2018 season. He agreed to play again after the 43-year-old quarterback left the Patriots in free agency and signed with the Bucs last March.

Mike Evans and Chris Godwin were the team's top receivers in 2020, however Gronkowski appeared in all 16 regular-season games, finishing with 45 catches for 623 yards and seven touchdowns.

The tight end had six receptions for 67 yards and two TDs in the Super Bowl.