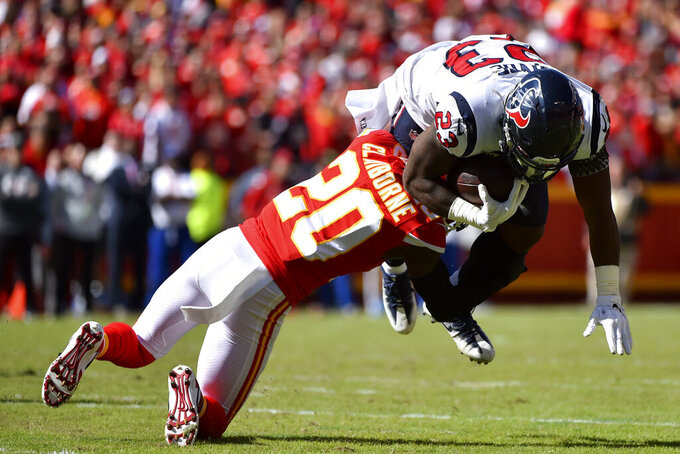 KANSAS CITY, Mo. (AP) — The first finger that Andy Reid points after the Kansas City Chiefs lose a game is at himself, regardless of the score, the opponent or whatever may have transpired on the field.

The old coach willingly shoulders more than his share of the blame.

He probably deserved much of it Sunday.

The Chiefs lost 31-24 to the Texans, their second straight defeat at Arrowhead Stadium, and one that was punctuated by a laundry bin full of yellow flags, more dropped passes than in most Pop Warner games, and questionable decisions made by Reid all afternoon.

"I have to do a better job getting our team ready to go," he said, before anyone had a chance to ask a question. "We need to be more disciplined than what we saw with the penalties and drops and so on. We have a lot of things we need to work on here to get turned around. We have to do it better."

The Chiefs were penalized 11 times for 79 yards, three of which resulted in first downs. But they were actually flagged 16 times — four were declined, another was offsetting — one week after they had 11 penalties for 125 yards in a 19-13 loss to the Indianapolis Colts.

So even though Reid was never called for holding, the penalty du jour on Sunday, the coaching staff clearly didn't do enough to stop the flow of flags from last week to this week.

But while penalties and dropped passes and a myriad other mistakes can be chalked up to miscues or misfortune on behalf of the players, some questionable decisions fall directly on the head coach.

Chiefs safety Juan Thornhill had just picked off Texans quarterback Deshaun Watson in the end zone to prevent points, and seemingly preserving a 17-16 halftime lead. But despite having just 23 seconds on the clock, and a quarterback hobbled by a sore ankle, the Chiefs called a pass play from their own 20.

Patrick Mahomes dropped back, the pocket quickly collapsed, and Texans defensive end Charles Omenihu reached out his paw and knocked the ball lose. Benardrick McKinney immediately pounced on the fumble, giving Houston the ball at the 3-yard line.

Watson scrambled in for a touchdown on the very next play to give Houston the lead.

"For us, how we feel and how we act as an offense is we're going to try to score every single drive," Mahomes said in defense of the play-calling. "There were some drives in the second half where we couldn't get going. We have to find ways to score when it's a close ballgame and at the end."

Indeed, there were more questionable calls in the third quarter, when Watson was again picked off in the end zone, this time by Charvarius Ward. The Chiefs led 24-23 at that point, but three consecutive pass plays fell incomplete and they were forced to punt the ball back to Houston.

Twelve plays, 93 yards and 8 1/2 minutes later, Watson scrambled in for his second TD run, and his 2-point conversion pass to DeAndre Hopkins gave the Texans a 31-24 lead with 6:17 to go.

Still, the Chiefs had an opportunity to march downfield for a tying touchdown. But a pass to LeSean McCoy was stopped for a loss, putting them in a second-and-14 and at their own 21-yard line. And rather than put the ball in the hands of the reigning league MVP, the Chiefs elected to run — and McCoy went nowhere, earning a round of lusty boos from the antsy crowd in Arrowhead Stadium.

Mahomes proceeded to throw an incomplete pass on third down, the Chiefs punted yet again, and this time the Texans managed to drain the final 5:03 off the clock to preserve the victory.

"We did some good things," Reid said, "but we have to cut down on the penalties all the way around, whoever is making whatever. There were quite a few holding penalties there, on both sides of the ball.

We have to finish stronger," he added. "We have to do a better job all the way around."