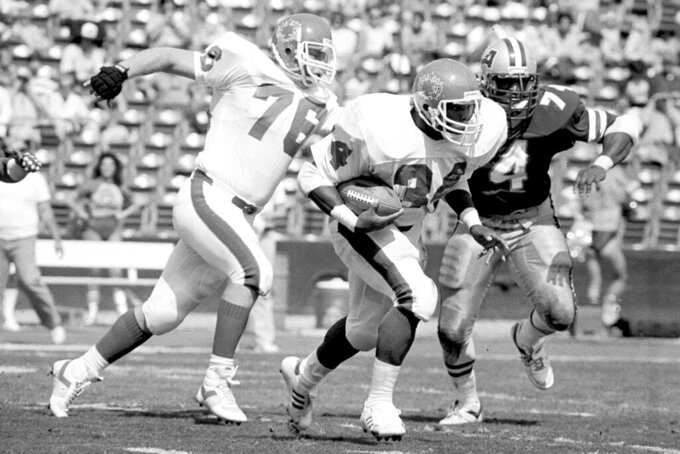 FILE - New Jersey Generals Herschel Walker, center, carries the ball for a first down past General's Bryan Millard, left, and Los Angeles Express' Dennis Edwards during the first quarter of an USFL game in Los Angeles on March 6, 1983. The original USFL was a league that made a whole lot of sense, only to be undone by the greed and hubris of owners such as former President Donald Trump, who saw the fledgling organization as a conduit to the NFL. (AP Photo/File)

Pro football in the springtime.

An idea that once had so much promise.

Now, no matter how many of these leagues keep popping up, there's little chance of carving out even a tiny niche on the American sports scene.

Give it up, USFL.

Ditto for you, XFL.

A revived United States Football League — borrowing the moniker and team nicknames from a league that went out of business 36 years ago — launched last month with all regular-season games being played in Birmingham, Alabama.

USFL, The Sequel is following a familiar formula for spring football in recent years: a bunch of unknown players, sloppy play and games played in front of mostly empty seats.

Sadly, this watered-down version of the USFL has done little more than rekindle memories (at least for those of us old enough to remember) of the last upstart league in a major American sport that actually had a chance to make it.

The original USFL, which played for three seasons beginning in 1983, was a concept that made a whole lot of sense, only to be undone by the hubris of owners such as future President Donald Trump, who saw the fledgling organization mainly as a conduit to the NFL.

The league might still be around today if it had stuck to the plan laid out by New Orleans businessman David Dixon, who believed there was a market for pro football in the spring and early summer.

His vision led to a promising setup with plenty of NFL-caliber players.

“I would say that four teams in our group could have competed on an NFL level," recalled Tom Banks, a longtime NFL center who played the first two seasons with the original Birmingham Stallions. “We had a lot of good players and a lot of good coaches.”

Dixon envisioned a league with teams in major U.S. markets, playing in NFL-caliber stadiums, boosted by a national television contract but keeping costs under control with a salary cap-style mechanism.

The Stallions were a team that largely stuck to that philosophy, assembling a roster that included Banks, running back Joe Cribbs, quarterback Cliff Stoudt and receiver Jim Smith.

But it could've worked — especially given the state of American sports when the USFL debuted:

—The NFL, while enormously popular, had not yet become the year-round behemoth it is today.

—Major League Baseball had yet to expand to Phoenix, Denver or Tampa Bay, which all landed teams in the original USFL.

—The NHL was largely a regional operation, basically unknown outside the Northeast and Midwest and lacking a major TV deal.

—The North American Soccer League was on its last legs and would fold in 1984. Major League Soccer didn't come along until 1996.

In that setting, there was room for another football league.

Spring football has no chance of succeeding in a timeframe now ruled by the NBA and NHL playoffs, the start of baseball season, college basketball's NCAA tournaments and an NFL that never really takes an offseason.

Throw in Major League Soccer, which will grow to 29 teams next year, and the increasing popularity in the U.S. of England's Premier League and Europe's Champions League.

If the USFL had stuck to Dixon's plan, there's a chance it would still be around to this day, perhaps stifling the growth of basketball, hockey and soccer.

Instead, the league expanded too quickly, took in dubious owners and basically sealed its fate with an ill-fated plan pushed by Trump and others to move to the fall and compete directly against the NFL.

That led to an anti-trust suit won by the USFL in 1986, but it was a hollow victory to say the least. The jury awarded a single dollar in damages, which was automatically tripled to $3 under federal law.

The USFL quietly went out of business. Apparently, it never even cashed the check the NFL dutifully sent along to cover the judgment.

Since then, none of the myriad efforts to start a spring football league has been as bold as the original USFL.

Now, we have this new version of the USFL, with a third attempt at the XFL supposedly on tap for 2023 (we're not holding our breath for that one).

The Fox-owned USFL is holding down costs by playing in a single city. But that has created the embarrassing spectacle of games not involving the hometown Stallions being played largely before family and friends.

“You've got to draw more people to the games,” Banks said. “It's got to be depressing for the guys trying to play. You feed off the energy of the crowds."

Like every other spring league since the original USFL, there is no pretense about landing big-time players. These are the leftovers, pure and simple.

“They really haven't emphasized the players,” Banks said. “I don't know very much about these guys individually, and I still follow the game pretty well.”

Fox, NBC and their affiliated networks have been jamming four games a weekend down our throats, pumped up by over-the-top announcers trying to con us into believing this is actually a worthwhile pursuit. But the ratings through the first three weeks have been largely abysmal.

Thanks to the court decision that finished off the original USFL, it will forever be known as "The $3 League."

The new USFL is not even worth that much.