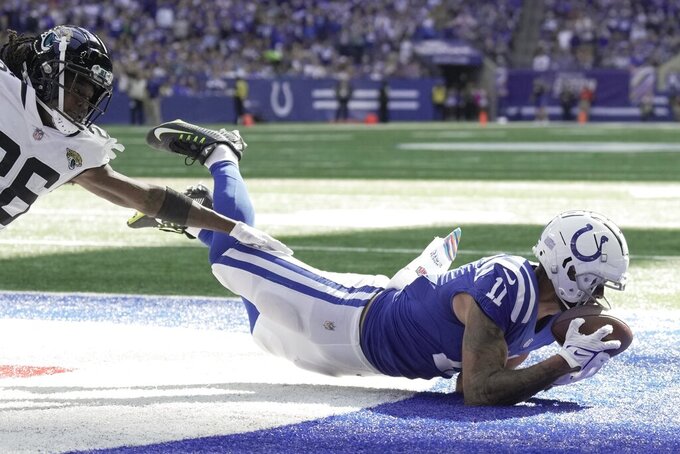 CORRECTS TO MISSES A CATCH NOT MAKES A CATCH FOR A TWO-POINT CONVERSION - Indianapolis Colts' Michael Pittman Jr. (11) misses a catch against Jacksonville Jaguars' Shaquill Griffin (26) during the second half of an NFL football game, Sunday, Oct. 16, 2022, in Indianapolis.(AP Photo/AJ Mast)

The veteran cornerback was picked on repeatedly by the Colts and beaten by a rookie receiver for the winning touchdown in a 34-27 loss Sunday. It was Griffin’s worst performance in two years with the Jaguars and should be a clear sign that general manager Trent Baalke needs to start looking to upgrade the all-important coverage position.

Griffin is the team’s highest-paid player, making $11.5 million in guaranteed salary this season and counting $16.4 million against the salary cap. He signed a three-year, $40 million contract in free agency in 2021 and looked like a lockdown cornerback at times last season.

But he was the defense’s weakest link Sunday, unable to cover Michael Pittman or Parris Campbell. He really got exposed on a third-and-1 play at the Jacksonville 32-yard line with the game on the line.

The Colts trailed 27-26 with 23 seconds remaining and were in position for a long field goal. Instead of running the ball, Indianapolis took a shot deep. Rookie Alec Pierce had a step on Griffin when Matt Ryan lofted the pass toward the end zone. Pierce caught it at the 5, with Griffin watching helplessly from the turf.

“That one hurt,” Griffin said.

Griffin also was flagged twice for pass interference, with both penalties setting up touchdowns. The first one came on a third-and-long play.

“I feel like we had a lot of plays where we kind of hurt ourselves,” he said. “I just felt like every time we’re looking to get off the field on third down, we kind of shot ourselves in the foot. Those are things you can’t get back, and it’s tough. ... That was on us.”

Griffin and the Jaguars (2-4), who have lost three in a row, get a chance to end their skid when they host the New York Giants (5-1) on Sunday. Jacksonville has dropped an NFL-record 18 straight to NFC teams.

Jacksonville finished with 243 yards rushing, the fifth-most in franchise history and the team’s most in a loss. The ground game helped take some pressure off struggling quarterback Trevor Lawrence and kept the Colts off-balance during an 18-play, 84-yard drive that took 12 minutes off the clock in the fourth quarter and gave the Jags a lead their defense ultimately squandered.

“We’ve just got to find a way to finish,” coach Doug Pederson said.

The Jaguars were held without a sack for the first time this season. Indy provided a blueprint for beating Jacksonville’s aggressive front: quick passes that prevent edge rushers Josh Allen and rookie Travon Walker from being too disruptive. It was a complete turnaround from the previous two meetings in which Jacksonville notched a combined 11 sacks.

“You guys see how hard he runs. Obviously, his speed helps us lots,” Lawrence said.

Walker, the overall No. 1 pick in April’s draft, had a costly penalty for the second straight week. He was flagged for roughing the passer on a third-and-12 play — an incomplete pass — that gave the Colts a new set of downs and helped set up a third-quarter touchdown.

A week earlier, Walker tossed Texans quarterback Davis Mills to the ground long after the whistle, drawing a 15-yard penalty for unnecessary roughness and turning a third-and-20 play into a first down. Houston found the end zone seven plays later.

Agnew injured his right knee but was able to return. Defensive tackle Foley Fatukasi (quadriceps) and receiver Marvin Jones (hamstring) could return after being inactive against the Colts.

18 – The number of consecutive losses by the Jaguars against NFC teams. Their last NFC victory came in the 2018 season opener at the New York Giants. The Jaguars can end the skid against the Giants.

The Jaguars have made the playoffs just once (in 1996) in franchise history after losing at least three in a row during the regular season.