Jets to induct Revis, Mangold, Ferguson into Ring of Honor 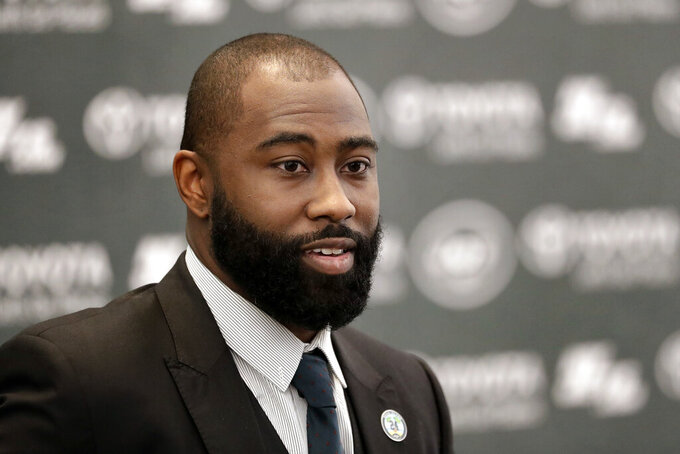 FILE - Former New York Jets cornerback Darrelle Revis speaks during a news conference officially announcing his retirement from NFL football, Tuesday, July 24, 2018, in Florham Park, N.J. The Jets will induct former cornerback Darrelle Revis, center Nick Mangold and left tackle D'Brickashaw Ferguson into the team's Ring of Honor during separate halftime ceremonies this season. The team announced Thursday, June 2, 2022, that Mangold will be the first honored with a ceremony during the Jets' game against Cincinnati on Sept. 25. Ferguson's induction will be Oct. 30 against New England, and Revis' will be Nov. 27 against Chicago. (AP Photo/Julio Cortez, File)

The team announced Thursday that Mangold will be the first honored with a ceremony at MetLife Stadium during the Jets' game against Cincinnati on Sept. 25. Ferguson's induction will be Oct. 30 against New England, and Revis' will be Nov. 27 against Chicago.

The three played most of their NFL careers together with the Jets and are among the most popular players in franchise history. They are also the first players to be inducted into the team's Ring of Honor since Pro Football Hall of Fame center Kevin Mawae in 2017.

Revis spent eight of his 11 NFL seasons with the Jets after being the No. 14 overall pick out of Pittsburgh in 2007. He's considered one of the game's greatest shutdown cornerbacks — with his “Revis Island” nickname a nod to how often he completely locked down opposing wide receivers during his prime.

Revis played for the Jets from 2007-2012 and again from 2015-16 with one-year stints in Tampa Bay and New England in between. He ended his career after a season with Kansas City in 2017. He made three straight AP All-Pro teams from 2009-11 with New York and was selected to five Pro Bowls with the Jets. Revis' 25 interceptions with New York rank third on the franchise's career list.

Mangold and Ferguson came to the Jets together in 2006 when both were first-round picks — Ferguson going fourth overall out of Virginia and Mangold 29th out of Ohio State. Both also played their entire careers with the franchise.

Mangold was one of the NFL's best centers during his career, with his seven Pro Bowl selections second to only Pro Football Hall of Famer Winston Hill's eight for the most all-star games in franchise history. Mangold was a two-time AP All-Pro pick and started all 164 games he played during his 11 NFL seasons.

“Truly an honor to join the greats,” Mangold wrote on Twitter. “Thank you to the @nyjets, @woodyjohnson4, all my teammates over the years, and to all the passionate Jets fans that bleed green. Sept. 25th is going to be a hell of a party at MetLife!”

Ferguson was a constant on the Jets' offensive line during his 10-year career, never missing a game or practice. A three-time Pro Bowl selection, Ferguson started 160 consecutive games and played 10,707 out of a possible 10,708 snaps — with the lone miss coming when the Jets lined up for a desperation lateral on the final play of a 24-17 loss to Miami in 2008. Coincidentally, Revis lined up at Ferguson's left tackle spot on the play.