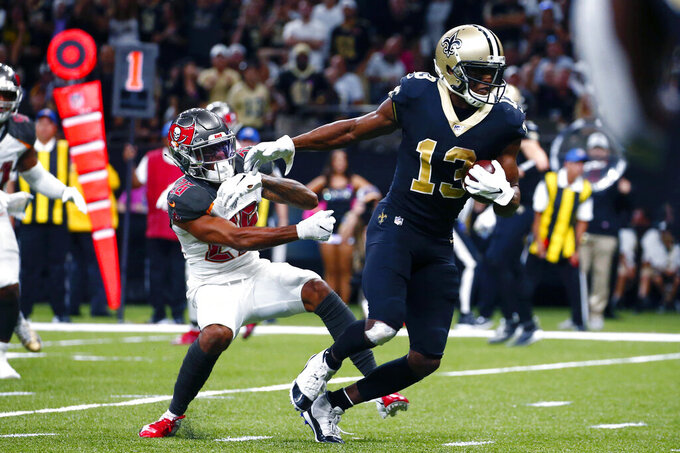 TAMPA, Fla. (AP) — There are plenty of reasons why the Tampa Bay Buccaneers have a losing record through five games, none more glaring than a struggling secondary that coach Bruce Arians says is not nearly physical enough for his taste.

The 66-year-old coach, in his first season of trying to transform a team that hasn't made the playoffs since 2007 into postseason contenders, went as far as to call his defensive backs "soft" following Sunday's 31-24 road loss to the New Orleans Saints.

Arians was asked Monday how he expects the mostly-young group of cornerbacks and safeties will respond to his characterization as the Bucs prepare to travel to London this week to host the Carolina Panthers on Sunday.

The Bucs have had one of the league's leakiest pass defenses for most of the club's 12-year playoff drought. The difficulty general manager Jason Licht and three different coaching staffs that have been assembled during the GM's tenure have had fixing the problem is reflected in the fact the team has used eight high draft picks over the past three years on defensive backs who've yet make much of a difference.

Nevertheless, Arians remains confident that rookies Mike Edwards, Sean Murphy-Bunting and Jamel Dean, whose development has been slowed by injury, can help as the season progresses.

Jameis Winston and the passing attack continue to make strides, even though the Saints were able to hold WR Mike Evans without a catch for only the second time in his six-year career. With defenses paying extra attention to Evans, third-year pro Chris Godwin continues to thrive. He had his third straight 100-yard game at New Orleans, finishing with seven receptions for 125 yards and two touchdowns.

The offensive line struggled against the Saints, who sacked Winston six times. Right tackle Demar Dotson and right guard Alex Cappa were injured Sunday, so the unit's depth will be tested.

Winston didn't have a huge game, but he played fairly well for the fourth straight week. The Bucs finished with just 252 yards total offense, in large part because they were unable to get the running game going and continue to struggle to convert on third down.

CB Vernon Hargreaves' play has slipped since returning an interception for a touchdown in the season opener against San Francisco and making a game-saving stop of Christian McCaffrey on fourth-and-less-than-yard from the Bucs 1 in the closing minutes a 20-14 victory over Carolina in Week 2.

"I'd like to have better. I think he's capable of better," Arians said. "He's got great hands, he's got great anticipation, he's a very smart player, so yeah, I would expect a little bit more."

Dotson (hamstring) likely won't play against Carolina. Cappa has a broken arm and is expected to miss "a few weeks," Arians said.

About 20,400. Approximately the number of miles the Bucs will have flown by the time they complete a stretch of five games is which they won't play at Raymond James Stadium before home to face the Arizona Cardinals on Nov. 10.

Host Panthers in London on Sunday.