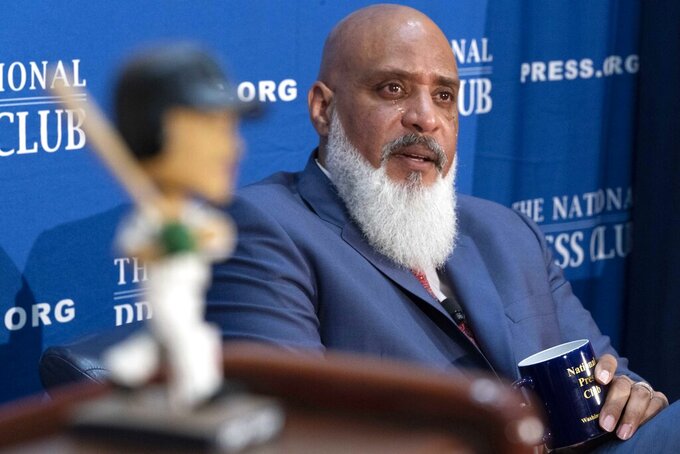 Executive Director of the Major League Baseball Players Association Tony Clark gets emotional as he speaks during a news conference at the Press Club in Washington, Wednesday, Sept. 7, 2022. (AP Photo/Jose Luis Magana)

WASHINGTON (AP) — The Major League Baseball Players Association is joining the AFL-CIO in an effort to strengthen its position in the aftermath of one labor struggle and in the midst of another.

Executive director Tony Clark made the announcement Wednesday alongside AFL-CIO President Liz Shuler during an event at the National Press Club, discussing the MLBPA's attempt to unionize minor leaguers following a nearly 100-day lockout that delayed the start of the season.

Clark cited lessons learned from 2020, when minor league baseball was not played, as a major impetus for this decision.

“Over the past couple of years, our experiences have suggested now is the right time to have that conversation," he said. “We are in a world now where strengthening our organization, strengthening our player fraternity by bringing the minor leaguers under our umbrella, as well as joining the AFL-CIO and doing so alongside our brothers and sisters that are part of the labor movement, together we’re going to navigate that chaos, and together we’re going to work through it."

Shuler called it “an incredible moment for the labor movement.” Clark said baseball players want to strengthen their organization by supporting minor leaguers and becoming part of the AFL-CIO.

The MLBPA is the 58th union to affiliate with the AFL-CIO, the largest labor federation in the U.S. with 12.5 million members. The AFL-CIO's Sports Council already included players' associations from the NFL, National Women's Soccer League, United Soccer League and U.S. Women's National Team.

The International Alliance of Theatrical and Stage Employees, whose members are involved in broadcasting and staging major league games, voiced support for the move.

“Today’s announcement was a winning play by the players' association,” president Matthew D. Loeb said in a statement. “We look forward to working in solidarity with the MLBPA to improve both the fan experience and the work lives of our members.”

The MLPBA on Tuesday asked management to voluntarily accept the union as the bargaining agent for minor leaguers. Bruce Meyer, the union’s deputy executive director, sent a letter to MLB Deputy Commissioner Dan Halem that claimed a majority of roughly 5,400 minor leaguers had signed authorization cards.

Clark repeated that assertion Wednesday, saying “thousands” of cards had been returned.

The MLBPA, which reached its first collective bargaining agreement for major leaguers in 1968, launched the minor league unionization drive Aug. 28. Players with minor league contracts, who earn as little as $400 weekly during the six-month season, would become their own bargaining unit within the MLBPA.

If MLB does not voluntarily accept the union, signed cards from 30% of the 5,000 to 6,500 minor leaguers in the bargaining unit would allow the union to file a petition to the National Labor Relations Board asking for a union authorization election. A majority vote in an election would authorize union representation.

“We support the MLBPA’s position, and so we’ll bring the full breadth and scope of the labor movement to back them up,” Shuler said. “And we hope that the league does the right thing.”

Baseball and the players settled on terms of a new collective bargaining agreement in March, ending the sport’s ninth work stoppage after 99 days and clearing the way for a full, 162-game regular season with opening day pushed back a week.