NFL won't be cutting in line for coronavirus vaccine 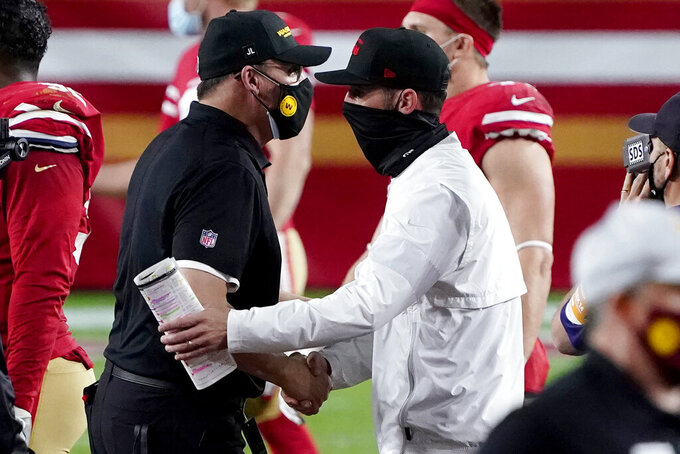 The NFL won’t be cutting in line to get the coronavirus vaccine.

“No one should be thinking about the vaccine going anywhere other than our first responders and the most vulnerable people right now,” said DeMaurice Smith, executive director of the NFL Players Association.

“We’re in complete harmony with the union in that we feel that it’s vital that frontline healthcare workers and another essential service workers are at the front of the line,” said Dr. Allen Sills, the NFL’s chief medical officer.

“The rollout of the vaccine is going to be driven by public health concerns and what medical and government officials determine to be the most efficacious for risk reduction across society as a whole. We’re prepared to support that effort,” Sills said.

The largest vaccination campaign in U.S. history got underway Monday with health workers rolling up their sleeves for the first shots on the same day the nation’s COVID-19 death toll hit a staggering 300,000.

High-risk health care workers and some nursing home residents were among the first in line for the shots that could finally conquer the outbreak that has upended life across the globe.

While the U.S. hopes for enough of the two approved vaccines to vaccinate 20 million people by the end of the month, and 30 million more in January, there won’t be enough for the average person to get a shot until spring.

The NFL will continue spending millions of dollars on daily COVID-19 tests, combined with social distancing and contact tracing to mitigate infections so they can get all 256 regular season games and 13 playoff contests in the books culminating in Super Bowl 55 on Feb. 7 in Tampa, Florida.

On a recent media conference call, Smith and NFLPA president JC Tretter emphasized that football doesn’t deserve any favors or special treatment when it comes to COVID-19 inoculations.

“Football is not an essential business,” Smith said. “While JC and I have a fiduciary duty to our players, I don’t think either of us for a nanosecond forget that we’re fortunate enough to be playing a game while millions of people are out there trying to keep up safe, and that’s where the focus should be.”

Added Tretter, an offensive lineman for the Cleveland Browns, “We as players understand. We don’t expect to jump the line. We know as a community there are people we need to take care of first: the elderly, the most vulnerable and our first responders. So, I don’t think we have any expectation to cut the line in any way.”

Dozens of NFL players, coaches and staff members have contracted the coronavirus this season, but aside from flareups in Nashville and Baltimore, teams have in most cases been able to tourniquet the outbreaks through ever-evolving COVID-19 protocols.

Players will have to continue daily testing, socially distancing through remote meetings, and wearing their masks and contract tracers as they try to make it through the pandemic season without access to the vaccine.

“I would just simply say that we’re proceeding along as if we’ll have to operate the rest of this season through the Super Bowl without a vaccine,” Sills said. “And if circumstances change and it appears appropriate and indicated again from a public health standpoint that we are in a place to offer that, then we’ll have to reconsider that again jointly with the union, but for the present time we’re not counting on that to be impactful into the current season or postseason.”

Once the league crowns a Super Bowl champion in this strangest of seasons, the league will turn its focus to how it will handle the offseason, beginning with free agency, the pro scouting combine and college pro, all of which very well could be virtual with vaccines still being distributed.

“As far as what happens after the vaccine becomes available to the general public, I’m sure that’s going to be a conversation that we’re going to have going forward, and how the vaccine gets rolled out to individual people in our country,” Smith said.

“All I can tell you is I’m far more focused on how the vaccine gets to the people who need it in our country right now,” Smith added. “As long as we continue to wear masks, socially distance, aggressively engage in contact tracing and handle our business as players and as staff and we keep ourselves around this (latest .11 percent) positivity rate, then I think that should be our focus.”

Other notable calls in Week 14 included:

Broncos kicker Brandon McManus missed two extra points in Denver’s 32-27 win at Carolina, and he had another PAT that his coach wiped off the board when the Panthers jumped offsides. With the ball going from the 2 to the 1, Vic Fangio decided to go for 2 just as he did last season against Kansas City.

Like last year, the conversion attempt failed, this time leaving Denver ahead 25-10.

“I figured it was a good opportunity to go up 17 and make it a three-score game, but it didn't work out,” Fangio explained. “So, it’s a 50-50 decision. I chose the wrong one at that time.”

Patriots coach Bill Belichick had a bit of a malfunction with his double mask in New England’s loss to the Rams that kicked off Week 14. Cameras caught Belichick on the sideline adjusting his face covering and it looked like he had a hole cut out for his mouth.

That prompted all sorts of snark on social media, including one poster who cracked Belichick was cutting his mask like it’s a hoodie sleeve.”