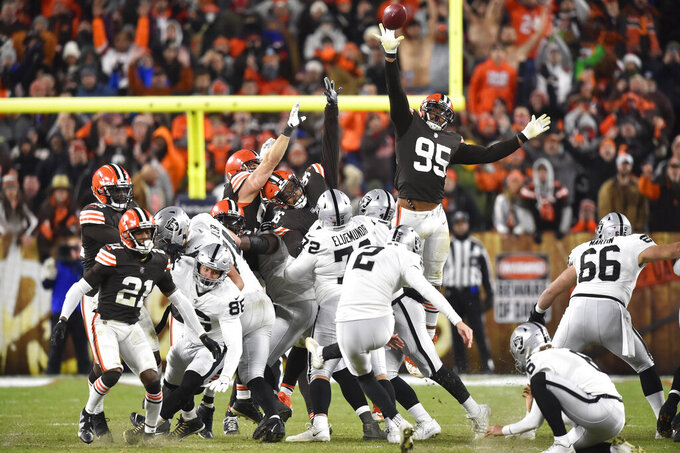 The defense squandered a fourth-quarter lead to a third-string quarterback. The offense could manage only one touchdown against a defense missing several starters.

If ever there was a game that summed up late Raiders owner Al Davis' motto of “Just win, baby!” this 16-14 victory over the COVID-19 ravaged Cleveland Browns on Monday night might have been it.

“I'm real excited for our guys,” interim coach Rich Bisaccia said. “To win a game in that fashion and to play with the effort that they played with all the way to the bitter end, even when it looked like it was probably going to go the other way. ... Well done by our players.”

The Raiders (7-7) didn't do a lot well, but they managed to do enough to remain in the playoff hunt in the AFC.

Things looked bleak when Nick Mullens threw a 6-yard touchdown pass on fourth down to Harrison Bryant with 3:45 left to give the Browns their first lead of the game at 14-13.

The situation only got more dire when Derek Carr threw an interception on the next series on a deep pass to Zay Jones.

But Johnathan Hankins stopped Nick Chubb for no gain on third-and-3 to give the offense another chance and Carr delivered with his 23rd career fourth-quarter comeback.

Two big passes to Jones, including a 15-yarder that set up Daniel Carlson's game-winning 48-yard kick did the trick.

“I went to him and said, ‘I am coming right back to you, and we are winning this game,’” Carr said of his message to Jones after the interception. “I knew I needed him, and I wanted him to know not only do I need you, but I believe in you.”

Run defense. Las Vegas has struggled stopping the run this season but did a good job bottling up Chubb, who was held to 91 yards on 23 carries behind a ravaged offensive line. The 89 yards allowed for the game were the third fewest this season for the Raiders.

Offense. The Raiders were held to 16 points or fewer for the eighth time this season, tied for most in the NFL. They managed to win for the first time this season scoring that few points but the issues on offense still remain. The Raiders have gone back-to-back games without a play from scrimmage gaining at least 20 yards for the first time since 1992 as the deep passes that carried the team early in the season have been hard to find of late.

Carlson once again delivered in the clutch with the game-winning kick after getting iced on his first try. Carlson has made three game-winning kicks this season and is 12 for 13 since joining the Raiders on field goals in the final two minutes of regulation or overtime.

Pass rush. The strength of the Raiders defense this season didn't do much against a makeshift offensive line. Las Vegas had no sacks and just four quarterback hits. After having 21 sacks in the first eight games to rank tied for fifth, the Raiders have just eight in the past six games, tied for fourth fewest.

S Johnathan Abram (shoulder) had an MRI after leaving the game in the fourth quarter and his status is unknown this week. ... The Raiders shut down CB Trayvon Mullen (toe) for the rest of the season but are hoping to get TE Darren Waller (knee, back) and LB Denzel Perryman (ankle) back at some point this season. Bisaccia called them both a “work in progress.” ... CB Nate Hobbs remains on the COVID-19 list.

2-37. The Raiders had won just two games in the past 10 seasons with a minus-2 turnover differential or worse before beating the Browns on a day when Carr lost a fumble and threw an interception and the defense had no takeaways. The Raiders were 2-37 before this win with the only other victories coming in Week 17 last season at Denver and Week 7 in 2012 against Jacksonville.

The Raiders host Denver on Sunday.