Rams relying on Jared Goff to rebound against Seahawks 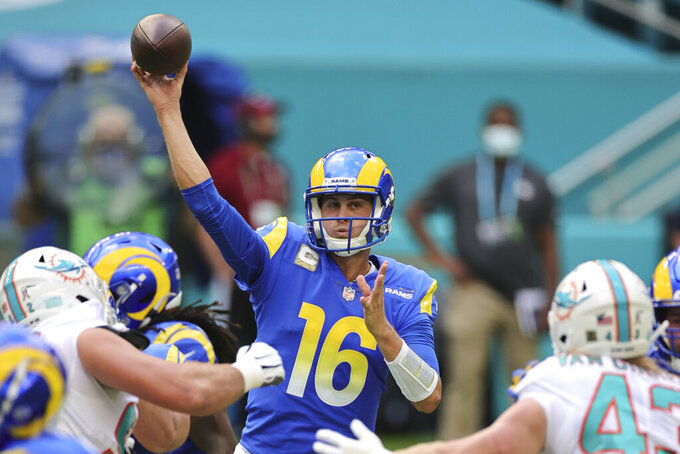 THOUSAND OAKS, Calif. (AP) — Jared Goff needed every day of the Los Angeles Rams' bye week to separate himself from one of the most disappointing games of his career.

When he was asked to discuss that clunker in Miami again this week, he chuckled and said: “I was really trying to get rid of it.”

“I had time to reflect on it and got better from it,” Goff added. "We all did, and we feel good moving forward.”

The quarterback is back at work determined to improve on his four-turnover performance in a 28-17 loss to the Dolphins when the Rams (5-3) host the Seattle Seahawks (6-2) on Sunday.

Miami's defensive strategies in that defeat gave the Rams' opponents plenty to copy over the final eight weeks of the season, but they also raised Goff's attention to the importance of avoiding the mistakes that doomed Los Angeles two weeks ago.

Goff is always fairly nonchalant about his bad games in the immediate aftermath, invariably confident he will rebound. The $134 million quarterback had the same attitude about his struggles against the Dolphins.

“I just keep being me," Goff said. "Just keep working, keep getting better. Obviously that game didn’t go the way we wanted it to, but you’re going to have those, and you try to limit them. But (I'll) just bounce back and be myself.”

Goff is 11th in the NFL with 2,145 yards passing, but his completion rate (65.5 percent) is 24th among players with at least 100 attempts after his 35-for-61 effort in Miami. Although he missed on a handful of big throws, his biggest mistakes against the Dolphins were the turnovers: two interceptions and two fumbles, one returned for a game-changing touchdown.

After a strong start to the season, Goff hasn't put up impressive numbers in the Rams' past three games. Opposing defenses and their pressure played a major role in Goff's slump, but the Rams clearly need more out of their franchise quarterback, even if a coaching staff led by Sean McVay would never dream of calling out any individual player for mistakes.

“Jared and I have talked a lot about him individually, as well as our group, making sure that we’re ready to go the rest of the way,” offensive coordinator Kevin O'Connell said Thursday when asked about the offense's recent discordance. ”It comes down to the little details sometimes, and that's where leadership and poise come in, not only our quarterback, but our whole group."

Goff's inconsistency often appears to be among the biggest factors holding back the Rams from recapturing the form of their Super Bowl season in 2018-19, particularly since the Rams have built one of the NFL's top defenses this year. The Rams remain wholeheartedly committed to Goff, both because of his massive contract — which kicks in next year — and because he already has shown the ability to be an elite NFL quarterback when he's clicking.

“I think you know what it looks like when he’s playing at a high level,” McVay said.

Goff will face nearly optimal conditions for a bounce-back game Sunday at SoFi Stadium. The NFC West-leading Seahawks have the NFL's worst pass defense, and they might be without their two starting cornerbacks because of injury.

Goff has had several big games against Seattle in his career, racking up an average of 331.8 yards passing per game over the past four meetings. Moreover, Goff has always bounced back before, and the Rams expect him to do it again.

“Me and (Seahawks quarterback) Russell (Wilson) have had our fair share of shootouts," Goff said. "If that’s the case, we’ll be ready. But I’ve got a lot of faith in our defense, and I know that they do, too.”

NOTES: RB Darrell Henderson is expected to play Sunday. He returned to practice Thursday after sitting out Wednesday with a thigh injury from the Rams' game at Miami. “The big man is feeling good,” McVay said. “He'll be ready to go (against Seattle) unless there's something that happens between (now and) game time.” ... McVay also expects WR Cooper Kupp to play Sunday. Kupp is nursing injuries to his wrist and an oblique muscle. ... LG David Edwards returned to practice Thursday, while LT Andrew Whitworth (back) and LB Leonard Floyd (knee) sat out. McVay is confident all three will play Sunday.