Stymied Seahawks: Seattle baffled by woes in loss to Giants 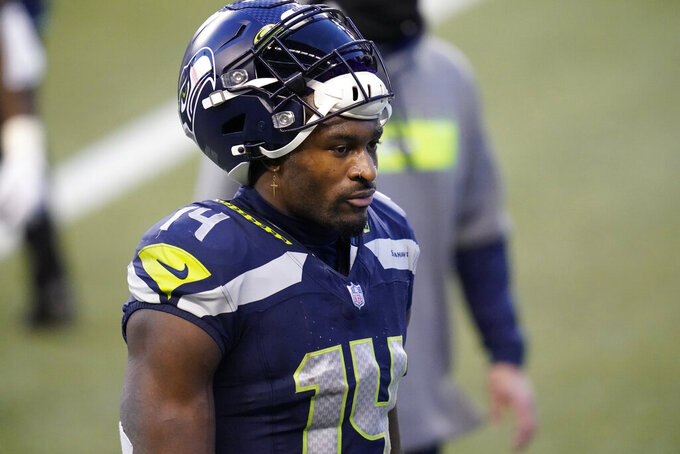 SEATTLE (AP) — The situation was completely familiar for Russell Wilson and the Seattle Seahawks. Trailing late, with the ball, needing a touchdown to win.

The eventual outcome was far different. But then, seemingly everything about the Seahawks' performance on Sunday was different than expected.

There were no late heroics for Wilson. Instead it was a long list of head-scratching questions about what went wrong in a 17-12 loss to the New York Giants.

The third-best scoring offense in the league was brought to a halt by New York’s defense. Wilson was indecisive and hesitant, taking sacks when he shouldn’t. The run game was abandoned too soon, with Seattle running backs carrying the ball just 15 times versus 43 pass attempts.

Seattle took its first home loss of the season and threw the NFC West race into some turmoil. Instead of capitalizing on the softest portion of their schedule, the Seahawks fell back into a tie with the Los Angeles Rams on top of the division.

“I’m really surprised that this is how we looked against this game plan that they had,” Seattle coach Pete Carroll said. “I thought we could do a lot of stuff that just didn’t happen for us. I need to see why and really break it down.”

Seattle was held to 327 total yards by the Giants, the fourth straight game the Seahawks failed to reach 350. Making it more difficult was the lack of big chunk yardage that made Seattle’s offense so potent earlier in the season. The longest offensive play was Chris Carson’s 28-yard touchdown reception in the fourth quarter that pulled the Seahawks within 17-12.

Wilson finished 27 of 43 for 263 yards. He threw an interception that bounced off Carson’s hands and into the arms of Darnay Holmes. Wilson also muffed a snap that turned into a fumble in the first half and had several other dangerous throws that nearly became turnovers.

Most concerning were the sacks and hits Wilson took. Earlier in the season, Wilson was decisive and confident with his decisions. Against the Giants, he appeared hesitant, often holding back from letting go of a pass and exposing himself to extra time in the pocket — and more hits.

Wilson was sacked five times, four for them for losses of 8 yards or more. He also had an intentional grounding penalty late in the first half that lost 11 yards and cost Seattle a chance at points.

The Giants were credited with 10 QB hits.

“They’re a good defense, to be honest with you. They’ve done a good job, they’re coached well,” Wilson said. “They had some things covered up and they kind of tried to keep everything in front. We didn’t really have anything down the field or anything like that.”

Even with the offensive struggles, Seattle was still in position to pull out a victory. Wilson took possession with 1:48 left at his 20 needing a touchdown to win. It’s a similar scenario to what Seattle faced in its Week 5 win over Minnesota.

The Seahawks reached the Giants 46, but after a pair of incompletions, Wilson took his worst sack of the day. Leonard Williams came free and instead of Wilson getting rid of the ball, he was thrown to the turf for an 8-yard loss. Seattle used its final timeout and a fourth-and-18 desperation heave was knocked down.

“We never got moving. It just isn’t like that; none of us have seen us play like that,” Carroll said.

While the lack of offense was the major culprit, the Seahawks were also disappointed in their defense, especially in the third quarter when the Giants took a 14-5 lead. New York had just 33 yards rushing at halftime, but Wayne Gallman’s 60-yard run in the third quarter changed the momentum. The Giants rushed for 131 yards in the quarter and 157 in the second half.

“We weren’t doing our job,” Seattle safety Jamal Adams said. “When you don’t do your job on defense and they’re running the ball like the way they’re running it, very efficient, you know you’re going to have a long day. So we didn’t do our job.”