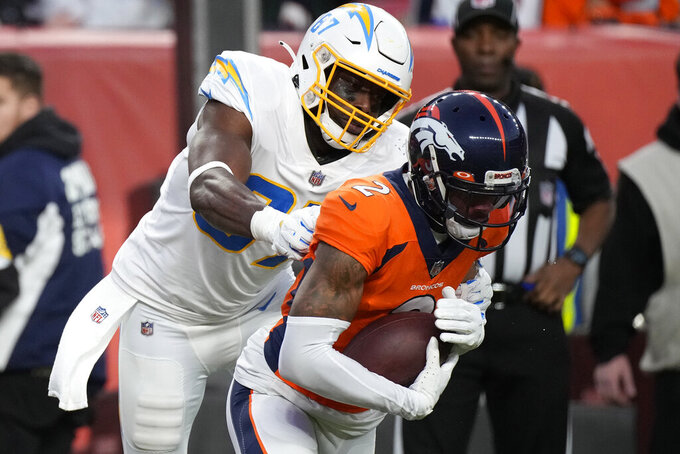 While acknowledging “it's a pretty good accomplishment for me and this team,” Surtain clearly had taken to heart safety Justin Simmons' admonition to put aside the team's big win over the Chargers last weekend and go all-in so they might come out of Arrowhead Stadium with a rare win Sunday night.

The Chiefs (7-4) are favored to beat the Broncos (6-5) for the 12th consecutive time, but if Denver can beat quarterback Patrick Mahomes for the first time in eight tries, they'll return home atop the AFC West, a view they haven't had in December since 2015.

Upending the Chiefs was top of mind for new general manager George Paton when he selected the speedy, 6-foot-2, 202-pound cornerback from Alabama with the ninth overall pick in the draft last April.

Paton bypassed a bunch of quarterbacks and do-everything linebacker Micah Parsons, but he explained that Surtain was his target all along and he talked about how he got to know his father, Pat Surtain Sr., who played 11 years in the NFL in Miami and Kansas City, when both were working for the Dolphins.

It was the son's speed-size combination that really caught his eye. It's so uncommon in cornerbacks, who are usually fast or long but not both.

Surtain might prove just the antidote to Kansas City's speedy receiver Tyreek Hill or to the Chiefs' physical tight end Travis Kelce, both of whom have long tormented Denver's defenses.

About the only time Surtain's face brightened up at the podium Wednesday was when he envisioned facing all that talent directed by Mahomes.

“Yeah, they got speed like crazy,” Surtain said. “Like, world class speed. We know what we’re going against, we’re going to put our track shoes on.”

If Kelce lines up outside, Surtain can keep up with him and has the reach to negate Kelce's notorious hand-fighting at the top of his route that allows him to so often create just enough space for Mahomes to fit the pass in.

“I think using my speed and my length would be an advantage to me," in facing Kelce, Surtain said.

The Broncos might consider putting Surtain back in the slot where he started out the season so he can match up more often against Kelce, but they'd have to make sure Hill doesn't make them pay by getting open deep.

No matter how many times he gets to cover Kelce on Sunday night, Surtain is looking forward to the challenge, he said.

“Yeah, I think it would be a fun matchup, for sure,” Surtain said.

He said the key is “just minimizing his big-play potential, rerouting him, throwing the timing off with him and the quarterback, putting hands on him early."

That's something the Broncos have had a very hard time doing ever since the Chiefs surpassed them as the cream of the division in 2016.

Surtain has been everything the front office and coaching staff envisioned. He's broken up or intercepted 11 passes so far, including a pair of fourth-quarter picks of Justin Herbert in the Broncos' 28-13 win over the Chargers.

He picked off Herbert in the end zone early in the fourth quarter and sealed the win by returning his second interception 70 yards for a touchdown.

Surtain reached a top speed of 22.07 mph on his pick-6, according to Next Gen Stats, the fastest by a defensive back with the ball in his hands in the past five years.

That made him the first rookie since Marcus Peters in 2015 for Kansas City to have multiple interceptions, including a pick-6, in the same game.