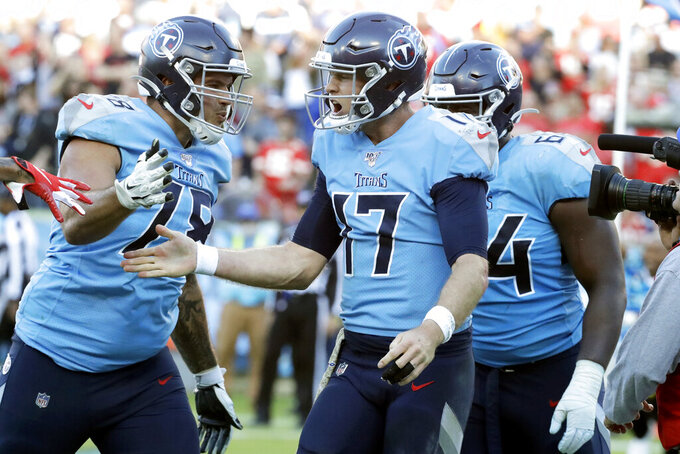 DENVER (AP) — Just like Denver's Garett Bolles, Tennessee's Taylor Lewan has been dogged by penalties all season, and the Titans' struggling left tackle did just what the Broncos' grabby left tackle did earlier this season: he went on a postgame rant about the flags in the locker room after a penalty-filled performance.

The difference was Lewan went off on himself instead of complaining about the calls.

"Before we even start this whole thing, any penalties are a (expletive) problem," Lewan began. "I am 100 percent at issue with that. It is not intentional. I do not mean to do it. My intentions are good. I am just trying to finish. And it is killing the team. ... I am completely screwing the team with the amount of penalties I have in these last, what, six games? ... It's horrible. I cannot get penalties. I am sorry. There is no need to ask me about it because I know I am an absolute liability when it comes to penalties."

Contrast that with what Bolles said after Denver's 16-14 loss to the Chicago Bears in Week 2, when he was flagged four times for holding and needed a police escort as he trudged off the field to catcalls from a frustrated fan base:

"It was frustrating. I've built a reputation for myself in this league of holding. I disagree with it, to be honest," Bolles said, adding he takes solace in knowing his coaches, including Hall of Famer Mike Munchak, his teammates and the front office all have his back. "I'm going to turn this around. That was just unfortunate that they keep coming after me."

Suggesting he was the victim in his career-long penalty problem — Bolles now has 42 infractions in 41 career starts — prompted Mark Schlereth, Orlando Franklin and Tyler Polumbus, three former Broncos O-linemen who are now broadcasters, to scold Bolles for either an astonishing lack of self-awareness or a disturbing lack of accountability.

And it led general manager John Elway, who drafted Bolles over Wisconsin's Ryan Ramczyk in the first round of the 2017 draft, to ask if Bolles even knew what constituted holding.

Lewan has his troubles. He was suspended by the NFL for the first month of the season for violating the league's policy on performance-enhancing substances and since his return, he's been whistled a team-high nine times in just six games — four false starts, three holds, one facemask and one unnecessary roughness.

Bolles has been flagged for 10 holds and one false start, but any Broncos plans to bench their fundamentally unsound tackle have been scuttled this season with right tackle Ja'Wuan James playing just 32 snaps because of a balky knee after signing a four-year contract in free agency that includes $32 million in guarantees.

Former coach Vance Joseph and ex-offensive coordinator Munchak always stuck up for Bolles, and new coach Vic Fangio and his staff have, too, always mentioning that Bolles came to football later in life after starring in lacrosse and other sports.

But that message, coming after a pair of penalties in a 24-19 win over the Cleveland Browns, was followed with this: "He didn't play too bad yesterday. Again, he's a young player still, especially in light of his limited background in football before he got here. It's our job to maximize and make sure we're doing everything possible to develop him. If the guy has talent, we wanted to maximize every opportunity to develop it."

With swing tackle Elijah Wilkinson already filling in at right tackle for James, Fangio has steadfastly declined to even sit Bolles for a series or two if for no other reason than to see if that won't make him match the team's trust in him with a commitment to improve.

Instead, Bolles keeps starting and he keeps getting flagged, which often follows with him throwing his arms up in protest of the officials, then a dismissive wave as if they're just picking on him again.

Bolles' infractions have cost the Broncos some 500 yards in field position over his career, and it's really come down to this: if Munchak can't fix his game, no one can.

Russell Wilson made the most of his third chance in overtime Monday night, leading Seattle on the game-winning field goal drive that handed San Francisco its first loss of the season and improved his record in night games to 25-5-1, best all-time.

The 49ers (8-1) stopped Seattle's first drive in OT when Dre Greenlaw intercepted Wilson's pass inside the 5-yard line and returned it to midfield. But fill-in kicker Chase McLaughlin, signed last week when Robbie Gould injured his quadriceps in practice, missed badly to the left from 47 yards out after making all three tries in regulation, including a 47-yarder with 1 second remaining to tie it.

The Niners stopped Wilson on third-and-2 and got the ball back at their 20 with 1:45 left in overtime, but Jimmy Garoppolo threw three incompletions, burning just 14 seconds of clock time. The punt burned another 11, so Wilson got the ball back at his 36. He apologized to his teammates for letting them down before and implored them to go finish the job and capitalize on their third opportunity.

They did, with kicker Jason Myers hitting from 42 yards out after Wilson's 18-yard scramble on third-and-3.

The Cowboys didn't give themselves a fair shake by having speedy Tavon Austin call for a fair catch in the closing seconds of their 28-24 loss to the Minnesota Vikings. There wasn't a defender within 15 yards and there was an open lane to the end zone down the left sideline when Austin signaled for the fair catch at midfield. The Cowboys ended up doing nothing with the 17 seconds they saved by not taking time off during a runback, which would have at the very least gotten them in better position for a "Hail Mary" into the end zone.