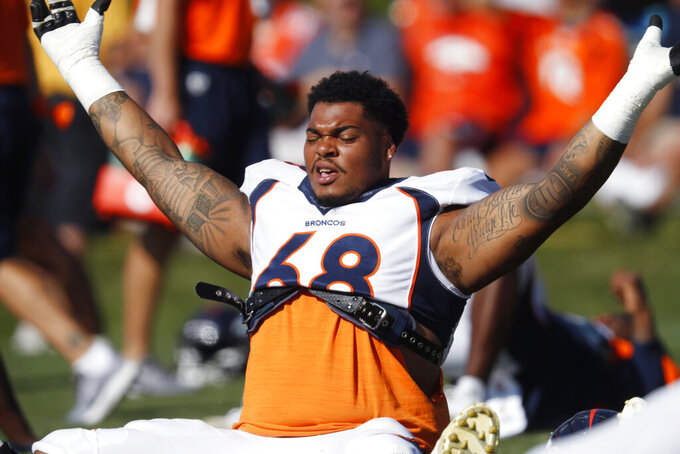 ENGLEWOOD, Colo. (AP) — By his conservative count, Broncos rookie receiver Juwann Winfree viewed his game-winning tip and toe-drag touchdown against Atlanta in the Hall of Fame Game about 100 times.

Granted, it was one catch in a preseason game. But that one reception told Winfree plenty — he could hold his own on this level after ACL and ankle injuries limited his playing time at the University of Colorado.

"I saw what's possible," Winfree said Monday after a practice that featured a skirmish between wideouts Courtland Sutton and Emmanuel Sanders. "It's possible I can help contribute and possible I can do this at the highest level. That catch lets me know I do belong here."

The acrobatic catch was the picture of concentration as rookie QB Brett Rypien's pass was batted into the air by a Falcons defensive back in the end zone. Winfree spun around to track it and hauled it in while dragging his feet with 1:26 remaining to give Denver a 14-10 win in the NFL's preseason opener.

That play illustrates why Pro Bowl cornerback Chris Harris Jr. stays on Winfree in practice. Harris sees the big-play potential in the receiver who wears No. 15.

"He's just strong. He's a strong rookie," Harris said. "You don't see a lot of rookies like that."

Being a rookie, though, Winfree may be prone to lapses in concentration. Harris has that covered.

"Some days they might want to take it in and don't want to bring that full effort in," Harris said. "But I am definitely staying on '15' because he has a lot of talent. He can definitely help us."

Denver thought highly enough of Winfree to trade up in the sixth round to take him. That caught Winfree a little by surprise; he was hearing the Vikings would use one of their sixth-round picks on him.

"That's huge for me the Broncos had that much confidence in me," Winfree said. "Every time I'm out here, I think about that and try to prove to them why I should be out here."

His college career took a winding route. After playing sparingly at Maryland as a freshman, Winfree spent a year at Coffeyville Community College in Kansas before showing up at Colorado.

Then, the injuries hit. A torn ACL during camp in 2016 sidelined him for the season. Last season, he suffered a high ankle sprain at Nebraska that kept him out for a month.

In two seasons with the Buffaloes, the 6-foot-3, 215-pound Winfree caught 49 passes for 649 yards and four touchdowns. His best game was on Nov. 11, 2017, against Southern California when he caught five passes for 163 yards and two scores.

The missed games due to injuries were "super frustrating," he said. "The more games, the more experience, you feel more comfortable.

"I've got to catch up," Winfree added. "But my whole life has kind of been catching up. Now I'm here trying to catch up with the veterans."

The Broncos have quite a stable of receivers, with Sanders, Sutton and DaeSean Hamilton the locks to make the team. Winfree is vying for a spot with the likes of Tim Patrick, River Cracraft, Steven Dunbar Jr., Trinity Benson, Brendan Langley, Kelvin McKnight and Nick Williams.

"I'm a playmaker," said Winfree, who dealt with a leg ailment early in camp. "Wherever I'm at, special teams, receiver, blocking, I'm just trying to make plays. You're going to get a selfless player."

Sometimes, the moment seems almost surreal for Winfree. Like catching passes from quarterback Joe Flacco. Or hauling in a reception while Harris was covering him (it happened during organized training activities). Or that winning reception in the inaugural preseason game.