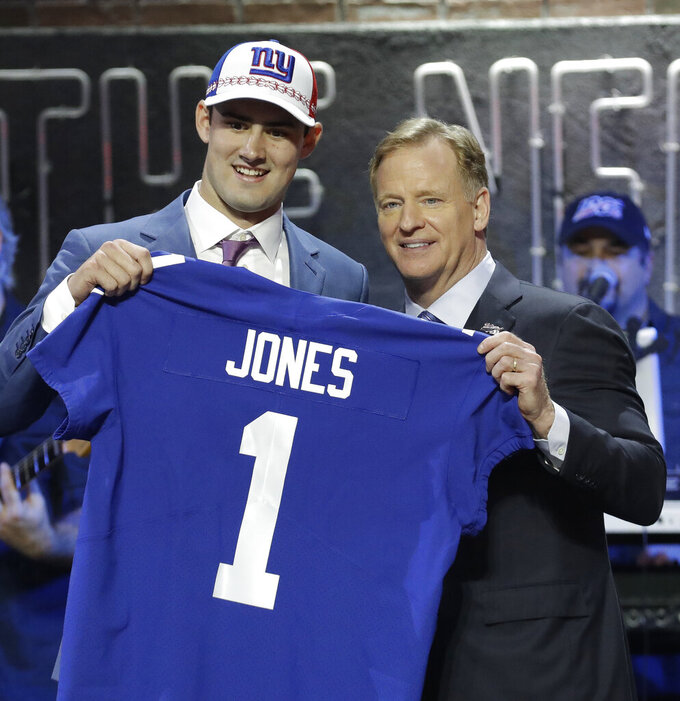 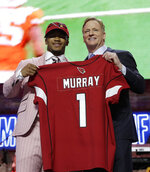 Five picks after the draft opened Thursday night with the Arizona Cardinals selecting Murray, the New York Giants took Jones earlier than most prognosticators expected and ahead of generally higher-rated Dwayne Haskins of Ohio State.

Haskins went No. 15 to the Washington Redskins.

It's the sixth consecutive draft in which at least two quarterbacks were taken in the first round.

Defense was the theme of the first round, and few projected a quarterback other than Murray would go before the middle of the round.

Three were gone by then. Missouri's Drew Lock was considered a possible first-round pick but was not selected.

In Jones, Giants general manager Dave Gettleman gets another quarterback developed by David Cutcliffe. Cutcliffe was Giants starter Eli Manning's coach at Mississippi, and before that he was Peyton Manning's offensive coordinator at Tennessee.

"I was fortunate to go to Duke and play for coach 'Cut' and have him have the connection to Peyton and Eli and getting to know them and learn from them a little bit," Jones said. "I'm looking forward to learning from (Eli) in New York."

Jones started all 12 of the Blue Devils' games as a redshirt freshman in 2016. His production dropped as a sophomore, and he missed two games last season with a broken clavicle, but he still threw for 2,700 yards and 22 touchdowns before being named MVP of the Senior Bowl.

"I think I was impressed with his presence, who he was, and I'm looking forward to learning from him and the coaching staff," Jones said. "I'm excited for the opportunity to be in New York."

Murray, though undersized, would appear a natural fit for the wide-open offense new Cardinals coach Kliff Kingsbury is bringing from Texas Tech. Murray is the first man drafted in the first rounds of both the Major League Baseball and NFL drafts.

"I'm just so proud of Kyler and the way he's handled this entire process," Oklahoma coach Lincoln Riley said. "He's gone through something that no one has ever gone through with the amount of scrutiny in different sports, the hype that he's had since he was such a young kid. To see him get to this moment as the No. 1 pick, that's been his dream. To see him live this part of it out is awesome."

Haskins became the first Big Ten quarterback since Penn State's Kerry Collins in 1995 to be taken in the opening round.