After years of losing, 49ers enter bye week with 3-0 record 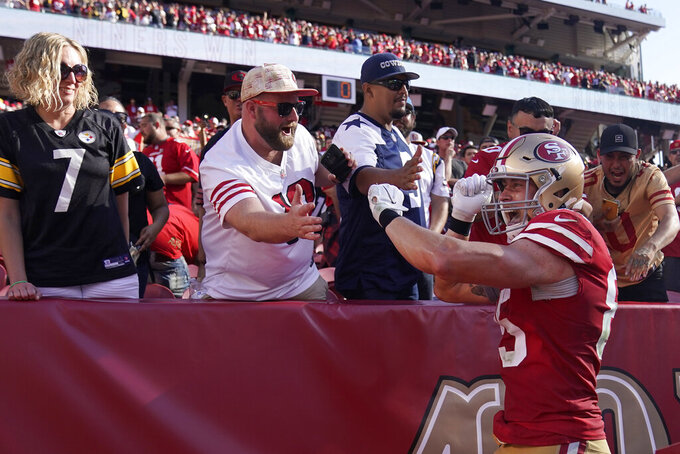 But for a franchise that has left followers looking ahead to next season, speculating about coaching changes and studying mock drafts starting in October the past four years, just being in the mix is accomplishment enough.

"It's been so long since we've felt like this year. I'm definitely enjoying it," said 13th-year left tackle Joe Staley, the team's longest-tenured player. "But I also know it's just Week 3. We just completed Week 3. There's such a long season to go. It's kind of a bummer we have our bye week so early."

The 49ers (3-0) head into their week off as one of only seven teams with perfect records so far, having squeaked out ugly victories at Tampa Bay and in the home opener against Pittsburgh around a dominating performance in Cincinnati.

This is the first time San Francisco has won its opening three games since 1998 and it's a far cry from the way the past four seasons have gone since coach Jim Harbaugh left following three straight trips to the NFL title game and an 8-8 record from 2011-14.

It took until Nov. 8 for the Niners to win their third game in 2015 under coach Jim Tomsula, they never got there during a 2-14 campaign under Chip Kelly the following year, and they didn't celebrate a third victory in coach Kyle Shanahan's first two years until December.

"When you lose a lot, which we have over the last few years, losing can be contagious and even though you want to block it out, there's somewhere in there like, 'Hey, we can't let this happen again,'" Shanahan said. "When bad things happen, that feeling does come up. I thought it was obvious to our team, which I feel just watching them and being around them is the opposite feeling. The worse it's going, the more guys still believe that we're going to win."

Never was that the case more than during the 24-20 win over Pittsburgh this past week when the Niners overcame five turnovers, including three in the red zone, to win the game on a late TD pass from Jimmy Garoppolo to Dante Pettis.

Instead of taking a fatalistic attitude that this wasn't their day like may have happened the past two years, the players relished the challenge they created and took advantage of a late forced fumble to set up the game-winning score.

"It's a mindset that we have in that locker room," Garoppolo said. "It's a great group of guys, great coaches, and I think it starts from the top down. We know what we have, and we just have to go prove it on the field now."

That Garoppolo was in position to throw the game-winning TD pass at the end of Week 3 was perhaps the biggest difference from a year ago. He tore his ACL in the third game of 2018 at Kansas City, bringing an end to the optimism the team had to open the season.

Garoppolo is back healthy again and after struggling in the opener, he has played well the past two weeks. He picked apart an overmatched Cincinnati defense in a 41-17 victory in Week 2 and then stood tall under heavy pressure from the blitzing Steelers to make enough big plays in the home opener.

Those types of performances are why the Niners rewarded him with a $137.5 million, five-year contract after he won the final five games in 2017 following a midseason trade from New England.

The other major difference is on the defensive side of the ball where the additions of edge rushers Dee Ford and Nick Bosa have turned a defense that couldn't create turnovers into an extremely disruptive one this season.

San Francisco has gotten consistent pressure on the quarterback, leading to bad throws and bad decisions and seven turnovers the first three weeks, matching the NFL record-low the team set for all of 2018.

That defense provided two pick-6s in the season opener to beat the Bucs and then set up two second-half touchdowns with takeaways against the Steelers. Then with Pittsburgh taking over with a chance to drive for the winning score, Mason Rudolph was pressured into an incomplete pass on first down, was forced to scramble on second, took a sack on third and had no time before throwing an incompletion on fourth down to end comeback attempt.

"Time and time again, we saw these close games where we didn't make the play at the end of the game, or we ended up losing by three or by one," fullback Kyle Juszczyk said. "So, to be on the other end of that was huge."