Bears hampered by same offensive issues in loss to Vikings 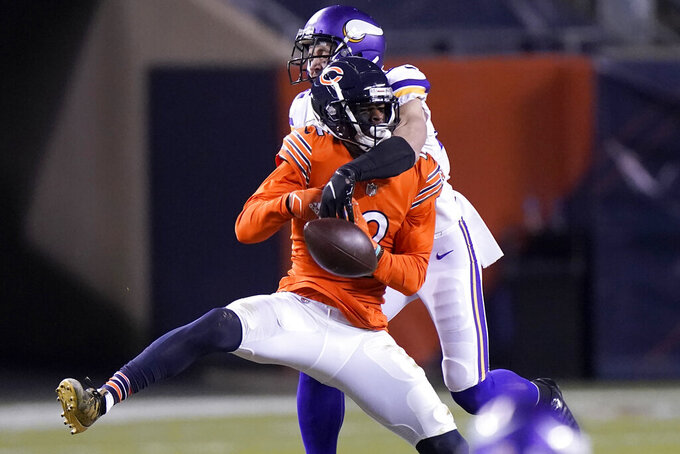 CHICAGO (AP) — The Chicago Bears changed play-callers, and nothing changed.

With offensive coordinator Bill Lazor calling the shots for the first time all season, the Bears managed just 149 yards and failed to score an offensive touchdown in a 19-13 loss to the Minnesota Vikings on Monday night.

Coach Matt Nagy handed the keys to Lazor this week in an effort to spark a slumping team ahead of a key NFC North matchup. But the Bears (5-5) experienced many of their usual issues in their fourth straight loss, topped by a banged-up offensive line that has made it nearly impossible for the offense to get into any sort of rhythm.

Next up is the bye week and some self-reflection before a trip to Green Bay to face the division-leading Packers.

“Obviously, it was repetitive today. It was still happening,” Nagy said. “So not only for the players' health right now, but for us as a coaching staff, we need to make sure that we’re really, honestly going back now and saying, ‘OK, you know, what’s going on and where are we at now that we have time to really see it?’”

Playing without David Montgomery because of a concussion, the NFL's worst rushing attack finished with 41 yards on 17 carries. Nick Foles was carted off the field after he was thrown down on an incomplete pass with 37 seconds left, finishing 15 of 26 for a season-low 106 yards and an interception.

Foles was being checked out after the game, but Nagy said it was a leg or hip injury.

Even with the trouble on offense, the Bears took a 13-7 lead on Cordarrelle Patterson's franchise-record 104-yard return on the second-half kickoff. It was Patterson's eighth career kickoff return for a touchdown, tying Josh Cribbs and Leon Washington for the modern-day NFL record.

Chicago then forced Minnesota to punt, but Dwayne Harris muffed the return. After Dan Bailey kicked a 37-yard field goal for the Vikings (4-5), the Bears went three-and-out on their next four possessions. They didn't get another first down until Foles found Patterson for a 10-yard gain with about five minutes left.

By that point, the Vikings had taken a 19-13 lead on Kirk Cousins' 6-yard touchdown pass to Adam Thielen. The Bears gained just 32 yards in the second half against the NFL's 29th-ranked defense heading into the weekend.

“Offense, we've just got to step up,” said Patterson, who had a team-high 30 yards rushing on 12 carries. “We're not good enough right now, everyone sees that. It's no secret.”

After Patterson's first-down catch in the fourth, the Bears drove to the Vikings 31. But Allen Robinson lost 4 yards on a reception and Foles threw incomplete on fourth down.

Chicago got the ball back again in the final minute, but stalled once again. Tyler Bray threw incomplete on fourth down while looking for rookie tight end Cole Kmet.

“Our defense and special teams are outperforming us on a wide scale,” offensive lineman Charles Leno Jr. said. “We’ve got to go back to the drawing board. Good thing we’ve got a bye so we can do a lot of self-scouting and digging on what we need to do better. And I’m just talking about me, for myself. I can only control what I can control, but also as an offense, we clearly know that we have to be better.”