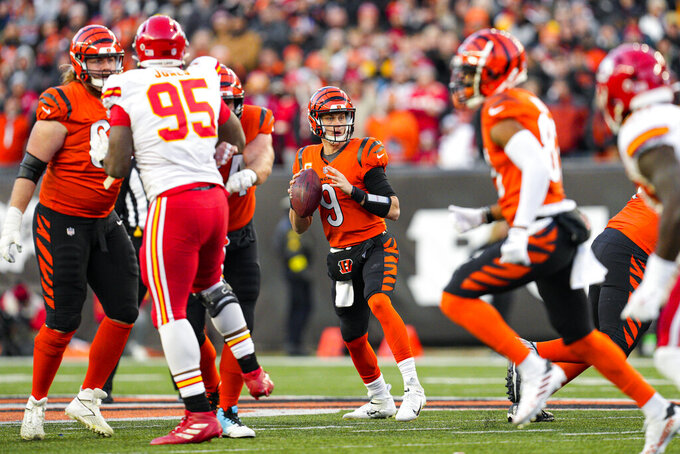 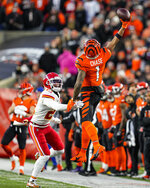 TURNOVER DIFFERENTIAL: Browns minus-5, Bengals plus-2.

BROWNS PLAYER TO WATCH: QB Deshaun Watson was much more rusty than expected in his Cleveland debut after serving an 11-game suspension. Watson was inaccurate and out of rhythm while posting a career-worst 54.3 passer rating. It was his first regular-season game in 700 days.

BENGALS PLAYER TO WATCH: WR Ja’Marr Chase returned last week after missing four games with a hairline fracture of his hip. The AP Offensive Rookie of the Year had seven catches for 97 yards, including two grabs that kept the Bengals’ final drive going so they could run out the clock.

KEY MATCHUP: Bengals receivers vs. Browns secondary. Chase got the attention of Cleveland's defensive backs with some negative comments about them on a podcast this summer. He missed the first matchup this season, and had one of his worst games as a rookie last season against the Browns.

INJURIES: Browns WR Amari Cooper was injured in practice Thursday and is questionable. ... Browns TE David Njoku is back after missing one game with a knee injury. ... LS Sione Takitaki (knee) tore a knee ligament last week, the third Browns linebacker to sustain a season-ending injury. ... Browns WR Anthony Schwartz is in concussion protocol. ... Bengals RB Joe Mixon is practicing this week after missing two games with a concussion. ... Bengals TE Hayden Hurst, a key target for Burrow this season, suffered a right calf injury last week; his status for Sunday is unclear. ... The team announced that S Brandon Wilson will remain on the reserve/physically unable to perform list. He was cleared to resume practicing on Nov. 14.

SERIES NOTES: Behind backup quarterback Jacoby Brissett, the Browns stunned the Bengals on Halloween. Cleveland has won five straight in the series and eight of the past nine, including regular-season sweeps in 2020 and '21. ... The Bengals last beat the Browns on Dec. 29, 2019, at Cincinnati with Andy Dalton at quarterback. The Bengals won seven straight in the series from 2014-17. ... The Browns won the first game between the two teams 30-27 on Oct. 11, 1970.

STATS AND STUFF: Watson needs to improve quickly or the Browns' already-thin playoff hopes will vanish. The three-time Pro Bowler led the offense to two field goals, but Cleveland scored two defensive TDs and returned a punt for six. ... Watson threw three TD passes in a loss to the Bengals with Houston in 2020. ... The Browns have owned Bengals quarterback Joe Burrow, going 4-0 and sacking him 17 times over the past two seasons. ... Browns coach Kevin Stefanski is 5-0 against the Bengals. ... Browns All-Pro DE Myles Garrett has nine sacks in eight games against Cincinnati, six in four games vs. Burrow. ... Cooper had 131 yards receiving and a TD against the Bengals in October. ... Browns RB Nick Chubb is second in the NFL with 1,119 yards rushing and 12 TDs. Chubb also leads the league with 358 yards in the fourth quarter. Chubb had 137 yards and two TDs in Cleveland's 41-16 blowout in Cincinnati last season. ... The Browns rushed for 172 yards in their win over the Bengals ... Browns WR Donovan Peoples-Jones had a 76-yard TD punt return last week, the first for the team since 2015. ... The Browns forced a season-high four turnovers last week. ... CB Denzel Ward had a 4-yard fumble return for a score. Last season, he returned a Burrow interception 99 yards. ... The Bengals have won four straight since losing to the Browns and eight of 10 since dropping their first two games. ... Burrow is tied for second among NFL quarterbacks with 25 passing TDs and is second with 3,446 passing yards behind Kansas City's Patrick Mahomes. ... Burrow completed 25 of 31 passes last week in beating Mahomes for the third straight time in a rematch of last season's AFC title game. ... Burrow has 12 TD passes of 50 yards or more in his past 15 regular-season games, the most by any QB in that span and tying him with Hall of Famers Dan Marino and Fran Tarkenton for the most in his first three seasons. ... Burrow has 15 games of 300 or more passing yards, two shy of Carson Palmer (17) for fourth place on the Bengals' career list. Andy Dalton (28), Boomer Esiason (23), and Ken Anderson (19) hold the top three spots on that list. ... Cincinnati's offensive line has only allowed six sacks in the past four games. ... RB Samaje Perine had a career-best 155 yards from scrimmage last week. ... The Bengals waived P Kevin Huber this week after 14 seasons with the team and later re-signed him to the practice squad. Drue Chrisman was promoted from the practice squad.

FANTASY TIP: Cooper may get extra attention from the Bengals after his big performance in October. If that happens, Peoples-Jones could get more single coverage and might get behind Cincinnati's secondary for a deep ball or two.