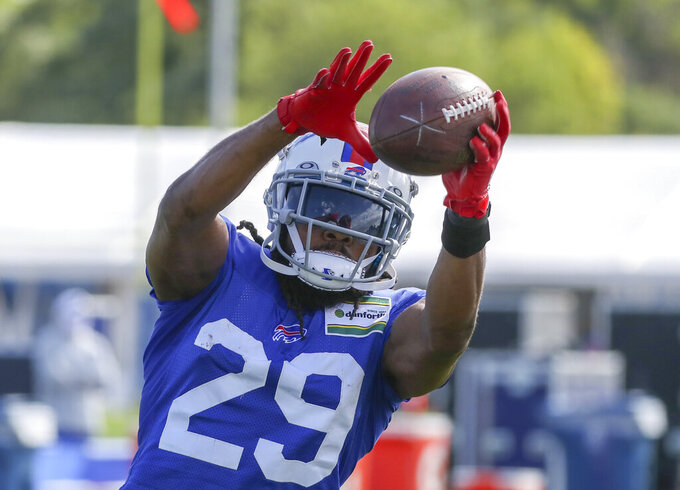 FILE - In this Aug. 18, 2020, file photo, Buffalo Bills cornerback Josh Norman (29) catches a pass during a fumble drill on the second day of training camp in Orchard Park, N.Y., Tuesday, Aug. 18, 2020. Buffalo Bills cornerback Josh Norman is out indefinitely after hurting his left hamstring in practice.C oach Sean McDermott on Friday, Aug. 21, 2020, couldn’t provide a timetable on time Norman will miss, saying the team is still determining the severity of the injury.(James P. McCoy/Buffalo News via AP, Pool)

“I do think we’re not the only ones,” Gase said. “I think there’s a lot of teams in the league right now that are dealing with all kinds of injuries.”

He's right. Teams all over the league were sent scrambling during camp.

“We just had to figure out a way to kind of maneuver around practice, schedule-wise, and get everything we can out of these days,” Gase said. “Whether it’s a shorter practice or different kinds of situations or more individual (drills) or a walkthrough, whatever we’ve got to do to kind of get us ready, and then just keep trying to get healthy.”

And, that’s nothing new in the NFL, of course. Certainly not during training camp when players are going hard to make the roster as the start of the regular season rolls closer.

“That’s why you want to take it to the fine line, but at the same time, you don’t want to take that aggressive nature away," Washington coach Ron Rivera said. "You want to take the techniques that they’re working on and say, ‘OK, do a flyby or do a roll-off or a peel-off, something like that.’ And the next thing you know, you’re in the game and they don’t know how to react.

“That’s the fine line that we have to deal with as coaches.”

Teams were also limited to 80 players in camp instead of the usual 90, leaving fewer “practice bodies” on the field, theoretically making it easier for clubs to manage the safety protocols during the coronavirus pandemic.

Among some of the more prominent injuries this summer:

Defensive tackle Gerald McCoy signed a three-year contract with Dallas in the offseason, but ruptured his quadriceps in practice. He was released a few days later.

Los Angeles Chargers safety Derwin James tore the meniscus in his right knee and is out for the season. Giants linebacker David Mayo suffered the same injury to his left knee.

“Yeah, you get frustrated a little bit when it happens, but it’s just happened too much to me that, over your career as a coach, it’s just part of the game,” 49ers coach Kyle Shanahan said. “You can’t sit there and dwell on it. You try to look at, was anything done wrong or anything like that? Not at all.”

Of course, this year has been more unusual to navigate because of the pandemic, which cut out the entire offseason program — leaving players to try to coordinate workout routines in makeshift garage and basement gyms before reporting for camp. And leaving them in varying degrees of football shape.

“Some guys probably didn’t have access to anything," Gase said, "which is probably why you see quite a few injuries.”

Browns left guard Joel Bitonio credited the NFLPA — including teammate and union president JC Tretter — for stressing the need for a ramp-up period for teams before camp began. Still, Cleveland has had its share of what Bitonio calls “unlucky injuries” this summer, including rookie starting safety Grant Delpit being lost for the year with a torn Achilles tendon and nickel back Kevin Johnson suffering a lacerated liver.

And Tretter hurt his knee.

“It's the soft tissue injuries and those things that you are trying to prevent with the ramp-up period," Bitonio said. "Some of those football injuries just happen. It's an unfortunate part of the business.”

Teams were also, well, hamstrung, by the COVID-19 protocols they had to follow to add a player to the roster. It wasn't as simple as calling a player, flying him in and getting him on the field that day or the next morning. Players had to undergo two days of testing — and come up negative on both — before they were even allowed to sign.

“It’s kind of a weird year for everybody,” said quarterback Trevor Siemian, who went through the process before signing with Tennessee.

That will certainly be something to monitor as the regular season begins and teams deal with injuries and potential replacements.

Either way, players and coaches still refuse to use injuries — or this unusual offseason and summer — as an excuse for what ultimately happens on the field.

“It was different, but that’s the card we were dealt,” Minnesota right tackle Brian O'Neill said. "At the end of the day, nobody really cares about how you felt about it or how you were able to adjust, just if it translates into wins on Sunday or high performance on Sunday. And hopefully we’ll be able to do that.”