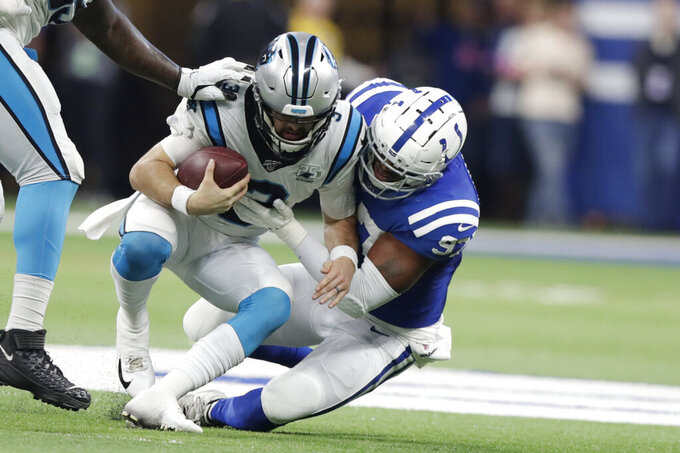 Carolina Panthers quarterback Will Grier (3) is sacked by Indianapolis Colts' Al-Quadin Muhammad (97) during the second half of an NFL football game, Sunday, Dec. 22, 2019, in Indianapolis. (AP Photo/Michael Conroy)

The second-year coach wanted his team focused, hungry and prepared. He expected his team to play hard. And he insisted if they just homed in, the Colts would respond.

On Sunday, with the playoffs out of reach, Indianapolis snapped a four-game losing streak in impressive fashion — completely dominating Carolina in a 38-6 victory.

“I don't think it had anything to do with speeches, I just think that's who our guys are," Reich said afterward. “It's good to get back on track. We know we left a lot out this year, but we've got one more week to prove it would mean a lot to get back to 8-8."

Reich has no doubt his team responding again next weekend at Jacksonville.

While the Jaguars (5-10) are a team in flux, perhaps more interested in draft positioning to build for the future, the Colts seem to be the exact opposite.

They have a young roster full of budding playmakers such as running back Marlon Mack, safety Khari Willis and running back/kick returner Nyheim Hines.

So what the Colts want most now is momentum and confidence heading into 2020. Sunday's victory was the first step.

“We’ve said all year long that if all three phases come out and we don’t beat ourselves we can be one deadly team," Leonard said. “I don't even know when our last win was, so it definitely feels great to get back out there and get a victory.''

And adding one more before heading home for a longer than expected offseason would be the perfect end to this roller-coaster season.

“It sure felt good, a complete win, we were really good in all three phases," Reich said. “So real credit to the guys for preparing all week, getting ready, playing together, playing for each other and proving that we can trust each other even in a situation like this."

The ground game. After struggling to get their runners on track the past several weeks, Indianapolis overwhelmed the Panthers defense. They ran for 218 yards, averaged 6.8 per carry, and nearly produced two 100-yard rushers for the second time this season. And Mack finally has his first 1,000-yard season.

The passing game. Reich wanted to get Hilton involved early and often Sunday. He wound up with three catches for 26 yards — both team highs. Indy's other outside receivers combined for three catches and 36 yards.

Hines. The second-year running back thrived on punt returns, shattering the franchise's single-game record for yards (195) and becoming the first player in team history to score two touchdowns in one game. Hines now has seven returns this season for 261 yards, an average of 37.3. The speedster could supplant the injured Chester Rogers as Indy's top returner next season.

QB Jacoby Brissett. He really didn't do anything wrong Sunday. But on a day everything else seemed to work, Brissett's numbers were, again, less than ordinary. He wound up 14 of 27 with 119 yards, no touchdowns and no turnovers. He also scored on a 1-yard run.

Willis left in the second half with a burner. But the bigger blow could be to Nelson, who entered the concussion protocol in the third quarter. Nelson has never missed a game but clearing the steps of the protocol in one week could be a real challenge.

8 — While the Colts would prefer to be contending for a playoff spot, they'd rather pick up win No. 8 than have a second losing season in three years.

After winning for only the second time in eight games, Reich continues to emphasize finishing the season with a consistent effort, consistent results and back-to-back wins.