Column: Sports hanging by the thread of the almighty dollar 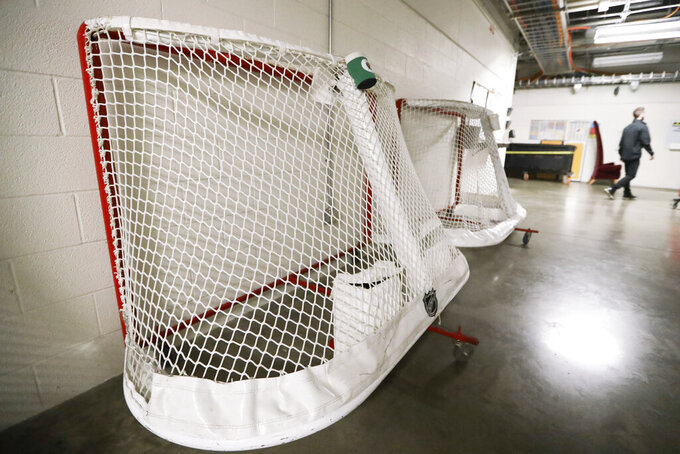 FILE - In this March 12, 2020, file photo, goals used by the NHL hockey club Nashville Predators are stored in a hallway in Bridgestone Arena in Nashville, Tenn. Time is running short for the NHL to start its season on Jan. 1. Various pandemic-related geographic and economic issues remain unresolved. (AP Photo/Mark Humphrey)

The games will go on, hanging by the thread of the almighty dollar.

Even as the coronavirus rages out of control over wide swaths of the country, and some facets of society are beginning to shut down again in hopes of stemming the deadly tide, there are no plans to shutter sports like they did back in March.

Too much money is at stake.

Everyone is all-in on this utterly joyless pursuit.

But it's easy to see why so many have tuned out these made-for-TV games.

The contests being played in largely empty stadiums and arenas, devoid of any atmosphere or excitement. The constantly changing lineups and scattershot rescheduling or canceling of games, often on a few hours notice. Teams forced to play in temporary, faraway homes because, well, we're in the midst of a worldwide pandemic that already has claimed a quarter of a million American lives.

Please welcome to the court ... your Tampa Bay Raptors?

Georgia basketball coach Tom Crean summed it up best when his team's season opener was canceled shortly before tipoff because of COVID-19.

"This season already was a surreal experience all around,” said Crean, whose team hasn't even played a game. “To all our fans, bear with us. It’s going to be this kind of year in college basketball.”

It's already been that kind of week for the Bulldogs.

On Monday, they learned that their second game of the season, set for this Sunday against Gardner-Webb, would have to be canceled because of a positive test within their opponent's program. On Tuesday, the Bulldogs hastily scheduled Florida A&M as a replacement game. Then, on Wednesday, they had to call off the opener against Columbus State.

Florida A&M — a team that wasn't even on Georgia's schedule a few days ago — is the new season opener.

Assuming nothing happens in the next couple of days.

Meanwhile, anyone planning to cap off Thanksgiving Day by watching the highly anticipated Baltimore-Pittsburgh NFL matchup in prime time had to make alternate plans — who's up for some Parcheesi? — after that game was first pushed back to Sunday, and then to Tuesday by an outbreak that put more than a dozen Ravens on the coronavirus reserve list.

MVP quarterback Lamar Jackson was among those stricken, casting a further pall over a season that feels more like the reality show "Survivor: NFL All Stars."

Keeping with that theme, winless Vanderbilt headed off to Missouri for what could be the first Power Five college football game to feature a female player.

Soccer goalkeeper Sarah Fuller was cleared to travel with the Commodores and poised to handle the kicking duties Saturday after a rash of COVID-19 issues swept through the special team unit.

“Let's make history,” Fuller said in a tweet that included a picture of her wearing a Commodores jersey and holding a football.

“She’s really good with a soccer ball, she seems to be pretty good with a football, so we’ll see,” Vanderbilt coach Derek Mason actually said.

While we're certainly pulling for Fuller's quixotic pursuit, the lunacy of a Southeastern Conference football team having to do some impromptu recruiting from the women's soccer program sums up the shameless exercise this season has become.

Forget about wins and losses.

The only thing that truly matters is whether the network checks clear.

That's certainly the case with the NBA, which not so long ago finished up its pandemic-delayed 2019-20 season by holding most of its playoffs before zero fans in a de facto high school gymnasium at Disney World.

While the bubble was an organizational marvel — and, most important, kept everyone healthy — the NBA has no plans of duplicating it as it rushes head-long into its next season with the pandemic firing on a larger, more terrifying scale than ever before.

The league conducted its draft last week, powered quickly through free agency, and is getting ready for teams to report to training camp next week — even though it hasn't even released a schedule for a season that is supposed to begin Dec. 22.

“It's going to be a wild year,” Atlanta Hawks general manager Travis Schlenk said. “We're going to have to adjust on the fly.”

You'll get no argument from the Toronto — uhh, make that the Tampa Bay Raptors.

Because of travel restrictions imposed by the Canadian government during the pandemic, the Raptors had to find an alternate home. They settled on Amalie Arena, home of the NHL Stanley Cup champion Tampa Bay Lightning (who have no idea when they'll get back on the ice, with time growing increasingly short for a planned New Year's Day start).

Well, at least the weather along the Gulf Coast will be a lot nicer than a Canadian winter.

“I was just happy that it was somewhere warm,” quipped Raptors star Fred VanVleet, who remained with the vagabond franchise after agreeing to a four-year, $85 million contract.

At some point, hopefully in the not-too-distant future given the progress being made on the vaccination front, sports will return to normal.

The stands will be packed. The schedules won't be changing on an hourly basis. The Raptors can return to their proper home.

Until then, it's hard to find any reason to cheer.