Goff, Rams cave to pass pressure in 28-17 loss to Dolphins 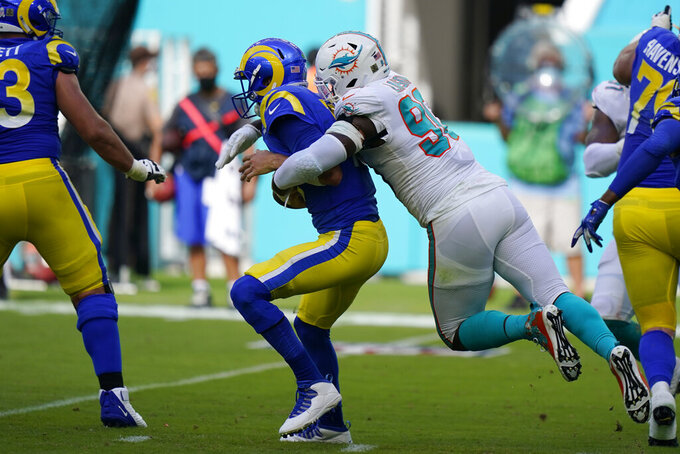 He watched it from the sideline, as the Rams tried — and failed — to counter the Miami Dolphins' relentless pressure.

Jared Goff was harried into four first-half turnovers, which led to three of the Dolphins' four touchdowns in a 28-17 win over the Rams on Sunday.

“They brought more than we could block,” said Brockers, who knows a thing or two about applying a pass rush. “I felt like it was 11 guys on the line of scrimmage, and once you snapped the ball, everybody was coming. I've never seen that before, that many times. It was a lot. It was a little crazy to look at.”

Goff's most costly turnover was a fumble on a sack that Miami linebacker Andrew Van Ginkel recovered and returned 78 yards for a score.

Goff also threw an interception to set up Tua Tagovailoa's first career touchdown pass, and fumbled on another sack to give the Dolphins the ball at the 1, which led to their final score as they took a 28-7 lead.

At that point, Goff and company began to adjust to the Dolphins' approach, but it was too late.

“That’s how they’re built, and we didn’t respond quickly enough or well enough,” Goff said. “And that starts with me.”

Rams coach Sean McVay said it actually started with him.

“We didn’t get it done, and that falls on my plate,” McVay said. “I have to do a much better job.”

With the Rams playing catch-up in the second half, they finished with a 326-yard advantage, the largest for a losing team in 18 years.

The Dolphins compensated with their two strip sacks, eight quarterback hits and five pass deflections by the front seven.

Goff went 35 for 61 for 355 yards and one score, with two interceptions and two lost fumbles. But the Rams' longest gain in 92 plays was 26 yards, and Goff never burned the Dolphins' blitz.

“They did a great job of getting after us early,” said receiver Robert Woods, who scored the Rams' first touchdown. "It was a great game plan. They set the tone.

“We missed out on some opportunities to capitalize on the blitzes — had a couple of batted balls. They were getting there right on time. If we connect, they're big plays for us.”

“It was definitely crazy,” Brockers said. “That was new; we rarely do that. It’s a moment of sudden change. But we have to bow up. We're on defense, we're paid to stop them from scoring.”

The Rams allowed only eight first downs and 145 yards. But despite the defensive heroics, they fell to 5-3 in the tough NFC West.

The Rams have a bye next Sunday, but there's more pressure to come.