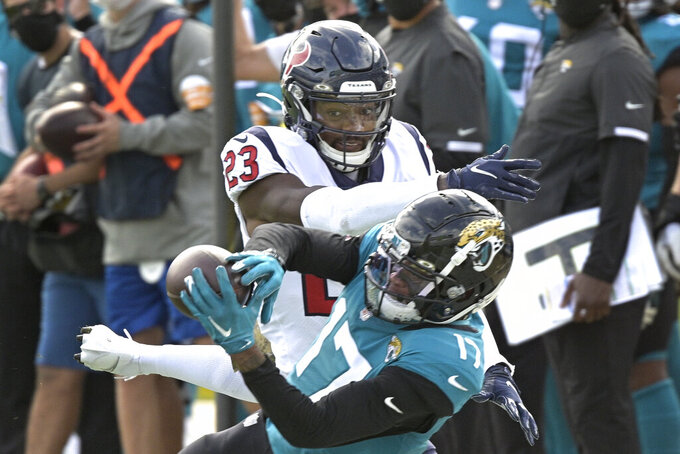 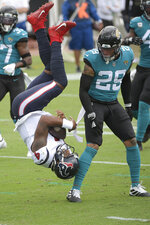 JACKSONVILLE, Fla. (AP) — In what could be his final two months on the job, Jacksonville Jaguars coach Doug Marrone is making changes.

Some sweeping, most subtle.

Marrone started rookie quarterback Jake Luton over backup Mike Glennon, benched 2018 first-round draft bust Taven Bryan and planned to use dynamic receiver Laviska Shenault in a variety of ways before the rookie pulled a hamstring in the first quarter against Houston. Jacksonville also blitzed more (17 times) than it has in any game this season.

None of those moves helped end the team's skid, though. The Jaguars (1-7) dropped their seventh consecutive game, 27-25 to the rival Texans on Sunday, and inched closer to their ninth losing season in the past 10 years.

They’re halfway home to another top-five draft pick and probably another significant reboot.

“Whatever happens at the end of it, we’ll be better coaches and better players for it," Marrone said.

Instead of sulking, pointing fingers or lamenting where it went wrong, Marrone is doing all he can to alter the team’s current course — even if it ends up costing Jacksonville a shot at prized Clemson quarterback Trevor Lawrence.

Admirable, for sure. But it might not be in the best, long-term interest of the franchise.

Then again, since the Jaguars face the toughest schedule of anyone in the second half of the season, it might not matter.

Jacksonville will likely be underdogs in each one, so 1-15 is certainly in play. It would be the worst record in the team’s 26-year existence and essentially make owner Shad Khan’s decision to fire Marrone and general manager Dave Caldwell a no-brainer.

Khan gave Marrone and Caldwell a chance turn things around in 2020 after he essentially pinned the team’s recent troubles on personnel chief Tom Coughlin, who made the final call on drafting running back Leonard Fournette over stars Deshaun Watson and Patrick Mahomes, re-signing flawed quarterback Blake Bortles and then selecting Bryan over reigning NFL MVP Lamar Jackson.

Moving on from Fournette is the only decision that's panned out so far.

The Jags nearly broke an NFL record for defensive futility. They fell three points shy against Houston of becoming the first team in history to allow 30 or more points in seven consecutive games in a single season. Instead, they will share the mark with the 1968 Denver Broncos and the 1984 Minnesota Vikings.

The latest slide has the fanbase already focused on the future, an all-too-familiar feeling in Jacksonville well before Thanksgiving.

Running back James Robinson has four touchdowns in three games, further establishing himself as the team’s most consistent player. The undrafted rookie from Illinois State has 805 yards from scrimmage, including 580 rushing, to go along with seven touchdowns.

DJ Chark caught seven passes for a season-high 146 yards, including a 73-yard touchdown on the third play of the game. He could be the biggest beneficiary of the switch from Minshew to Luton, who has the arm to get the ball down the field.

Bryan’s days in Jacksonville are dwindling. The 29th overall pick in the 2018 draft has been beyond disappointing in three seasons. He has 64 tackles, including 3½ sacks, in 40 games and now been replaced in the starting lineup by undrafted rookie Doug Costin.

As expected, quarterback Gardner Minshew (thumb) won't play this week. ... Josh Lambo was placed on injured reserve Monday after re-injuring his hip attempting an onside kick against the Texans, forcing Jacksonville to switch kickers for the sixth time in nine games. Jon Brown, who made his NFL debut in Week 6, will be promoted from the practice squad and kick against Green Bay. ... Shenault (hamstring) and Costin (concussion) could miss time.

12 — tight ends who have caught passes for the Jaguars in the three seasons since they unceremoniously dumped team captain and 2006 first-round pick Marcedes Lewis, who will face his former team for the first time Sunday in Green Bay.

Give Luton enough starts to see where he fits on the roster moving forward.