Lions will hold out hope all week that Stafford can play 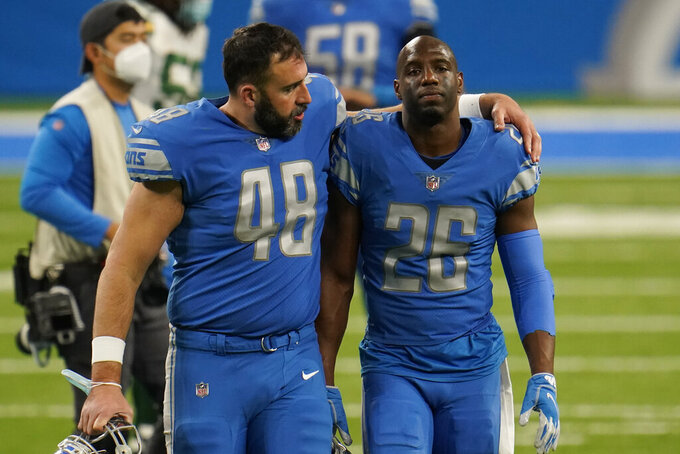 The Detroit Lions will hold out hope as long as they can that Matthew Stafford can play at Tennessee with banged-up ribs.

“We’ll take it until the end of the week," interim coach Darrell Bevell said Monday. “He’s a little bit better this afternoon than he was this morning."

Stafford was knocked out of Sunday's 31-27 setback to Green Bay with a rib injury. The veteran quarterback appeared to get hurt while diving for a first down at the Packers 5 midway through the fourth quarter.

Stafford stayed in the game to hand off to Kerryon Johnson for a touchdown on the next play, but was evaluated by the team's medical staff on the sideline. Stafford went toward the locker room, returned to throw passes near the benches before going back out of sight.

Detroit (5-8) probably will keep Stafford out completely or limited at most during practice leading up to Sunday's road game against the AFC South-leading Tennessee Titans (9-4) knowing he has played through various ailments in the past.

“That guy loves to play football and it’s going to take a lot to keep him out," Bevell said.

Chase Daniel replaced Stafford against Green Bay and led a drive that ended with Matt Prater’s 32-yard field goal with 1:49 left to pull Detroit within seven points. The team's third-string quarterback is David Blough, who started five games last year with Detroit after it acquired the undrafted rookie from the Cleveland Browns.

The Lions are competing for four quarters under Bevell after not appearing to do so for fired coach Matt Patricia's last month.

Detroit looked as if it might get routed when Aaron Rodgers opened the game not missing a throw on two touchdown drives. The Lions kept it competitive and were inches away from recovering an onside kick with 1:49 left. The previous week in Bevell’s debut as interim coach, they rallied from a 10-point, fourth-quarter deficit to win at Chicago.

Detroit lost its last four games with Patricia by at least two touchdowns and were shut out for the first time in more than a decade in one of those defeats.

The secondary is shaky at best. Players who were expected to be backups have been pushed into starting roles with injuries to rookie Jeff Okudah and veteran Desmond Trufant.

Detroit's defensive backs are struggling to stay with receivers and it doesn't seem to matter if they're facing a two-time MVP or embattled Bears quarterback Mitchell Trubisky.

The Lions have missed on a lot of draft picks, but T.J. Hockenson is not one of them. Detroit drafted him No. 8 overall last year and the former Iowa star is having one of the best seasons by a tight end in franchise history. Hockenson had six catches for 43 yards and a touchdown against the Packers. He has 58 receptions for 657 yards and six scores this season.

Rodgers didn't waste any time picking on Lions cornerback Amani Oruwariye. Rodgers threw toward Oruwariye for a completion on his first snap and again on his first two touchdown passes. Oruwariye, drafted by Detroit in the fifth round last year, was also called for holding on a third down in the pivotal third quarter.

Okudah is scheduled for surgery Tuesday for a groin injury that left him inactive against the Packers. The No. 3 overall pick in this year's draft had one interception this season and was healthy enough to play in just nine games.

1 — The New York Times reports the Lions have a 1% chance of making the playoffs, slim odds that were relayed to Bevell.