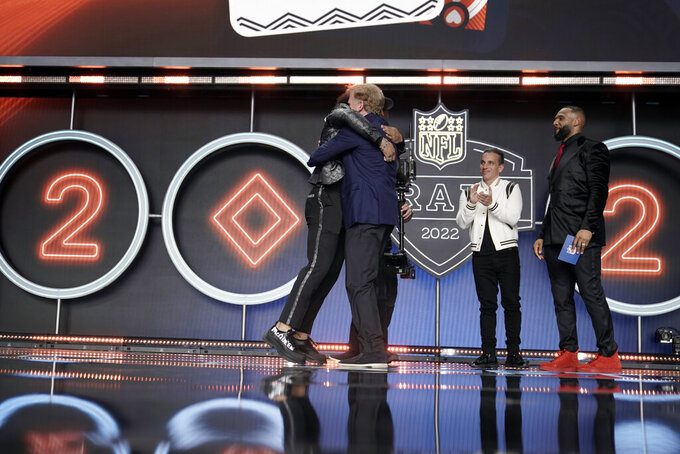 LAS VEGAS (AP) — Sebastian Maniscalco got the chance to be onstage at the NFL draft and, along with former Bears star running back Matt Forte, announce the team's second-round selection Friday night.

The Chicago-based comedian, who is appearing in Las Vegas this weekend and during May, understood why Bears management did not allow him to actually make the pick.

“They would probably have a better shot if I had picked it,” he says of the choice, which was Washington cornerback Kyler Gordon at No. 39 overall. “Historically, they are not doing so well, I am a little disappointed there has not been a lot to cheer about the last 10 to 15 years.”

Still, Maniscalco has no qualms about letting the so-called experts handle the drafting.

“I am 48 years old and got two kids ages 5 and 2,” he adds. “I am in Las Vegas and it is mind boggling to see how many grown men are walking around with football jerseys on and this is their life. God bless them. I have no time to look who caught 600 balls at the college level. I watch, but when they have me on these shows I think they are having me on because I don't know anything.”

When Maniscalco appeared on ESPN's Game Day and was asked to make some college game predictions, the reaction was not so pleasant from some fans.

“I got ripped to shreds by the die-hards,” he says with a laugh. “How dare you have a comic on?”

If there was a draft of comedians, however, Maniscalco would be right at home. His material generally is family based, and many of his choices go that route, as well.

"Bill Burr and I have had a history, he is actually the first guy I met when I was moving into my apartment complex in LA. He is in the elevator, I knew his work, so I said, `You are Bill Burr, I am just in from Chicago, starting out as a standup comic.' He said, `Come see me at the Laugh Factory' and was nice enough to get me into it and I loved it.

“Jim Gaffigan, Jerry Seinfeld, their material is very clean and very relatable and observational. Taylor Tomlinson, she is doing theaters and touring and on Netflix.”

From the past, he points to Don Rickles and Johnny Carson.

“In today’s climate would Rickles be so successful? I don’t know,” Maniscalco notes. "I think the majority of the people out there would like to hear it because if you can’t laugh at yourself and other people, what is the point?

“With Carson, I loved his ability to be silent and funny at the same time, with impeccable timing. You don't see that timing in a lot of comedians today. A lot of comedians, it is a constant stream.”

On tour now, Maniscalco recently completed a Netflix film “About My Father,” which he wrote and in which he plays himself. He hosted the Lionsgate CinemaCon Presentation on Thursday in support of the movie.

He and co-author Austen Earl sent the script to Robert DeNiro, figuring it was a long shot for the iconic actor to show interest. Not only did DeNiro like the script, he insisted on meeting Sebastian's dad, Salvatore.

“He wanted my father’s phone number to start picking his brain, and then meet my dad,” Maniscalco says of Salvatore, a hair dresser by trade. “My father went to Oklahoma to spend three days with him, and I can’t believe this is happening. Next thing, my dad is teaching him to do a dye job, and is on the set and is teaching the whole process in this hair salon. It was really crazy to witness.”

On Friday, Maniscalco got to witness the craziness of an NFL draft from a unique perspective. Forte is one of his favorite former Bears, and they got to share Chicago's first selection of 2022 because the team had traded its opening-round spot to the Giants last year to get quarterback Justin Fields.

“The pick is a big deal,” he says. "I got people from Chicago calling me, telling me, `This is it bro, if this is a Hall of Famer they will show video of you picking him forever.' People already thinking this pick will be a fantastic addition to the team.

"You know, doing these special things, whether it's the pick or doing a movie with Robert DeNiro or the MTV music videos, those are very nice and cemented in history. That's kind of a piece of history for the family.

“My youngest kid is not yet 3. I just hope my career is as successful when he is 15 and he isn't saying, `You were making the pick for the Bears and now you are playing a restaurant in New Jersey?”