Panthers turning up the pressure during 2-game win streak 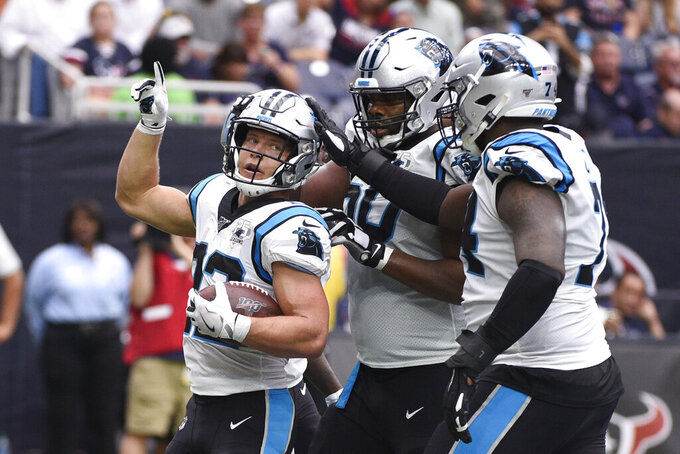 Carolina Panthers running back Christian McCaffrey (22) celebrates his touchdown against the Houston Texans during the first half of an NFL football game Sunday, Sept. 29, 2019, in Houston. (AP Photo/Eric Christian Smith) 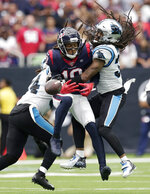 CHARLOTTE, N.C. (AP) — When Panthers quarterback Kyle Allen walked down the corridor to the locker room after Sunday's 16-10 win against the Houston Texans, he sought out linebacker Shaq Thompson and gave him a hug.

The defense carried the Panthers to a second straight win on a day when Allen fumbled the ball away three times.

After a slow start to the season, Carolina's fourth-ranked defense is beginning to look dominant with 14 sacks and four takeaways in the last two games against elusive quarterbacks in Kyler Murray and Deshaun Watson while posting back-to-back wins. Carolina's 18 sacks are tied with New England for the most in the NFL.

"I thought the rush was excellent," said coach Ron Rivera, who took over defensive play calling in the second half of last season. "I thought the guys were pressuring a very mobile quarterback who gave us fits at times and created some things."

Rivera hasn't been able to use the 3-4 defensive front the team worked on extensively during training camp as much as he's wanted, but certainly has been creative in mixing personnel.

Feeding Christian McCaffrey the ball. With Cam Newton sidelined because of a foot injury, McCaffrey is the Panthers' best player and offensive coordinator Norv Turner is using him to the fullest — maybe even a little too much. McCaffrey had a career-high 37 touches for 179 yards on Sunday, including a rushing touchdown and an incredible third-down catch to help move the chains.

Allen called it a "massive game" for the third-year running back.

He leads the NFL with 629 yards from scrimmage and it's not even close.

For the third time in four games, McCaffrey played every offensive snap. The only question is whether Turner is using McCaffrey too much and if the running back will begin to wear down as the season progresses.

Opening drives. The Panthers have turned the ball over on their first possession in all four games, a remarkable string of incompetence. The last two opening drives have ended with fumbles by Allen.

Thompson. The long-time heir apparent to Thomas Davis is finally beginning to show his true potential and ranks sixth in the league in tackles with 40. Thompson had 12 tackles against the Texans, including one sack. He also broke up a pass.

Allen. After a nearly perfect four-touchdown performance in a 38-20 win over Arizona, some Carolina fans were ready to anoint him the next coming of Tom Brady. But Allen has now fumbled five times in the past two games, losing four, which is cause for concern even though the Panthers have won both games. "I've got to have two hands on the ball all week this week" in practice, Allen said. "I haven't played in a lot of games, but I need to get those reps with ball security."

Safety Eric Reid left the locker room with his foot in a boot, but it was believed to be precautionary since he finished the game. Newton (foot), cornerback Donte Jackson (groin) and guard Trai Turner (ankle) sat out Sunday with injuries.

10 of 11. Kicker Joey Slye has been dynamite filling in for Graham Gano (injured reserve), missing only one of his 11 field goal attempts this season. He's 4 of 5 from beyond 50 yards, including a 58-yarder on Sunday.

The Panthers have shown they can win games on the road. Now, can they win at home? Carolina returns next Sunday to host Jacksonville, which has also won its last two games.